A series of escalations across the Israel-Syria border is renewing fears that the Syrian civil war could erupt into open conflict between regional powers.

The episode began on Feb. 10, when an Israeli F-16 was shot down in Syrian airspace by the Syrian military. Both pilots managed to eject and were collected in northern Israel and taken to hospital. The jet had been targeting Iranian facilities within Syria after an unmanned Iranian drone was shot down after purportedly breaching Israeli airspace around the occupied Golan Heights. Following the downing of the F-16 – the time Israel has lost a jet in decades – the Israeli government responded with a new wave of attacks on Iranian military assets in the vicinity of Damascus.

The tit-for-tat attacks have already broken one taboo of the Syrian civil war by bringing the powerful militaries of Israel and Iran into direct conflict. There’s now fear that both sides will be impelled to escalate further, and the yet unresolved Syrian conflict will provide a perfect theatre in which to do so.

Israel and Iran: a fine balance of strategy and acrimony. Israel and Iran view each other as existential security threats. For Israel, Iran is the financial, military, and ideological wellspring of the hateful rallying call to ‘push Israel into the sea.’ For Iran, Israel is the festering injustice and island of US imperialism that helps to justify the very existence of its Islamic regime (which paradoxically gives Israel more political utility as a hypothetical boogeyman in a cold war rather than a tangible foe in a hot war). Put simply, the two regimes view each other through a zero-sum lens: any gain for Israel is a loss for Tehran and vice versa. 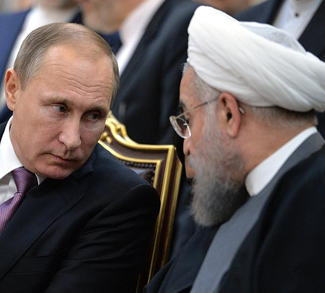 Situation Reports February 20, 2018
Back to Top