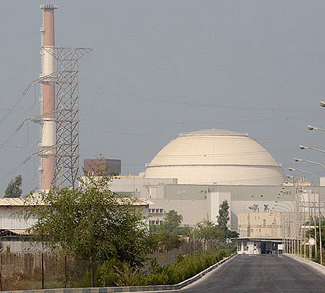 Iran’s nuclear program has put it on a collision course with the United States and Israel as both countries reject Iran’s insistence that the program is for peaceful civilian purposes. The chilling prospect of military confrontation in the Middle East between Israel and Iran looms large. But is war the inevitable outcome or can it be averted?

The Islamic Republic of Iran’s defiance of international requests for the transparency of its uranium enrichment process, which it considers a right under international law, has landed it on a dangerous path to military conflict. Israel rejects the idea that Iran’s nuclear program is for civilian purposes. Instead, it suspects that Iran’s program is a cover for the development of a nuclear warhead. According to the Israeli government, a nuclear Iran would be unacceptable as it would pose an existential threat to its very existence. Israeli leaders have frequently cited Iranian President Mahmoud Ahmadinejad’s calls for the destruction of the state of Israel as proof of this suspicion.

The United States also has much to be concerned about if Iran were to go nuclear. U.S. officials contend that a nuclear-armed Iran would compromise the security of Israel–their closest ally in the region. But the truth is that they also fear it would disrupt the strategic balance of power in the Middle East and could set off an arms race in the region.

Differing Positions on a Military Strike

Both Israel and the United States have made it clear that they would prevent Iran from developing a nuclear weapon using all necessary means including the use of force [1]. But having felt the effects of two large-scale wars, in Afghanistan and Iraq, the United States has no appetite for another military conflict in the region. However, the Israeli government has been impatient, hinting that it may strike Iranian nuclear facilities in the coming months. While Obama has assured Israel that it will “always have its back,” he is also urging Netanyahu to give sanctions more time to take effect and is requesting him to halt any plans for an imminent military strike against Iran [2].

There are differences of opinion between Israel and the United States on the Iranian nuclear issue. Israeli officials believe that Iran would cross the ‘red line’ once it enriched to weapons-grade uranium. The only guarantee that Iran would not develop a nuclear weapon, according to them, is if it halted its uranium enrichment facilities entirely. On the other hand, American officials put the red line at the development of a nuclear weapon itself and not necessarily the enrichment process alone [3]. They are being cautious of an attack on Iran’s nuclear facilities, hoping instead that the effects of the recent round of sanctions will bring Iran back to the negotiating table. In short, Israeli government officials believe that the time to act decisively and forcefully is now, whereas American officials believe more time is needed. But does Iran truly intend to go nuclear?

In its most scathing report yet, the International Atomic Energy Agency (IAEA) stated last November that Iran is on the brink of developing a nuclear arsenal [4]. The UN nuclear watchdog chief, Yukiya Amano, recently expressed “serious concerns” that Iran may be hiding secret atomic weapons work [5]. But short of any ‘smoking gun,’ it still remains unclear whether Iran actually intends to develop a nuclear weapon or whether it merely wants to retain a turnkey capability by choosing to produce it when it feels the need to do so.

Iran’s possession of a nuclear weapon would pose the greatest danger to itself more than any other state. It would face grave repercussions if it transferred nuclear weapons to a foreign state and it would be assured of its own destruction if it ever recklessly used it against its neighbours. But this assumes, of course, that the mutually-assured destruction (MAD) doctrine would apply to a theocratic state whose president claims to communicate with the hidden Imam and who might welcome an apocalyptic war as a way of hastening the hidden Imam’s arrival [6].

Unfortunately, there are hawkish elements on both sides who are quick to call for, or provoke, military conflict. An attack by Israel would be welcomed by many hardline Iranian clerics who believe that such an act would garner international sympathy for Iran and would relieve Iran of its internal political problems [7]. On the other side, hawkish officials both in the Israeli government and in the U.S. Republican Party are advocating a preventive military strike on Iran despite the lack of an imminent threat.

It is important to note that a military strike on Iran’s nuclear facilities would not be an Israeli precedent. In 1981, Israel initiated an air strike against Iraq’s Osirak nuclear reactor suspecting it to be a cover for a nuclear weapons program. Furthermore, in 2007, it attacked a military complex in the Deir ez-Zor region of Syria after growing suspicion that the complex was being used for weapons-grade material for a nuclear bomb. In both cases, neither opponent responded militarily and both air strikes came as a complete surprise. But Iran would be a different scenario altogether.

Consequences of a Military Strike

An Israeli air strike against Iran’s uranium enrichment plant in Natanz or the uranium conversion plant in Isfahan would drive Iran’s nuclear program underground where it would be practically unreachable. In response to an attack, Iran might use militant groups, like Hamas in Gaza and Hezbollah in Lebanon, as proxies to destabilize the region and compromise the status quo. It might also alert its ruling Shi’ite allies in Iraq to instigate further political turmoil in that unstable state at a time when US forces have withdrawn. A strike against Iran might also deflect attention away from the regional uprisings, allowing autocratic rulers to further suppress the internal revolts and consolidate their power domestically. But more than anything else, a military strike on Iran’s nuclear facilities would likely encourage it to seek and develop a nuclear weapon quicker than ever before, assuming of course that it did not intend to do so already.

From the Israeli government’s perspective, all of these concerns are secondary. Israeli officials may reason that the costs of military action now might be less costly than containing a nuclear Iran in the future. But not all experts agree that a nuclear Iran would pose an existential threat to Israel. In fact, three leading Israeli security experts, which include the current Mossad chief, a former chief and a former chief of staff, have all argued that Israel would face no such risk. An Israeli strike might instead strengthen the Iranian regime internally. It could also embolden Iran’s nuclear intentions forcing Arab states to feel the need to do the same [8].

Despite the discourse on existential threats, there is minimal support for a unilateral Israeli strike against Iran amongst Israeli citizens. Less than one-fifth would support such an action; less than half would support a strike with the condition that the United States was also involved [9]. But even then, there are still level-headed Israeli experts, like ex-Mossad chief Meir Dagan, who insist that a strike against Iran is a mistake since it would fail to halt Iran’s nuclear ambitions and would lead to a protracted war [10]. U.S. Defense Secretary Leon Panetta has voiced similar concerns. He argues that a military strike on Iran would have “unintended consequences” for the region [11].

Unfortunately, time is running out for a peaceful resolution to the conflict because of Israel’s impatience and Iran’s stubborn defiance. If there is no significant progress in the upcoming months, the risk of a military action against Iran will be very high, potentially culminating in a military confrontation in the late spring or early summer. The only question that would remain is how Iran responds to an attack. If Israel decides to attack unilaterally (which is a very real possibility), the United States might only participate in the conflict once Iran retaliates. The great hope for preventing a conflict rests with whether the sanctions on the Iranian regime will pressure them to comply with international demands and whether Israel will reconsider its military options. Yet as painful as those sanctions are, they seem to be doing little to curb Iran’s defiant behaviour.

The greatest and cheapest deterrent to conflict is constructive diplomacy. Regretfully, this tool of international relations has been heavily under-utilized in an international system characterized by power politics. Let us all hope that cooler heads prevail.