Despite Israel and Hamas’ separate announcements of a ceasefire in Gaza, prospects for a regional peace ensuring Israeli stability and security are likely to collapse, resulting in the escalation of anti-Israeli militancy and Israel’s increasing isolation.

Israel bypassed an Egyptian-French initiated ceasefire proposal, backed by Saudia Arabia, the EU, the U.S., and Russia, to announce a unilateral ceasefire on Saturday following its three-week offensive aimed at halting Hamas’ rocket attacks against southern Israel.  The ceasefire went into effect by midnight.

Although Hamas’ Syrian-based exiled leadership declared the fight would continue, by Sunday, they too announced an immediate weeklong ceasefire, in which Hamas would allow Israeli troops to leave Gaza.

The international community has welcomed the ceasefire, yet the ceasefire remains tenuous and is unlikely to provide relief for the region, in particular Israel, for although the Israeli offensive is popular at home, single-handedly reviving the ruling party Kadima’s electoral hopes, it has come at a grave cost: Israel is now further away from achieving a lasting, durable peace in the Middle East than since the 1973 Yom Kippur War.

An emergency Arab summit hosted by Qatar in its capital Doha on Friday not only condemned Israeli action, but also produced the first official break in Israeli-Arab relations since the offensive began: Qatar and Mauritania have suspended contacts with Israel, and Syria has broken off its Turkish-mediated peace negotiations with Israel while rejecting a Saudi proposed Arab peace initiative, a comprehensive peace plan that was widely viewed as the best chance for a lasting and durable peace between Israel and its Arab neighbours.

The Doha Summit has further exposed a rift in the Arab world that threatens to endanger Israeli hopes for comprehensive peace, for Western-backed regional heavyweights Egypt and Saudi Arabia, as well as Hamas’ adversary Fatah, boycotted the summit and hosted a rival summit on Saturday in Kuwait.  No doubt then, that rival Arab groups—those with Iranian ties versus those backed by the West—will continue to exploit the Israeli-Palestinian situation to their own ends, ensuring decades of further direct conflict and proxy wars.

Thus Israel has ended Operation Cast Lead with three of its five direct neighbours—Syria, Lebanon, and the Palestinian territories—increasingly hostile.  Should Hosni Mubarak’s dictatorship fail in Egypt, where both the growing opposition and popular view reflects swelling anti-Israeli sentiment, the net result will be more neighbouring enemies for Israel since the historic Camp David peace accords.

And beyond her immediate neighbours, Israel’s offensive has caused a similar backlash, with Israel’s closest ally in the region, Turkey, calling for Israel’s ouster from the UN and asking the West to engage with Hamas.

Meanwhile, worldwide anti-Israeli protests have revealed the failure of Israel’s PR offensive.  With over 6,000 Palestinian casualties (approximately 1,100 killed and 4,900 wounded) compared to 13 Israeli dead (three civilians, and four of the ten soldiers killed by friendly fire), the Israeli offensive has been widely condemned as disproportionate by the international community, save for the U.S. and Canadian governments, which continued to offer support to Israel despite the growing list of alleged Israeli war crimes and crimes against humanity.

The IDF’s Thursday shelling of UN headquarters in Gaza with alleged illegal chemical weapons only exacerbated Israel’s isolation in the conflict.

And yet Israel has declared victory.  Prime Minister Ehud Olmert stated Saturday following a Security Cabinet vote on the unilateral ceasefire that the Jewish state’s objectives have been met, bolstered by a Friday bilateral agreement with the U.S. aimed at stemming Hamas’ rearmament.  Nonetheless, a battered Hamas still retains control of Gaza, and although momentarily closed off from its Iranian backers, will no doubt build on Israel’s massive destruction of the Gaza Strip to fuel anti-Israeli armed resistance in the region.

Thus, in spite of international relief at the ceasefire, the fall out from the offensive will place Israel in a geostrategic scenario worse than before its offensive against Hamas.

The United States may never be able to prosecute an alleged plotter of the September 11, 2001 attacks because he was tortured, a top Pentagon official said in an interview.

A U.S. district court has granted a watchdog group’s emergency request for an extended order “to protect missing White House e-mails,” according to a press release from the National Security Archive, an independent non-governmental research institute.

America may be forced to intervene in Mexico to prevent the country’s “rapid and sudden collapse” at the hands of organized crime and drug cartels, according to the US army.

Most of America’s largest publicly traded corporations — including several that are receiving billions of dollars from U.S. taxpayers to finance their recovery — have set up offshore operations that could help them avoid paying U.S. taxes on their profits, a government study released Thursday found.

The Central Intelligence Agency (CIA) said Thursday there is no evidence that proves Tehran is edging towards developing nuclear weapons.

The United States and Israel signed an accord on Friday aimed at stopping the smuggling of weapons into the Gaza Strip, a move Washington hopes will lead to a durable ceasefire to end Israel’s three-week offensive.

The British government is set to throw out a 165-year old law that obliges the Bank to publish a weekly account of its balance sheet – a move that will allow it theoretically to embark covertly on so-called quantitative easing.

Britain’s foreign minister said on Tuesday he believed the Pakistan state did not direct the Mumbai attacks, contradicting accusations from the Indian government that state agencies were involved.

Russian Prime Minister Vladimir Putin on Monday ordered the resumption of gas supplies to the European Union, easing a crisis that has hit a swathe of countries and highlighted their dependence on Russia.

Following a refusal on Tuesday, Ukraine’s national energy company Naftogaz refused for a second day to accept Russian gas due to be transited to Europe, Russia’s gas monopoly Gazprom said on Wednesday.

The Ukrainian president denied on Tuesday that Kiev was blocking a Russian gas transit to Europe or stealing gas, following a failure by Russia to make a test delivery through Ukraine.

Iranian banks illegally shifted billions of dollars through American financial institutions in recent years, and U.S. authorities suspect some of the money may have been used to finance Iran’s nuclear and missile programs.

Iran has arrested four Iranians accused of involvement in a U.S.-financed plot aimed at toppling its Islamic system of government, the judiciary said on Tuesday.

Palestinians and Israeli left-wing activists claim that in the wake of Operation Cast Lead, the Israel Defense Forces has reintroduced the use of a semiautomatic rifle that uses live ammunition to disperse crowds that was banned after the second Intifada.

Israeli leaders are leaning toward declaring a unilateral halt to their offensive in the Gaza Strip instead of entering into a formal, Egyptian-brokered ceasefire with Hamas, Israeli political sources said on Friday.

Guerrillas in Lebanon rocketed northern Israel on Wednesday for the second time in a week, drawing Israeli artillery fire and threatening to drag the Jewish state into a second front as it battled Hamas in the Gaza Strip.

Israeli troops and Hamas fighters traded fierce gunfire on the streets of Gaza City on Tuesday as Palestinian president Mahmoud Abbas accused the Jewish state of trying to “wipe out” his people.

Israeli artillery shells struck the U.N. headquarters in the Gaza Strip on Thursday, setting a food warehouse ablaze and drawing a sharp rebuke from the visiting U.N. chief who called it an “outrage.”

India’s army chief said on Wednesday Pakistan had deployed extra troops along their common border since the Mumbai attacks but India had not responded in kind.

Pakistan said on Thursday security forces had closed five training camps run by Lashkar-e-Taiba, the group blamed for the Mumbai attack, and arrested 124 of its leaders and those of a related charity.

Ethiopian troops supporting Somalia’s government withdrew completely from Mogadishu on Thursday, witnesses said, leaving a power vacuum in the capital that could lead to more bloodshed.

South Africa’s appeals court on Monday opened the way for prosecutors to pursue graft charges against ruling party leader Jacob Zuma only months before he is expected to stand for election as president. 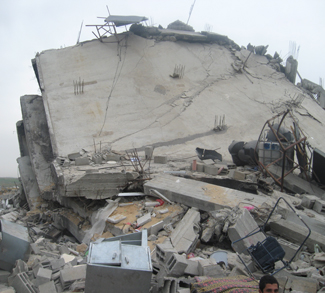