After years of gradually losing its standing as a neutral arbiter between the Israelis and Palestinians, the U.S. government finally and openly declared sides during the Gaza conflict.  Unless President Barack Obama delivers on his promise to chart a new course, the U.S. will lose its place as a primary Middle-East mediator.

In spite of its claims as an honest broker in the Middle East, the United States has long provided arms, diplomatic cover (utilizing its Security Council veto without fail), and logistical and technical support to Israel, and in the wake of the Gaza offensive, pledged increased integration in future U.S.-Israeli military actions against the Palestinian territories.

In fact, the U.S. military supplied some of the most powerful ordnances utilized by Israel against the Palestinians, including in actions described as war crimes and crimes against humanity by international legal scholars and analysts.

As America’s closest ally in the Middle East, the United States provides more military aid to Israel than any other country in the world.  Interestingly, the U.S. also does business with Israel’s enemies, however, a long-standing U.S.-Israeli agreement demands that the U.S. provide Israel with greater quantity and better quality weaponry – usually a couple of generations ahead of the U.S.’ Arab clients.  In fact, it is this very guarantee of unlimited military superiority that enables Israel to continue its current policies confident in an enduring imbalance of power in the Middle East.

Yet it is the timing and manner of recent shipments that are, potentially, more threatening to any prospects of peace in the Middle East.

Outside of its regular delivery schedules, the U.S. military recently provided Israel with an emergency shipment of 5.8 million pounds of net explosive weight, a very large quantity according to experts.  The shipment, requested early last month, was to be loaded December 15th – just eleven days prior to Israel’s launching Operation Cast Lead, the six-month old Israeli plan to wage war against the Palestinians by invading Gaza.

The timing of the shipment raises serious inferences that the U.S. was not only aware of the planning, but may have been secretly involved in strategizing the attack against Hamas, the democratically elected Palestinian majority party, listed as a terrorist group by the U.S.

The use of commercial charters to move U.S. arms into Israeli arms (to be used against the Palestinians) is extremely rare, and exposes not only the fact that the over-stretched U.S. military had no resources to move the secretive armaments itself, but that the shipment was on such an ‘urgent’ basis, that the world’s largest military could not wait until a ship or ships capable of moving the weapons became available.

In fact, the U.S. Military Sealift Command (MSC) has recently chartered another commercial interest to ship 3,000 tonnes of ammunition (an extremely rare and huge quantity), labeled  “hazardous material” and mentioning explosive substances and detonators, to arrive in Israel by January 25th to January 31st.

Apparently, then, the next major phase (Phase IV) of Israel’s Operation Cast Lead will be launched at the end of the month, or the beginning of the next month, just after President Obama’s inauguration.

The fact that the U.S. honored this request for such a huge quantity of explosive armaments by placing the contracting with a German shipping contractor on December 31, five days into the Israeli invasion, points to the United State’s active participation in planning the Israeli offensive on Gaza.  It would have been a logistical impossibility for the U.S. to have filled such a huge and rare order without having prior knowledge of Israel’s immediate strategic intent vis-a-vis Gaza.

Nor is U.S. involvement limited to supplying the weapons utilized by Israel to wage war against the Palestinians.

It was recently revealed that the U.S. Army Corps of Engineers has been actively assisting the Egyptian military in neutralizing tunnels under the Gaza-Egypt border used by Palestinians to circumvent the Israeli-Egyptian blockade – for which the U.S. government has conferred $25 million.

And, U.S. military and monetary assistance to the war in Gaza will not end there.

On Friday January 16th, former U.S. Secretary of State Condoleezza Rice signed a U.S.-Israeli accord pledging American technical, intelligence and logistical support in Israel’s anti-Hamas actions, with a particular view of strengthening the anti-Palestinian blockade of the Gaza Strip.

By formally ending the U.S.’ role as chief mediator in the Israeli-Palestinian conflict, former President Bush has tied the Obama administration’s hands, for it is doubtful Obama will renege on the recent U.S.-Israeli deal, despite the fact that it was signed at the 11th-hour on lame-duck orders.

As anger mounts at the devastation in Gaza, the U.S.-Israeli deal also ends the political life of any and all Palestinians closely allied with the U.S., such as Fatah’s Mahmoud Abbas.

The European Union and perhaps, an emerging Mediterranean Union, will have supremacy vis-a-vis Middle East peace.  Perhaps this explains the emergence of the French-Egyptian peace proposal. 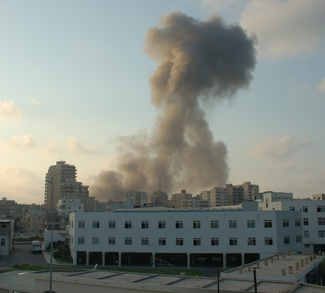 Situation Reports December 30, 2008
Back to Top