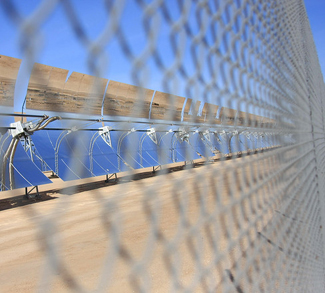 A few years back, an article appeared in the Tripoli Post outlining Libya’s energy prospects for Europe. What made the article different, however, was its focus on solar power rather than oil as the Libyan asset appealing to European clients across the sea.

It’s not often one hears about Libya’s energy portfolio outside of oil and gas. Since the discovery of oil in 1959, Libya’s economic progress has been driven by hydrocarbon profits. Typically, oil and gas wealth has represented up to 90% of Libya’s income. Nonetheless, renewable energy has been a part of Libya’s energy policy since the 1970’s. Libya’s Center for Solar Energy Research and Studies was established in 1978. In 2007, Libya also created the Renewable Energy Authority. The Authority’s Planning and Studies Department was working on structured plans for balancing renewable and traditional energy sources as recently as 2011.

“There is a plan [in Libya],” explained Dr Amin Al-Habibeh of Nottingham Trent University in 2011, “for renewable energy sharing with traditional energy to reach 30% by the year 2030.” The plan, launched during the Gaddafi era, included wind energy, but had a stronger focus on concentrated solar power and solar-related power generation. Indeed, even in the capacity of one of Europe’s largest oil exporters, Libya has attempted a certain focus on diversifying its energy portfolio. The Planning and Studies Department for Renewable Energy was in charge of diversifying Libya’s energy production methods. In 2007, the Green Mountain Project outlined a framework for antiquities preservation through the creation of a green village that would preserve Libya’s Roman history while also allowing for the development of a self-sustaining community through renewable sources.

In a sense, such projects are not surprising given the strong potential for solar power in Libya. Comprised of up to 88% desert, Libya enjoys long hours of sunshine that are evenly distributed throughout the year. Solar power therefore represents an energy source that would be more stable than e.g. wind power. In addition, Libya’s proximity to the Tropic of Cancer ensures enough solar radiation to provide the country with the energy equivalent of over 4,000 barrels of oil a day. “This number,” explains Dr. Al-Habibeh, “is 6 times more than [typical] Libyan production of oil.” At the very least, his findings claim, renewable sources like wind and solar can complement conventional energy sectors by being used during peak loads on the electric grid, a time when conventional systems may struggle to cope.

The idea of a Libyan renewable sector is not new. However, Libya’s traditional reliance on hydrocarbons has intensified due to damaged equipment in the war in 2011. Media coverage and government bodies have neglected a renewable dialogue in favor of analyzing the future of Libya’s hydrocarbon recovery. Yet, amid news of returning international oil firms, is it not worth examining how Libya could work toward a renewable sector that complements its hydrocarbon recovery?

Eni, Libya’s traditional oil partner recently announced an intention to invest up to 8 billion USD in Libya’s hydrocarbon infrastructure. At the same time, Eni itself boasts a well-developed research department dedicated to solar power production. Their latest innovations have driven down the costs of solar power infrastructure by replacing the traditional material of silicone with cheaper organic composites. In addition, Eni has also developed Concentrated Solar Power Systems (CSP). CSP has the potential to run conventional thermal-based systems that fuel most power plants. Most apt for Libya’s ocean proximity has been Eni’s experimentation with CSP systems acting as co-facilitators of desalinated water production alongside electricity production.

A national policy that merges hydrocarbon and green energy does not have to represent a conflict of interest. Rather, it may represent an opportunity to merge two traditionally distinct energy frameworks to present several advantages. First, although Libya has a renewable energy research base, its progress is likely to have stalled due to the civil war. However, returning oil firms like Eni and also BP have their own research departments for solar power. The stable funding such private firms enjoy, in addition to their green energy specialization and, in the case of Eni, significant cost achievements in CSP could therefore be merged with Libya’s desert properties to provide a gradual energy buffer as the hydrocarbon sector recovers. The 2-3 year time-span for the installation of solar power plants would thus balance the predicted decade required for hydrocarbon sector recovery. Second, it may even be possible to use green energy development to increase competition between returning oil firms to Libya’s benefit. Oil firms with well-developed CSP capabilities could be required to transfer their knowledge to the Libyan state, assisting in the establishment of a solar energy sector while also assisting in the repair and updating of oil and gas equipment. In return, firms agreeing to such conditions would receive prioritized access to oil and gas fields. Subsequently, firms that do not or are unable to meet such conditions may be willing to invest in solar energy development in Libya’s deserts, if only to still be able to bite on the oil pipe.

Compared to the precarious status quo of Libya’s oil and gas infrastructure, solar energy has certain long-term advantages that could help Libya stabilize its economy while meeting growing domestic energy demands. Unlike oil and gas with their price spikes and environmental regulations, solar-generated power provides a stable source of energy with stable associated costs. Further, an established CSP sector can contribute to the preventing fuel shortages, a scenario that may be more likely in a nation with growing energy demand and damaged hydrocarbon infrastructure. Finally, a new industry can provide what many young Libyans need the most: employment.

However, there are other factors to take into account. With Libya’s oil production almost back to pre-war levels, it makes sense for Libya to focus on hydrocarbon development, especially since oil profits have historically funded up to 90% of the state budget. Furthermore, the initial investment required for CSP plant construction may sometimes exceed the initial costs involved in oil exploration and production. Dr Franz Trieb, researcher at the German Institute of Technical Thermodynamics, explains that “the building of a solar plant, especially CSP as it provides the same power quality as an oil plant, involves the exploration of the solar energy resource and the generation of power on demand. That’s one of the reasons for comparatively high up-front investment.”

Typically, such high costs may force states to take out exorbitant loans to fund initial stages of solar power. This may be a burden too great for Libya to bear. However, it may be possible to split the cost of CSP development with returning oil firms. Should companies like Eni, BP and Shell be willing to do so, the construction of a new energy sector will progress with far greater speed. “Indeed,” agrees Dr. Trieb, “the lower the cost of capital, the more attractive solar power becomes. If you avoid paying interest rates you reduce the cost of solar power significantly. It is particularly important that the money goes into the equipment and not to the banks.”

Lower cost and faster progress would be a leading advantage of Libya creating a framework agreement with oil firms that makes green energy development a part of their collective commitment to rebuilding Libya’s energy portfolio. Once CSP is fully established alongside a fully functional oil and gas sector, it will be possible to free up more oil and gas for export, while still meeting Libya’s energy needs through a balance of CSP and conventional power sources.

Returning to the starting point of this article, the final stage in a successful Libyan energy diversification plan would be the sale of surplus electricity to Europe. Under ideal conditions, Libya may be able to export up to 12,000 Megawatts to European clients. Naturally, the main client for Libya would be Italy due to their proximity and historical ties. A power route from Tripoli to Sicily is perfectly feasible using High Voltage Direct Current sea cables. Such a power-sharing structure using underwater cables already exists between Norway and the Netherlands. Called NordNed, its underground cables stretch from Norway to the Netherlands at a distance of 580 km. The distance for cables running between Tripoli and Sicily would be 531. 21 km. Hence, it may be possible to import High Voltage Direct Current from Tripoli to Sicily. Once in Sicily, the current could then be processed into the more common (and lower voltage) AC/DC format, used by Italy and Europe.

If oil firms returning to Libya contribute to a structured, long-term establishment of solar power production alongside hydrocarbon sector recovery, Libya may be able to kill two birds with one stone. Their highest state-budget earner would return to, perhaps even exceed, pre-war levels, while solar power production would, in the medium to long term, free up more hydrocarbons for export. At the same time, such an arrangement would give Libya the chance to reduce their consumption dependence on finite sources. Further, longer-term prospects of solar power may allow Libya to take advantage of its European proximity and links to diversify its energy markets. According to experts, the technology is both established enough and affordable enough for solar energy to become a viable form of trade between the MENA region and Europe.

However, the potential for Libya must still be placed within the context of political stability and physical security. Furthermore, returning oil firms will have to contend with not only Libya’s fragile security situation, but a recent global drop in demand for Libya’s sweet crude. Hence, a demand for oil firms to invest in renewable energy development and its implementation in Libya may compound the other pressures returning companies are already contending with. Nonetheless, should Libya eventually go green, the decision may provide them with a long-term asset and product with predictable prices and financial certainty.