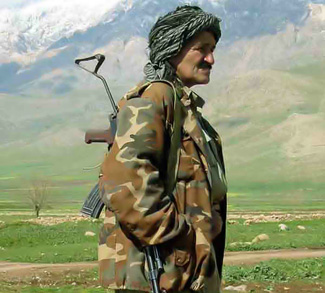 Turkey appears to be ready to deploy an army of 18,000 soldiers in Syria and occupy an area of 33 km between the Syrian cities of Kobane and Mari in an effort to contain Islamic state, which is trying to conquer the northern part of Syria. But the real target might be less IS and more the Kurdish forces, who are fighting and scoring victories against IS and political victories in Ankara while remaining Turkey’s principal preoccupation.

On June 28, Turkey’s Prime Minister Ahmet Davutoglu, representing President Recep Tayyip Erdogan’s same AKP party, said that Turkey “is ready for all options in the event of a threat to our security.” Erdogan, meanwhile, in an ambiguous statement that applies as much to IS as it does to the Kurds, said that “the international community should know that, whatever the cost, we will never allow the establishment of a new state in northern Syria long our southern border.” Erdogan is clearly threatening the Kurds from the Syrian Kurdish militias of the PYD (Democratic Union Party, Partiya Yekîtiya Demokrat in Kurdish), active in northern Syria, affiliates of the Kurdistan Workers Party (PKK), which have been at war with Ankara for the past 30 years. Indeed, thanks to help from the United States, and tacitly from members of the international coalition fighting IS in northern Syria and Iraq (including Canada), the PYD have inflicted the heaviest defeats upon IS forces. They now control two-thirds of the Syrian border with Turkey. Yet to Erdogan, “the PKK is like the Islamic state,” as he has once said. The PYD controls three enclaves in Syria: Afrin in the northwest, Kobane in the north-central region, and Jazeera in the northeast.

Trump to Sink Further into the Syria Quagmire?