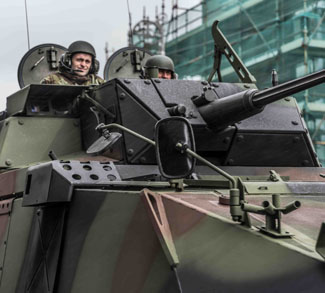 The European Defence Industry Summit (EDIS), allegedly the first of its kind on the continent to bring political leaders together with defence industry representatives, met for the first time in Brussels this week to discuss the geopolitical challenges and technological developments facing European countries. The summit also came just days after the publication of the most recent Strategic Foresight Analysis report from NATO, which publishes these documents every four years to support the trans-Atlantic alliance’s visualization of its future security environment. Many of the 20 global trends the report identified, such as cyber-security or rapid advances in technological development, were the subject of intense interest for speakers attending at the event.

NATO concerns about Russia. The most recent report from the trans-Atlantic alliance now sees a much higher risk of an inter-state war in the years ahead than it did four years ago, when the last such document was produced. But equally, it warns any attempt to improve European security by bolstering defence capabilities on the continent runs the risk of sparking a new Cold War-style arms race with a revanchist Russia.