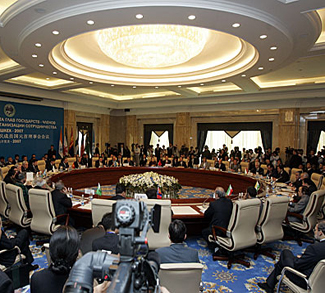 The Shanghai Cooperation Organization held its 14th annual summit from Sept. 11-12 in the Tajik capital Dushanbe, with the stated goals of expanding economic cooperation and containing threats of extremism among its members.

The organization includes Russia and China as well as four Central Asian republics: Kazakhstan, Kyrgyzstan, Tajikistan, and Uzbekistan. Isolationist Turkmenistan eschews international organizations but the Turkmen leader participated in discussions with China on the sidelines.

Prior summit meetings rarely elicited much international coverage, but Russia’s recent invasion of Ukraine has generated more interest in the security and economy-focused bloc. The bloc represents half of the world’s population, one BBC News analyst noted last week.