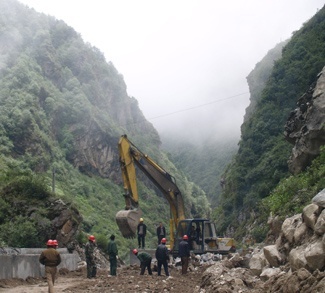 Among all the things that Indian Prime Minister Narendra Modi said and accomplished during his recently concluded tour of Nepal, the most catchy one was no doubt his “HIT” formula, meaning “highways, informationways, and transways” which met with eager acceptance among Nepalese lawmakers. From a diplomatic point of view, of all of these “ways” the most important is Narendra Modi’s concept of the “transways,” which in actual parlance means cooperation among India, China, and Nepal. China is not at all lukewarm to such a trilateral approach. However, it is to be watched whether Modi can get India’s security lobby over to his side and convince the bureaucracy, which is almost certain to oppose such an initiative.

Right at this moment it is a bit difficult to analyze why Narendra Modi made such a move because if any trilateral understanding among China, Nepal, and India materializes it is likely to further China’s interests, political as well as economic, rather than those of India. However, Modi has his own vision of a resurgent Asia and he wants to curb the influence of the West on Asian soil by way of a united political and economic initiative. It is certain that he would look towards the ASEAN countries in near future and has already set the ball rolling on improving relations with Japan.

So far as China-India-Nepal trilateral relations are concerned, political affinities might play a major part.  In Kathmandu, Nepali Congress now heads a coalition government. It has longstanding affinity with India and enjoys close relations with the Indian National Congress led by the Gandhi-Nehru dynasty. Many of its former leaders have taken shelter in India, first to escape the wrath of the Ranas and then that of the King during the time of the partyless panchayat. The Nepali Congress is not very enthusiastic about any trilateral approach. Interestingly, the man whose line of thinking Narendra Modi echoed in Kathmandu is none other than Pushpa Kamal Dahal, alias Prachanda, the top leader of the United Communist Party of Nepal (Maoist) who has twice advocated the case for a trilateral approach in recent past. In fact, an official level meeting between China, India, and Nepal was held in Kathmandu in January this year on this question, in which Nepal unambiguously expressed a desire to shrug off India’s tutelage and build new bridges with China.

The thrust of India’s foreign policy under Narendra Modi has been to regain the initiative New Delhi once enjoyed in its immediate and not-too-distant neighborhood. So far as its Nepal policy is concerned, Beijing’s principal interest is to safeguard the political, administrative, and ethnic control of mainland China over Tibet as large numbers of rebel Tibetans – followers of the Dalai Lama – now stay in Nepal and they often hold protests and demonstrations defying the government in Kathmandu. However, this threat perception on the part of Beijing is somewhat balanced by a general trend of anti-India sentiment among the elites and the common people of Nepal. During the time of the partyless panchayat system, the King of Nepal had exhibited a sustained anti-India and pro-China stance. In 1969, Kirti Nidhi Bisht, then prime minister of the country, demanded an immediate withdrawal of Indian wireless operators on charges of espionage. Almost every election in Nepal has witnessed campaigns by different political parties, save the Nepali Congress, on virulent anti-India lines. Even in 2010 an Indian envoy to Nepal was physically assaulted in Kathmandu.

It is not at all surprising that Narendra Modi would try to win over a country like Nepal, which is actually a buffer between India and China. He has made several commitments, including the announcement of a 1 billion dollar credit line for Nepal. This offer is important in the sense that, if enhanced to any significant extent later on, the credit may enable the Himalayan kingdom to lessen its reliance, if there is any, on multilateral aid organizations.

There is now widespread speculation in Indian corridors of power that Narendra Modi is trying to follow in the footsteps of Jawaharlal Nehru, and he is just yards short of emulating Nehru’s slogan of ‘Panchsheel’ and ‘ Hindi Chin Bhai Bhai’ ( China and India are two brothers). Only time will tell how far Modi can go, but this has already whetted China’s desire to exploit the Indian market for its cheap consumer products by establishing a Beijing-Lhasa-Nepal-India railway network, an aspect which will never be welcomed by the businessmen of Bihar and Uttar Pradesh, two Indian states which share borders with Nepal. In fact, the existing Nepal-India border is an open one and in recent past the business communities of Bihar and Uttar Pradesh have dourly opposed the establishment of more entry/exit points out of fear that cheap Chinese goods imported via Nepal will elbow out Indian products.

Snags are certain to appear in the case of a trilateral approach. India is Nepal’s largest trade partner but China is catching up very fast. In 2010-2011 Indo-Nepal bilateral trade was worth $4.21 billion, while the corresponding figure for Sino-Nepal trade was $1.2 billion. But with both the countries, Nepal has a negative balance of trade. Most Sino-Nepal trade is carried on through Tibet. In 2000, the volume of Nepal-Tibet trade amounted to just $235 million. But in 2011, the figure shot up to $945 million, which gives a fair idea of the rate of growth of Sino-Nepal trade.

The Trans-Himalayan Economic Growth Region, a Chinese brainchild on which Wee Wei, the Chinese ambassador to India, has recently laid great emphasis, has suddenly become vital for China’s security. It aims at sustained economic development not just of the remote western and northwestern corners of China, but of the former Soviet states of Central Asia as well. Beijing wants to counter growing Islamic fundamentalism in its Xinjiang province and the surrounding regions by creating a new engine of development, and in this it will need help from both Nepal and India.

In terms of aid politics India is way ahead of China, although that has posed no hindrance to Beijing in securing its strategic interests. Of all the ongoing infrastructure development projects in Nepal, 48 percent are Indian joint ventures while Chinese joint ventures amount to just 10 percent. But in regard to military aid, China has made its presence felt. This poses somewhat of a conundrum, and the answer might lie in in the psyche of a Nepalese ruling elite which cannot shake off its dependence on India completely, though it still harbors a desire to cut down New Delhi’s influence.

Much will depend on the how the ongoing fluid political situation in Nepal shapes up in the near future. Even after years of painful labor, the Constituent Assembly has not been able to finalize a new constitution. Moreover, an internal tussle is going on among the Maoists, whose importance cannot be denied in Nepalese politics. One faction led by Baburam Bhattarai is pitching for peace and constitution framing while another group led by Pushpa Kamal Dahal (Prachanda) has adopted a hardline posture. In this confused scenario, China has sometimes played inexplicable roles. Ideologically it is closer to the Maoists, but it supplied arms and ammunitions to the King in his fight against the Maoists some years back, when India, the United States and the United Kingdom refused to oblige the King at the time.

In India too Narendra Modi’s approach has generated skepticism, as the 1950 Indo-Nepal Treaty of Peace and Friendship confers extraordinary status to citizens of both the countries. Citizens of either country can take up employment and acquire properties in the other. This automatically brings Nepal under India’s sphere of influence. On the other hand, India spends almost 1300 crores of rupees annually to provide pensions to Nepalese citizens who served in the Indian Army. It has committed 650 crores of rupees for extension of two railway networks and it gives to Nepal 750 crores of rupees on an annual basis for flood relief and the maintenance of embankments.

So the picture is not clear yet. Any ‘transway’ as visualized by Narendra Modi or the Trans Himalayan Economic Growth Region conceptualized by the Chinese side may witness an increase in business and trade activities, or even an improvement in the security scenario. But to what extent it will be accepted by the various power blocs in India and China is anyone’s guess.

One response to “Modi’s China-India-Nepal Nexus: Trilateral Boom or Bust?”