Situation Reports - September 30, 2015
By Jonathan Wade of the Sentinel Group 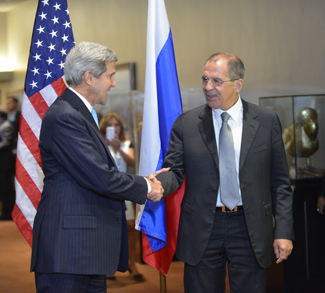 Russian Foreign Minister Sergey Lavrov has said that Russia and the United States have agreed to enhance their discussions on cooperation against the Islamic State. Through foreign and defense ministers, both nations will keep a dialogue open to reach common goals.

The cooperation could bring both countries closer as their relationship has been drastically harmed since the annexation of Crimea in March 2014. Though unlikely, the airstrikes in Syria could be a turning point in US-Russian relations, especially in the field of terrorism and counter-insurgency.

“Today’s meeting was very constructive, practical and surprisingly frank,” the Russian president told the press. “We found a lot of common ground, but there are differences as well. In fact they are known, so there is no need to repeat them.”

During the ninety minute meeting which was only expected to run fifty-five minutes, both leaders agreed they can work together on common problems. Prior to the meeting, a quick photo op, lasting less than fifteen seconds, exposed both leader’s dislike for the other. That said, they were still able to successfully meet with a positive outcome.

Although President Obama did not comment following the meeting, a US official confirmed there will be further talks on exploring options for a political solution in Syria. However, no agreement was reached on the future role of Syrian President Bashar al-Assad.

The dynamics of Russia’s military intervention in Syria

It was agreed that both the Pentagon and the Russian Defense Ministry will conduct military-to-military talks. Whilst Russia is ruling out Russian ground troops conducting operations for now, they have been clear that the air force may conduct airstrikes against Islamic State positions.

Last week, Russia and Israel agreed to “coordinate their efforts over Syria military actions. The coordination aims to prevent accidental clashes between Russian and Israeli troops.”

Twelve Russian Su-25 Frogfoot close air support aircraft are currently deployed at the Latakia air base, an Assad stronghold. The Su-25, the Russian version of the American A-10 Warthog, is capable of conducting tactical airstrikes against Islamic State militants.

The Russian Su-25 may very well support Assad’s troops during offensive operations to drive out ISIL militants from Syria. Su-25 have been designed for this purpose, but could also be dispatched to destroy ISIL entrenched positions and supply depots.

The probability of seeing Russian troops near the frontline acting as advisors to the Syrian troops is very high. The same principle is currently used by the Canadian Special Operations Forces Command alongside Kurdish partners.

Prior to this deployment, Russia still operated a naval facility in Tartus: “the only Mediterranean repair and replenishment spot for its navy, sparring Russian warships the trip back to their Black Sea bases through the Turkish Straits.”  The facility in Tartus could also be an alternative for aerial shipment of goods due to NATO and Ukraine’s decision to close its airspace to Russian military aircraft.

“We do not rule out anything. But if we do something, we will do it in full accordance with the norms of international law, “Putin said, answering the question as to whether the Russian military is planning to conduct anti-ISIS airstrikes in Syria. “We talked about this today: Military jets from Australia, France, the U.S., are carrying out airstrikes not only in Iraq – where it is justified under international law, since there had been a request from the Iraqi government – in the case of Syrian territory it is illegal, and we spoke about it too.”

Although the United States did not seek Syria’s approval to conduct the airstrikes, they did notify the Syrian UN representative about their intentions. As of today, countries such as the United States, Canada, United Kingdom, France and Australia are conducting strikes in Syria. Turkey, a member of the US coalition, also gave permission to the United States Air Force to launch airstrikes from the USAF Incirlik air base in Turkey.

What Russia stands to gain by supporting Assad

Russia definitely gains from supporting Syria’s al-Assad regime. With the Syrian military losing ground and equipment, Russian defense industries could very well gain many lucrative contracts to modernize and reequip the Syrian armed forces. Russia has been Syria’s main weapon supplier. Through Rosoboronexport, Russia has the ability to sell billions worth of military equipment to Syria.

What Russia also gains by supporting Assad is the naval facility in Tartus. Although it cannot accommodate warships longer than 100 meters, Russia could modernize the facility and deploy ships from the Black Sea Fleet during drills in the Mediterranean.

The fact that Russian ships sail through Turkey to reach the Mediterranean is another reason why Tartus may become a strong geopolitical location to launch warships without sailing through a NATO country. While Turkey is a NATO country, Russia still has unlimited access to the Mediterranean because of the Montreux Convention signed in 1938.

Since Russia and Egypt have enhanced military cooperation, the Tartus naval facility could also become a strategic staging point for both navies. The Egyptian Navy’s port of Alexandria, Port Said, and Marsa Matruh have direct access to the Mediterranean, enabling its navy to conduct routine drills with its Russian counterpart.

The possible cooperation between Russia and the United States against ISIL could become a real nightmare for the Islamic State. However, it is very likely that both countries won’t reach a decent deal due to their completely different position on Bashar al-Assad.

That said, when Russia—because they will—starts conducting airstrikes, militants from the Islamic State will feel pressure from both sides.  As for the United States, airstrikes will continue regardless of the outcome of the possible cooperation.

Russia and the United Stated will have no choice but to respect each others decision since their aircraft might be flying in the same area of operations.

Turkey Shoots Down a Russian Su-24 over Syria 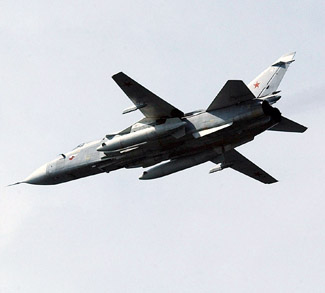