Civil War Looms ahead of US Withdrawal from Afghanistan

Situation Reports - May 18, 2021
By Geopolitical Monitor

On May 8, teenage schoolgirls were bombed in a Hazara neighborhood of Kabul, resulting in over 80 deaths and 150 injuries. One week later, another bomb killed 12 worshippers and the imam at a mosque in Kabul, in defiance of a three-day ceasefire for the Eid al-Fitr holiday. These are just the high-profile attacks. All-too-often overlooked by global headlines is the growing number of assassinated public servants, civil society activists, and journalists, particularly women, that together portend a grim future for Afghanistan’s fragile political order.

To say Afghanistan is devolving into civil war ahead of the scheduled US pullout date of September 11 would be inaccurate; the country has already been engaged in a slow burn civil war for decades now. But mounting signs point to a significant escalation in the near future.

Despite hundreds of billions spent in aid, nearly two decades of military and police training, and an extended military commitment from NATO, the government of Afghanistan still inhabits a precarious strategic position: most of the countryside is in Taliban hands, Islamic State is fanning the flames of division with a campaign of sectarian slaughter, and Kabul’s foreign backers are now rushing for the exits after nearly 20 years of war.

It’s hard to imagine a scenario where the upcoming US pullout doesn’t usher in a new phase of open conflict in Afghanistan. In the worst-case scenario, we could see a repeat of the bloody civil war that ultimately brought the Taliban to power after the Soviet pullout of 1989.

The February 2020 peace deal agreed between the Taliban and the Trump administration altered the dynamic of US-Taliban conflict. In it, the Taliban pledged to not target US troops and Afghan urban centers, and in exchange, the US scaled back air operations against Taliban targets.

Yet once the US pullout is completed later this year, the Taliban will once again have a free hand to resume large-scale attacks on Afghan cities (the militant group has been literally encircling them in the meantime). Kabul won’t command the air power needed to forestall such operations, as the Afghan Air Force remains highly dependent on US advisors and contractors to maintain its equipment and train new pilots. Reduced air capacity also impedes the government’s ability to maintain forward bases in remote parts of the country, where poor infrastructure and Taliban control of vital transport nodes necessitates the use of air transports to ferry in supplies and personnel. Moreover, despite assurances from US military figures that the United States will retain a capacity for launching airstrikes within Afghanistan post-pullout, the fact remains that the closest major US airbases are located in the Gulf. Unless new basing rights are secured in neighboring countries like Uzbekistan, Turkmenistan, Pakistan, Tajikistan, and/or Kyrgyzstan, US drones and fighters will either have to risk traversing Iranian airspace or take a circuitous route via Pakistan, both of which reduce response times and operating duration before refueling is necessary.

With the US Air Force pulling out and the Afghan Air Force not able to fill the vacuum, Afghan cities will no longer enjoy the protective umbrella they have depended on since the war started, opening the door to large-scale operations by Taliban fighters.

Washington has spent over $144 billion on development assistance to Afghanistan through the end of 2020, billions of which has gone toward capital assets that are currently unused or abandoned. This staggering sum is in addition to the bilateral aid extended from other countries in the neighborhood (India, for example has committed $3 billion to Afghan development projects), NATO countries (Canada has provided $3.6 billion since 2001), international institutions like OECD and the World Bank, and civil society organizations. Yet decades of profligate aid spending have failed to translate into fiscal self-sufficiency for Kabul. Quite the contrary, Afghanistan remains one of the most aid-dependent countries in the world. By one estimate, donor grants accounted for as much as 80% of public expenditures in 2018, and efforts to increase Kabul’s revenue generation capacity – already moribund going into 2020 – continue to be thwarted by COVID-related economic fallout and the deteriorating security environment ahead of the looming US withdrawal.

All things being equal, this wouldn’t represent an existential crisis for the Afghan government. However, donors are starting to tighten their purse strings amid mounting questions of the long-term viability of the Afghan state. Foreign donors pledged $12 billion in aid during the most recent development conference in November 2020, down from the $15.2 billion pledged four years previously. Even more alarming for Afghan policymakers though is the conditionality of much of the aid on offer, tied as it is to various metrics such as maintaining human rights or progress in the top-level peace process. Simply put, this latest round of pledges is less ironclad than previous examples, and one anticipates that there will be ample opportunity for donors to withhold their pledges given the turmoil to come. The resulting budget shortfalls can strike at the heart of the Afghan state’s legitimacy by threatening its ability to pay wages in vital sectors such as health, education, and ultimately policing and the military as well.

Lacking in a credible peace plan

The February 2020 agreement, reached directly between the United States and the Taliban, only involved a pledge on the part of the latter to negotiate with the authorities in Kabul. There was no roadmap for what the politics of post-NATO Afghanistan might look like and no specific pledges from the Taliban, only a vague promise to give peace a chance. Unsurprisingly, little progress has been made since then, such that even a three-day ceasefire to mark the end of Ramadan seems beyond the capacity for the two sides to deliver.

Now just months away from the final pullout date, the US is desperately trying to kick-start talks between Kabul and the Taliban, so much so that it allowed itself to take a diplomatic black eye last month when the Taliban no-showed to a US-sponsored peace conference in Turkey.

Again, none of this is surprising.

The Taliban inhabits an extremely favorable position vis-à-vis Kabul: it controls the vast swathes of the countryside, has proven itself combat effective even when the Afghan Armed Forces enjoyed direct NATO ground and air support, and most importantly it has been forced to give up nothing at the negotiating table in order to secure its long-held objective of a NATO withdrawal. Furthermore, the militant group’s leverage will only increase in the post-NATO strategic context (for the security and economic reasons outlined above), meaning there’s zero incentive for it to make any political concessions at the moment. So while the odd encouraging sign of respecting democracy or women’s rights may percolate down from the Taliban leadership and into the headlines every once and a while, these commitments remain vague and ripe for abandonment the moment that NATO finally clears itself from the Afghan chessboard once and for all. 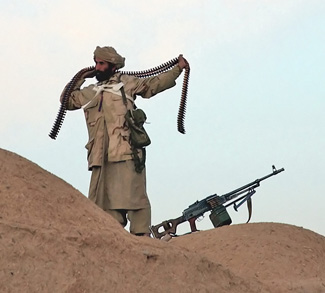