Who Is Behind the Bangkok Bombing? 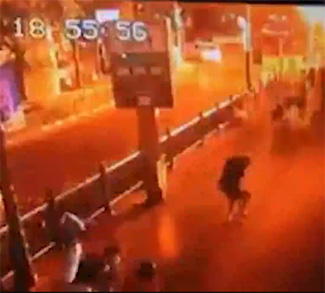 A bomb exploded near Bangkok’s Erawan Shrine at 7:00 p.m. local time Monday night, killing 21 people and injuring over 100 others. According to Thai national police chief Somyot Poompanmoung, the device was a pipe bomb placed inside the shrine itself. It was detonated at a time when the shrine could be expected to be packed with visitors.

Two other bombs were found in the area and defused by Thai bomb-disposal units.

There are several theories as to who is behind the Bangkok bombing. First is a militant group from the insurgency in Thailand’s Southern Border Provinces. The conflict over greater autonomy for Thailand’s southern, ethnically-Malay and predominantly Muslim population has been raging for over a decade now, claiming over 6,000 lives. It is being fought by a loose coalition of militant groups that include the National Revolutionary Front (BRN) and the Pattani United Liberation Organization (PLO).

Though fighting continues in the south, with two Thai soldiers being killed in a drive-by shooting as recent as July 17, southern insurgents seem to have been ruled out for Monday’s bombing by the Thai army chiefs. There are two reasons for this: one the “tactics don’t match up,” and two the type of bomb isn’t in keeping with the kind used in southern attacks.