Though 2020 will be defined in the history books by the COVID-19 pandemic, a story that ought to not go unnoticed is the ascendance of Turkey as a ‘drone superpower.’ This rise was by no means peaceful and comes as a result of various confrontations between Russian and Turkish proxies in the Near East. Initially, the Turkish Bayraktar TB2 unmanned aerial vehicle (UAV) struck at Russian-backed forces in the Libyan and Syrian civil wars. However, the successful usage of the Bayraktar TB2 UAV by Azeri forces in the Second Nagorno-Karabakh War demonstrates a paradigm shift for the Russians whereby Turkey is competing with them in what is called the ‘near abroad.’ According to Russian foreign policy thinkers, the ‘near abroad’ is comprised of all the post-Soviet states and is Russia’s ‘sphere of influence.’ Turkey’s ability to influence the affairs of Armenia and Azerbaijan, both post-Soviet states, brings into question Russia’s influence in the post-Soviet space.

The Turkish Bayraktar TB2 UAV was developed by Turkish defense firm Baykar. It can fly at 22,500 feet and can remain aloft for over 24 hours. From this height, it can conduct reconnaissance as well as laser-guided missile strikes. The sophisticated system can mean the difference when fighting against adversaries lacking robust indigenous anti-air capabilities, such as the Russian-backed Libyan National Army (LNA). Unfortunately for the Russians, in both the Libyan and Syrian civil war, its most touted air defense system, the Pantsir S-1, proved unable to counter in the Turkish UAVs. The Pantsir S-1 system was supposed to be a trump card to shoot down the Turkish UAVs. However, the opposite happened, and an estimated 23 Pantsir systems were lost in the Syrian and Libyan civil wars to the very Turkish drones they were supposed to defend against. The inability of the Pantsir S-1 systems to counter Turkey’s UAVs have forced the Russians to patch the Pantsir systems in a bid to restore the system’s tarnished reputation.

The success of the Turkish UAVs extends beyond proxy wars; it includes conventional wars as well. The Second Nagorno Karabakh War displayed Turkey’s sway as a ‘drone superpower’ as its Azeri allies utilized the Bayraktar TB2 UAV to find, fix, track, and strike the Armenians behind the front lines. The Armenians deployed foreign drones as well: the Russian Orlan-10 UAV. However, the Orlan-10 could not defeat the Bayraktar TB2 UAV and Turkey effectively concluded one of the ‘frozen conflicts’ of the former Soviet Union through the simple export of a fleet of drones.

With one post-Soviet conflict concluded with Turkey’s help, the question has been raised if Ukraine could end it’s frozen conflict with Turkish drones. Though Ukraine bought 12 Bayraktar TB2 UAVs in 2019, defense relations between Turkey and Ukraine have deepened in 2021, and the Ukrainian Chief of the General Staff has indicated his desire to purchase more of these UAVs. This development is bad news for the Russians, given that Russia is engaged with Turkey on two fronts critical to Ankara’s national interest. Turkey is in a prime position to leverage its defense relations with Ukraine against Russia in its ‘near abroad’ as Kiev aims to end its wars.

For Russian foreign policy, 2020 was defined by confrontations with a Turkey eager to flex its muscles as a regional power. The common thread in all the confrontations from Libya to Nagorno-Karabakh was the Bayraktar TB2 UAV. Now that Ukraine has deepened its interest in Turkish UAVs, the trend shows no signs of stopping. For Turkey to achieve its geostrategic objectives, it must deal with Russian designs in Libya and Syria in some fashion. For the time being, the export and usage of Bayraktar TB2 UAVs is an exercise in hard and soft power that does just that. Soft power in that the export of these drones is deepening defense relations with states in the post-Soviet space and hard power demonstrated by the usage of these UAVs to strike Russia-backed targets in conflict zones, hurting Russia’s efforts at power projection.

Putin Plays his Hand in Venezuela 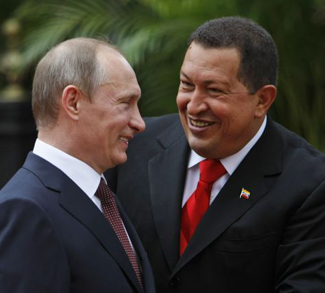