The Shine Starts to Come Off President Macron 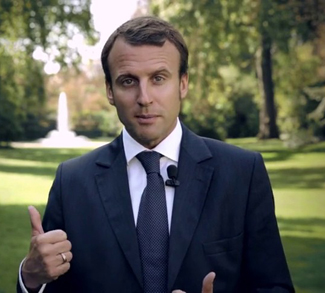 Emmanuel Macron’s victory in French presidential elections earlier this year came as quite a shock to some. At just 39 years old, Macron rocketed from political obscurity to the highest office in the land, and in the process swept away Marine Le Pen’s resurgent National Front (FN). His victory also took on symbolic significance for EU supporters across the Continent, many of whom saw it as reversing the recent tide of right-wing, anti-EU populism.

Now it appears the young president’s honeymoon period with the electorate was brief, as Macron’s popularity rating is dropping quickly. According to a YouGov poll published on August 3, the president now has just 36% of voters behind him, a full 7% less than the previous month. The reversal reflects two realities of French politics: the immense difficulty of implementing labor reform in France, and the fact that Macron was never terribly popular to begin with.

Looking back at the French election. The presidential election of April/May 2017 was a remarkable one. On the surface, there were all of the usual issues looming over the contest: unemployment, languid growth, questions of the military’s role/legacy, immigration, and profligate government spending. But the candidates – speak nothing of how the voters responded to them – were anything but business as usual. On the far right there was the hope and dread represented by a Marine Le Pen, who seemed to be at the knocking at the door of the political mainstream for the first time in FN history. The previous consensus candidate in Francois Fillon had suffered a crippling scandal, yet refused to bow out. The sitting president in Francois Hollande had made the unprecedented decision not to run due to his own toxic political brand. And the left had split into the ruins of Hollande’s centrist politics and the far left vein of Jean-Luc Melenchon.

In the middle of all this was relative newcomer Emmanuel Macron with his En Marche party. He was ready and willing to benefit from this perfect political storm where, for many voters, he was the best of bad choices. The first round clearly reflects this: Macron took just 24% to Le Pen’s 21.3%, with Fillon and Melenchon close behind with 20% and 19.58% respectively. After a very tight race in the first round, the margin expanded in the second with Macron taking 60.93% to Le Pen’s 39%. Yet this is less a vote of confidence in Macron, and more of the usual cross-partisan fear in a National Front presidency. Similarly in legislative elections, Macron’s party was handed an absolute majority, but one where most opposition supporters didn’t even bother to vote. The election had record-low turnout at 56%.

None of this is to take away from Macron’s impressive victory. Rather, it is meant to point out a key consideration: Macron’s political capital appears more abundant than it actually is. And this is important given the legislative priorities that the young president has set out for himself. There are going to be a lot of losers in labor reform, and a popular revolt against the president and his party could derail the attempt before it even gets started.

Macron vs. the labor code. France’s reputation as a bureaucratic nightmare for employers stems from its extensive and authoritative labor code. The code has been around since the French Revolution. It regulates health and personnel decisions down to the tiniest detail, and often in language that only the most grizzled legal experts can hope to understand. Enforcing it is a system of courts with a reputation for siding with labor’s interests.

A central plank of Macron’s policy is to streamline hiring and firing in France. In this, the labor code is a serious impediment. The code tells companies under what circumstances they can fire an employee, and how much that employee is entitled to receive in compensation. It also effectively restricts the growth of companies by linking an employers’ compensation and benefit burden to the size of their workforce, thus de-incentivizing expansion.

Labor code reforms are obviously a contentious issue for France’s unions – just ask former president Francois Hollande. Macron has acknowledged this by commencing negotiations with various unions soon after his election win. The president has given himself until September to enact the first round of reforms. He also has somewhat of a ‘nuclear option’ should negotiations with the unions fail. He could simply enact the reforms via executive ordinance now that parliament has given him the authorization to do so.

Macron’s personal popularity is a key consideration ahead of his September deadline. It essentially affects the negotiating leverage of the union representatives. If they’re able to cut a deal, then both sides get what they want: a controlled easing of labor restrictions and the optics of a cooperative labor movement. (Macron is pushing to shift hiring and firing regulations away from the labor code and to companies themselves). However, if the two sides are not able to cut a deal, we’ll see large-scale protests after the summer break is over in September.

A rift opens up between Macron and the military. One of the paradoxes of Macron’s platform was his promise to reduce the deficit while bringing France’s military spending back to the NATO-mandated 2% of GDP. Early on, it would appear that the former won out over the latter. In an effort to rein in the government’s finances, Macron is pushing a surprise 850 million euro cut to the military. Macron has publically clashed with French General Pierre de Villiers in past weeks, resulting in this popular chief of France’s armed forces stepping down.

The cut comes at a time when the French military is very active at home and overseas. There are over 30,000 French troops deployed worldwide in counter-terrorism operations, including in the Sahel, Iraq, and Syria. There are also 13,000 troops active within France to protect against terrorist attacks.

President Macron still maintains that he will reach his originally promised goal of 2% GDP military funding by 2025.

Open clashes between the Macron administration, labor, and now the military, have combined with a nepotism scandal to impact the president’s approval ratings. Should Macron’s ratings continue to drop, his effort to reform the labor code will be impacted by watering down his proposed reforms or causing Labor to try its luck in widespread street actions. Either way, September will be an interesting month for French politics.