The MENA Revolutions: Then and Now 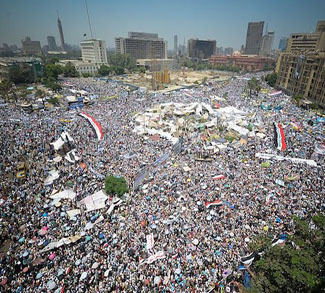 When spontaneous uprisings broke out in the Middle East and North Africa (MENA) in 2011, they seemed destined to usher in a new era of freedom, economic prosperity, and democracy in the region. These protests came to be known in the Western media as the ‘Arab Spring’ – an apparent misnomer since the movement was neither exclusively ‘Arab’ in character nor simple enough to serve as an analogy of the European ‘Springs’ of 1848, 1968 and 1989.

Over two and a half years later, these uprisings and revolutions are still threatening to transform the political and social dynamics of several states; though not necessarily in the way that was originally intended by the generation of tech-savvy youth who launched them.

This inevitably begs the question: What went wrong?

It all began in Tunisia, the birthplace of the movement, where a young Mohamed Bouazizi set himself ablaze after his fruit cart was confiscated by local Tunisian officials. His mistreatment and subsequent self-immolation on December 17, 2010 triggered a series of spontaneous protests in Tunisia that quickly spread to the rest of the Arab world. In reality, while Bouazizi’s inadvertent spark of the Arab protest movement was invaluable to the changes in the region today, social tensions between state and citizen had simmered on the surface of many Arab states for years, waiting for an opportune time to erupt.

Tunisia remains the most promising catalyst for democratic change in the Arab world. After all, the country prides itself on pioneering the wave of Arab uprisings that sprung up at the end of 2010 – uprisings that uprooted the old authoritarian order of Zine al-Abidine Ben Ali. Tunisia has thus been perceived in the West as a potential liberal-democratic model that other Arab states might follow. Although the Islamist Ennahda party garnered the most votes in the 2011 Constituent Assembly elections (37 percent vs. only 8 percent for the runner-up Al-Mottamar party gaining), it was forced to form a coalition with opposition parties to govern the country. Moreover, it pledged to retain Tunisia’s secular tradition by not making Sharia the principal source of law in the new constitution.

The assassination of Chokri Belaid, a leftist opposition leader and outspoken critic of religious radicalism, dealt a major blow to Tunisia’s democratic experiment. Divisions between Islamists and secular liberals multiplied following the incident. Consequently, the prime minister announced the replacement of his Islamist-led coalition by an interim cabinet composed of technocrats who will rule Tunisia until the next election (scheduled for late 2013). Today, democracy in Tunisia remains fragile. Poor economic conditions, the main spark of the Tunisian Revolution, continue to plague the country’s development. Moreover, internal struggles between ultra-conservative Salafists, moderate Islamists, and secular liberals continue to complicate the process.