It seems that Afghan and NATO authorities are once more seeking a dialogue with the Taliban- even after last year’s debacle of being fooled by a ‘very clever’ Pakistani shopkeeper pretending to be a Taliban official. Though the situation on the ground has changed, the question remains the same: does the Taliban have anything to gain from entering into talks?

More so than usual, the process by which the United States extricates itself from Afghanistan over the next five years must be viewed through the lens of domestic politics. Even the fact that we are finally receiving American confirmation from soon-to-be-gone Defense Secretary Robert Gates is illustrative of this point. He is one of the few members of the Obama administration who commands enough bipartisan respect to make such an announcement. In other words, he will be the first of many government officials embarking on the unenviable mission of convincing the American public that yesterday’s nemesis is today’s necessary evil.

There are three main reasons for the preponderance of domestic politics in the Afghan endgame: widespread war-wariness in NATO countries, creeping financial constraints in the US, and the successful assassination of Osama Bin Laden; one of the original goals of the war. Moving forward, Washington will have to strike a delicate balance between what are sure to be increasingly shrill calls for a pull out with some kind of face-saving endgame strategic landscape. A negotiated settlement that integrates the Taliban into the Afghan political process would strike such a balance, which is why it’s no surprise that the American administration is actively seeking to engage the Taliban.

But will the Taliban spurn these advances? While the NATO rationale for talks is clear, for the Taliban it is a lot more turbid. The Taliban leadership is keenly aware of the domestic political demands weighing down on NATO countries, and though it has been beaten back in the ground war of late, the movement remains resilient and its ability to launch attacks undiminished. If anything, attacks are becoming more sophisticated, such as a recent incident involving a uniformed Taliban infiltrator who managed to kill General Mahammad Daud Daud, a former commander in the Northern Alliance.

Ultimately the Taliban don’t have much to gain from peace talks, especially if they’re under the impression that all they need to do is wait a big longer for major NATO troop reductions to begin. The Afghan government has proven itself too corrupt to produce the kind of substantive economic development that could make fighters lay down their weapons and take up ploughshares, unless of course they were meaning to till poppies. Kabul’s reconciliation programs have so far erred on the side of total failure, and the few Taliban commanders who have crossed over into the fold have found that the government doesn’t follow-up on whatever it promised to give them.

Talk of peace negotiations with the Taliban should be taken with a grain of salt, and not just because of last year’s impostor debacle. Unless the Taliban feel that their best move is uniting with the Afghan government, they won’t come to the table in good faith. At the very least, they would need to believe that NATO forces could stay for as long as it took, and that that the Afghan government wasn’t a corrupt and somewhat colonial institution. Thus all the speculation that the Taliban have dropped their prerequisite of a NATO withdrawal and are ready to enter peace talks should be treated as such- merely speculation. 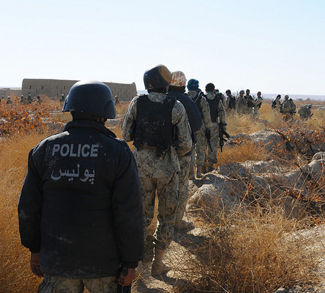