River Erosion along the India–Bangladesh Border: A Source of Violent Conflict 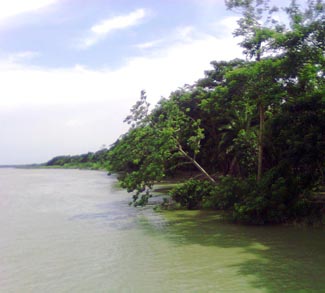 River erosion along the border often triggers violent conflicts between India and Bangladesh. These two countries share an international border of about 4098 km, 180km of which runs through the middle of shared rivers. When these rivers erode their banks on one side, sediments are deposited slowly onto the other, causing new land to build up. Both countries will then engage in military action in order to take over the new land.

Bangladesh, being the lower riparian state, faces a greater bank erosion risk on its side. The construction of various protective works on the bank of rivers on the Indian side drives the river wave to Bangladesh and causes river erosion. Therefore, Bangladesh loses its geographical territory to India in most cases. According to government accounts, Bangladesh has already lost more than 15,000 hectares of land due to such erosion, the result of 10 common rivers with India, as well as one with Myanmar. On the other side, the state of Assam in India has been worst hit with massive erosion by two major trans-boundary rivers – the Brahmaputra and the Barak near the Bangladesh border. This has resulted in not only territorial loss, but the destruction of housing, crops and arable land as well.

The serious threat of river bank erosion is that it gradually changes the river boundary which separates India and Bangladesh. Although the two countries share 54 trans-boundary rivers, border guidelines have only been framed for the boundary status of the Muhuri and Fenny rivers. Article 1 (5) of the 1974 Indo-Bangladesh Land Boundary Agreement states, “The boundary in this area should be demarcated along the mid-stream of the course of Muhuri River at the time of demarcation. This boundary will be a fixed boundary. The two governments should raise embankments on their respective sides with a view to stabilizing the river in its present course.” The same rule has been followed to set the boundary of Fenny River. For other common rivers, both countries treat the middle of a river as a borderline in the spirit of aforementioned 1974 Land Boundary Agreement.

However, the agreement neglects to touch down on whether natural changes in the course of these rivers should affect the location of the boundary between two states. In the absence of such a provision, the border guidelines are misinterpreted by both sides that if river changes its course due to erosion or flood, then the mid-stream boundary line will also shift. Thus, a river eroding its banks on the Bangladesh side adds new alluvial land (locally known as char) to adjacent Indian territory and leads to disputes when civilians living on both sides claim this char land as their own. This type of dispute has been prevalent in 17 common rivers at the very least.

Disputes over shifting rivers and ownership of newly accreted land often spark violent armed conflicts between the Bangladesh Border Guard (BGB) and the Indian Border Security Force (BSF). For example, in the Sylhet-Assam border areas alone, the two frontier troops have confronted each other 77 times over the last 37 years to grab the new patches of landmass that have emerged from the Barak-Surma-Kushiara, clashes which resulted in the loss of more than 55 lives. It should be pointed out here that the border areas of India and Bangladesh are heavily populated and extremely poor. The livelihoods of people in these areas are inextricably linked to agriculture. So when new land materializes from a shift in the course of river, people on the both sides move in under cover of their border troops to occupy and cultivate it. The famous Belonia border conflict started when Indian farmers, under the protection of the BSF, attempted to harvest crops on nearly 50 acres of newly surfaced land on the river Muhuri on the Belonia sector, a border area between eastern Bangladesh and the northwestern Indian state of Tripura.

Fighting also breaks out on the border if any side makes attempts at embankment protection against erosion. Each side accuses the other of building various defensive structures include groins, spurs, weirs, and sluices along the banks of common rivers, which in turn leads to accelerated erosion, and therefore, loss of territory. Both sides claim their own erosion control measures are temporary while accusing the other of erecting permanent embankments.

In fact, conflicts over alluvial riverine islands and raising embankments have strained India-Bangladesh relations for decades. A surplus of suspicion and mistrust between two countries has made these conflicts very complex. As a result, livelihoods in the border areas of both sides are becoming increasingly vulnerable, uncertain and insecure. Many of the past border skirmishes have ultimately led to the deaths of innocent civilians.

In recent years, the issue of bank erosion was highlighted in several India-Bangladesh minister level meetings that ended without any positive outcome. The path to prevention of these border conflicts lies in the amendment of the 1974 Land Boundary Agreement in order to insert a provision that in any case of erosion and deposit (natural or artificial), the river boundaries of the two countries remains the fixed. This type of agreement settled the boundary dispute of Bangladesh with Myanmar over Naf River in 1966. There is also need to transform the India-Bangladesh animosity, distrust and suspicion that have grown up over the years into a new relationship that is based on mutual trust and cooperation. It is hoped that such approaches will allow people on both sides of the international river border to live in peace and prosperity.

Canada and the Global Water Crisis: A GPM Interview