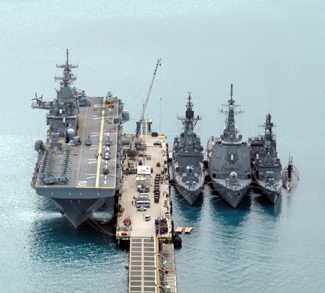 Belligerent and provocative behavior by China’s People’s Liberation Army Navy (PLAN) and the construction of bases on reefs threaten the open sea lanes that the Japanese economy depends on. In response, Tokyo has been looking to expand the scope of its Maritime Self-Defense Force activities in order to secure its interests beyond its immediate shoreline by creating new defense agreements with Southeast Asian nations, whilst simultaneously augmenting its Maritime and Air Self-Defense Force capabilities.

For now and for the foreseeable future, Japan and China are locked in a regional great power competition that is fuelled by historical legacies and escalating quickly.

Since the onset of the Cold War, Japan has adopted a self-subordinated role to US security interests. Over the past few decades since the end of the Cold War Japan has been orientating itself to be more self-reliant and less dependent on United States for its defense. Now, Japan’s Maritime and Air Self-Defense Force boasts a very impressive force that is orientated towards blunting and denying Chinese naval and air activities in the South China Sea. JMSDF and ASDF platforms are intended to raise the risk for Chinese naval incursions into the South China Sea, at least those which are deemed encroaching on territorial waters of other nations in the region.

Recent JMSDF maritime procurements, such as the Izumo class vessels and upgrades to the MSDF’s Aegis destroyers are incremental and signify a continuation of Japanese anti-submarine warfare efforts and anti-ballistic missile defense, respectively. These procurements are in line with Japan playing the ‘shield’ to America’s ‘spear’ that provides power-projection and offensive capabilities, such as aircraft carriers as well as (supposedly) a nuclear umbrella. Nevertheless, at the behest of Washington, Japan has taken on more security responsibilities in its region, highlighting a more autonomous role, and it is in a position to defend itself and others unilaterally against potential Chinese conventional incursions in nearby waters.

Provocative behavior by the PLAN and unreasonable territorial claims in the South China Sea have led to new security responsibilities in the form of bilateral defense agreements between Japan and Vietnam, Malaysia, Indonesia, and the Philippines in order to balance and counter Chinese aggression. These countries perceive Japan as a viable partner to secure their national security interests and a hedge against a possible over reliance on Washington. For Japan, agreements with these countries are intended to diversify its national defense apparatus and balance against China. For instance, in June this year, Japan secured basing rights with the Philippines, which will allow Japanese Self-Defense Forces to refuel ships and aircraft and allow troops to be rotated through. This is a monumental step for Japan because it is the second time since the end of World War II that Japan has struck an agreement with a second party to be allow basing rights abroad.

In March this year Japan and Indonesia signed a defense agreement expanding security ties on military training and technology. In April, Japan conducted naval exercises with Vietnam, which is part of a growing security relationship between Tokyo and Hanoi. In May, Japan and Malaysia signed an agreement covering defense technology and equipment transfers. These agreements and activities are in line with Prime Minister Shinzo Abe’s attempt to revive Japan’s military standing in order to secure its national interests in the region in the face of perceived Chinese belligerence. More importantly, it highlights the shared understanding these nations have and that they are willing to respond positively to Japanese security guarantees and disregard Japan’s imperial legacy, which has often shaped relations.

Shinzo Abe’s decision to join the F-35 program is another step to respond to China, but also earmarks Japan’s national security interests to be involved in multilateral military innovation, whereas previously it has depended on bilateral military innovation agreements mainly with Washington. Given Japan’s declining population, it will need to be a qualitative force dependent on innovation at the high-spectrum level – their BMD and anti-submarine warfare capabilities are exemplars. Whilst the F-35 program is a few years off at this stage, it will challenge China’s naval incursions nonetheless.

What are the ramifications?

Whilst Japan has no territorial claims to the South China Sea, it does perceive Chinese activities as a catalyst for further provocative behavior, especially over their own territorial disputes involving the Senkaku/Diaoyu islands. For China, Beijing perceives Japan through a historical lens in order to justify their response to what is regarded as an attempt by Japan to restore its militarism. Therefore, South China Sea disputes are likely to create spillover effects and displease Beijing. In response, Beijing will attempt to shift Japan’s energy away from the South China Sea and towards the Senkaku/Diaoyu island dispute to isolate Tokyo. This will challenge and stretch Japan’s MSDF capabilities because of the need to operate in two theatres, which will mean that Tokyo will need to continue to strengthen its diplomatic ties with Southeast Asian nations to offset Beijing.

Whilst Japan augments its military hardware, it is important to contextualize these advancements within new defense agreements made with Southeast Asian nations. There might be an expectation that Japan’s new partners will want to see Japan’s MSDF vessels patrolling their waters to give a message to Beijing. In the end, Tokyo is finding itself in new waters, which will test Japan’s notion of collective self-defense.

Note to the Next US President: US-ASEAN Cooperation Must Endure 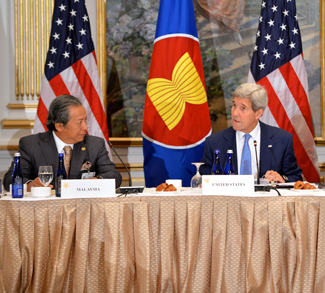