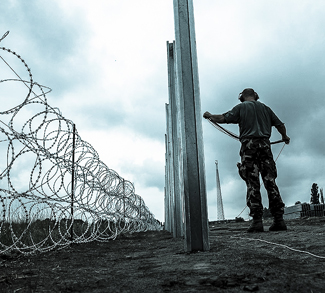 In what French President François Hollande called an “act of war” by ISIS militants, the Paris attacks saw France declare a state of emergency across the country and close its borders. The decision to secure France’s borders was based on the rationale that any perpetrators of the attacks still at large would not be able to leave the country. Border security is also expected to play a role in preventing terrorists from entering a country.

The decision to close France’s borders is one that is incredibly challenging to implement. France shares a 1,274-mile long border with six countries to the east and a 436-mile long border with Spain and Andorra to the south. Its long coastline also poses a problem for border security. France is also part of the European Union’s (EU) Schengen zone – the product of an agreement that abolished the EU’s internal borders rendering border crossings and checkpoints across much of the bloc obsolete.

The events of the Paris attacks heighten tension about the role of borders in the modern EU. Germany’s Interior Minister, Thomas de Maiziere, asked Europeans not to link it to the ongoing migrant crisis. The next day, the Greek government announced that two men linked to the attacks registered as migrants in Greece and one of them “entered Europe [via Leros] while masquerading as a refugee just six weeks ago.”

While one of the gunmen was identified as a Frenchman, Belgian authorities have made several arrests related to the Paris attacks. These are precisely the factors that reinforce the idea that borders, particularly border closure, while playing an important role in national security, divert authorities’ attention from the real factors that facilitated such a highly-coordinated series of attacks in the heart of the French capital. A major obstacle is that one case cannot easily link terrorism with migration and consequently impact policy. This does not imply, however, that more cases need to arise before changes are made to the EU’s counterterrorism policy solely on the basis of migration.

Frontex’s 2015 risk assessment has only recently shown that human smuggling can serve as a channel for terrorist operatives into Europe where they can move freely throughout the Schengen area.

Following an extraordinary European Council meeting held on September 21, 2001, approval was reached on a comprehensive policy to combat terrorism. In addition to the five areas in which new instruments and measures were to be implemented, all EU member states became bound to a single long-term counterterrorism strategy. Shortly after ISIS militants carried out the Paris attacks, ISIS announced that it was just the “first of the storm” and that France would continue to be one of its top targets.

For the second time in a single year, the French nation had been deeply shocked by terrorist attacks with the security of France appearing less certain than in previous years. These events, and potential future attacks, illustrate the need to revisit the plan that came into effect in 2001, which implied that, “the rotating presidencies were no longer able to set the EU counterterrorism agenda solely on the basis of their own national priorities” as Dr. Ordrich Bures explains in EU Counterterrorism Policy: A Paper Tiger?

The 2001 policy from inception was so ambitious and so widely encompassing that it seemed to be blatantly detached from the ability of policymakers to put its measures into practice – a perspective that, though observed by many in EU institutions, has yet to be acted on.

EU counterterrorism policymakers have been caught-up in debates with critics that terrorism is something exceptional, something more than organized crime and that the perceived difference implies that completely novel measures and instruments need to be put in place in order to combat it. Law enforcement authorities across the EU receive considerable training and sufficient means to combat organized crime, which also uses terrorism as a utilitarian tool. Counterterrorism, however, remains a question of organized crime even though what the EU faces today is serious internal and external threats from groups like the Islamic State.

For years now many EU member states have voiced their concerns about the inadequacies of Frontex, which remains drastically underfunded and understaffed. The agency has also been misused, supplementing national services in military-like missions rather than concentrating on coordinating border control. Executive Director of Frontex, Fabrice Leggeri, reported on the agency’s efforts this past year in registering “more than 800,000 irregular border crossings,” and voluntary aid organizations, which have been shouldering a lot of the responsibility in Europe’s migrant crisis, are unable to sustain the responsibility for a long period of time.

Frontex should not have to enlist the help of volunteer organizations since this is the EU’s principle border control agency tasked with securing the EU’s external borders. But at the moment, the EU suffers from a combination of its resources being stretched too thin, poor allocation of resources, and a major blip in its prioritizing. Even though the EU has to maintain a fine balance between helping those who are fleeing conflict zones and ensuring the safety and security of its own citizens, the EU has to take stock of its recent failure to protect its own first and foremost.

The EU still accepts social cohesion superficially, pretending that freedom of movement poses little risk for the simple reason that it fails to accept the challenge of social disruption accompanying discriminate management of passports and identity checks on movement controls. The EU has chosen to settle the matter by accepting the free movements of all peoples in Europe. Alternatively, the need may soon arise to accept checking some Europeans or all Europeans.

EU authorities need to acknowledge that violence, organized crime, and terrorism share a relationship with the current migrant crisis. International human smuggling is strongly linked to other forms of transnational crime such as the trafficking of narcotics. Criminals, fugitives, terrorists, and weapons can be moved as easily as economic migrants and those claiming to seek refuge from conflict zones like Syria, Iraq, and Afghanistan, among other places.

Frontex’s 2015 risk assessment has only recently shown that human smuggling can serve as a channel for terrorist operatives into Europe where they can move freely throughout the Schengen area. This should not have come as a surprise to EU authorities even before the Islamic State threatened to place terrorists among the thousands of migrants streaming into Europe where they are safely hidden in plain sight.

At a time when EU member states are calling for less intrusion and increased state sovereignty, the area of counterterrorism and border security is a principle area in which more EU is necessary, meaning greater cooperation, cross-“border” collaboration, and communication among authorities throughout the bloc. The Schengen system has measures built in that allow for enhanced security procedures if national interests are threatened. There is no sense worrying about defending Schengen given its flexibility. Instead, the EU must acknowledge the flaws in its outdated counterterrorism policy above and beyond those in its disturbingly neglected migration policy, and consider national priories in the face of the growing threat of terrorism (as part of transnational crime).

Carnegie Europe’s Visiting Scholar, Marc Pierini, talks about this threat, noting the some thousand or so terrorists already in the EU. It is clear that the growth of this number is a real possibility with Europe’s migrant influx. Even though increased rates of migration is something that the EU should have proactively addressed, beginning with updating its decade-old policies, it will have to come to terms with its interest in maintaining open borders, but in light of increased migration. One cannot dodge the fact that EU’s own “openness” is a self-created vulnerability making it susceptible to terrorist infiltration and networking.

To a large extent, current EU counterterrorism policies are relics that predate the events of the past several years, when increased terrorist instances have been recorded and migrant flows have swelled. These are the sort of events that the EU should have seen coming and should have been preparing for by taking into account the need for consensus, flexibility in its principles, prioritization, the role of internal and external borders, and the importance of agencies put in place for the sole purpose of surveying and managing those borders.

The EU also needs to reorient its current counterterrorism policy so as to focus on EU security against the threats of organized crime. Its core principles, furthermore, need to be re-read through the lens of current events and the expertise of security professionals and experts, without allowing its critics to delay the implementation of policy through boisterous claims that systematic border control infringes on Schengen and both the concept and practice of free moment.