Counter-Protests: A Gamble for Beleaguered Governments

A counter-protest can be defined as a direct action that takes place in relative proximity to a protest that is held for an opposing cause. In many instances it can take the form of a pro-government demonstration that is intended as a reaction to massive outpouring of popular discontent toward the authorities. Such demonstrations attempt to create the impression that the anti-government forces are not the only legitimate actors that deserve to have their messages heard and seek to provide an escape valve to a government whose grip on the country is becoming increasingly fragile.

One notable example of a pro-government counter-demonstration is the march of the Gaullist supporters (numbering around 800,000) that took place in late May 1968. This happened shortly after the President of France Charles de Gaulle stated in a speech that he would not resign (but had agreed to schedule early elections) in response to the unrest led by left-leaning student groups and workers that had engulfed the country. Ultimately, the Gaullists won the snap legislative election by a wide margin, though de Gaulle never reached the heights of his previous popularity, in part due to the political fallout from the events.

In the 2010s, counter-protests have continued to be a feature of the political landscape of a number of states. For instance, the June 2013 discontent against Egyptian President Mohamed Morsi also saw the organizing of pro-Morsi counter-demonstrations, but ultimately the relatively high turnout in them was not enough to save his administration, as the Egyptian Army decided to throw in their lot with Morsi’s opponents from the Tamarod grassroots movement and depose him. During the 2013-2014 Bulgarian protests against the Plamen Oresharski government, counter-protesters arranged rallies that were at times held concurrently with the main anti-government demonstrations. However, it is doubtful that they played a part in affecting the calculations of their ideological opponents or resulted in any legitimacy dividends for the Bulgarian Socialist Party government, which was eventually unable to fulfill its mandate after losing the support of its junior coalition partner, the Movement for Rights and Freedoms. Similarly, on 10 July 2020, after finding himself under increasing pressure due to street protests that had erupted against his government and the chief prosecutor of the country, Bulgarian Prime Minister Boyko Borisov appeared in front of his supporters at a counter-protest directed against President Rumen Radev. Nevertheless, when this ultimately contributed to a heightening of tensions in the capital between the members of the two protest camps as well as a further delegitimizing of the government position, Borisov decided to refrain from repeating the exercise. The pro-Yanukovych counter-demonstrations that were held in Ukraine during the 2013-2014 Euromaidan were also ineffective and did not solidify the government’s position, with the pro-Western protests eventually escalating into a full-blown revolution and culminating in the toppling of his Russian-leaning administration.

While there have been occasions in which the counter-protests have arguably been a useful show of force, for example from the standpoint of President Nicolás Maduro whose rule has in recent years faced serious challenges from pro-democracy activists, their record in the 2010s generally does not appear to be favorable in terms of helping governments survive political crises.

In this regard, it is worth analyzing the reasons why such pro-government gatherings seem to be ineffective and actually potentially destabilizing for the politicians in power.

One significant caveat is that, with a few exceptions, counter-protests appear to be a tool used by governments that could be considered to be operating within an authoritarian or semi-authoritarian political framework. This inevitably results in the counter-protests being perceived as organized in a top-down rather than bottom-up fashion – this, when coupled with their centralized leadership, causes the segments of society that are neither especially pro- nor too anti-government to appraise them as movements that by definition lack the organic or authentic nature of the original protests. Suspicions of threats concerning loss of jobs or the offering of remuneration in order to encourage the pro-government ‘protesters’ to participate in a counter-demonstration also tend to be part of the picture. Unless the counter-protesters are a clear majority in terms of the actual human presence on the streets, even if they can lay a valid claim to being as genuine as the original demonstrations that triggered their response, they risk being placed in the undesirable category of ‘manifestations.’

Furthermore, in an increasingly globalized world that is dominated by digital media and in which social networks define the parameters of political discourses, any government’s ability to establish almost total control over the flow of information is severely compromised. The multitude of non-traditional news outlets present alternative perspectives that cannot be censored and are at the same time dominated by people belonging to younger age cohorts who tend to espouse more liberal and progressive views. These groups are likely to concur with the sentiment that the notion of the government being a benevolent guardian is outdated, which means that they have a natural inclination to lend a sympathetic ear to practically any protest. In a philosophical sense, protests can be conceptualized as being by definition a liberal undertaking due to exemplifying the right to freedom of speech and as a rule representing a challenge to any form of authoritarianism. Thus, a counter-protest is automatically regarded as anti-progressive or even opposed to free speech itself (due to appearing to be part of a ‘cancel culture’ attempting to shut down certain voices), which makes it even more difficult for the counter-demonstrators to win the battle of ideas in the virtual realm.

The power of social media notwithstanding, some of the same issues (if one is to speak from the perspective of the government) resurface in the real word as well. As evident during the Euromaidan where Kiev was significantly more supportive of the demands of the demonstrators than Ukraine in its totality, residents of capital cities tend to be more politically active and more likely to openly challenge the power of governments. Even if the politicians in power can draw on a strong numerical support in the country as a whole, they often have to contend with the reality that it is the political developments in the capital that determine the course of the events and ultimately seal their fate.

A third reason why relying on counter-protests is a risky strategy has to do with the characteristics of political power itself. If one is to take the case of Belarus, the head of state Alyaksandr Lukashenka often relies on his security apparatus as well as his ‘soft power’ – the ability to portray himself as the “good cop” (seemingly willing to put himself at loggerheads with other government officials for the sake of the people) – in order to quell dissent. A counter-protest may be regarded as a tacit admission that the abovementioned methods of exercising control are no longer sufficient, with the administration entering a downward spiral in terms of its ability to consolidate and project power.

Authoritarian leaders generally draw their strength from the informal agreement between the government and the governed that even if the human rights of the latter are suppressed, they are at least guaranteed a high degree of safety, stability, and predictability in their lives. Mass counter-protests are bound to create an impression in the popular consciousness that the country may be at the brink of violent confrontations between ideologically opposed compatriots or even a situation approaching a civil war. Thus, an authoritarian statesman risks losing the bread and butter of his legitimacy – the ability to at least pretend to be the law-and-order type who is able to stave off chaotic developments. The government of Belarus’ lax handling of the coronavirus pandemic has resulted in the most numerous anti-Lukashenko demonstrations since the country’s independence. The forces in opposition, coalescing around Sviatlana Tsikhanouskaya, have to a large extent been empowered by the realization that Lukashenko reneged on his part of the bargain – to preserve the health and safety of the population. If he had fulfilled it, then the violations of certain human rights would have appeared somewhat more palatable from the standpoint of the politically passive citizens.

The same argument applies as to why counter-protests may be an even worse idea for the government of a democratic country. They are likely to be judged by the original demonstrators as an expression of weakness or as a callous disregard on the part of the government for the preservation of social harmony. On 11 July 2020, soon after the start of the Bulgarian protests against the Third Borisov Government, Deputy Prime Minister Tomislav Donchev attempted to pre-empt such concerns, explicitly stating that “the government won’t allow for a civil war to occur, even if it had a chance to win it.” In countries with a high rating on the Democracy Index, the police is largely a neutral force when it comes to ensuring the safety of both pro- and anti-government demonstrators, so law enforcement cannot side with the counter-demonstrators in the case of conflicts arising between the two protesting factions. An actual escalation of a crisis due to the presence of militant citizens with irreconcilable political differences willing to use violence to advance their aims may result in the government starting to lose the support of the national police, which would further reduce its policy options. Democratically elected governments are essentially forced to walk on a tightrope because the counter-protest may simply become an additional and unpredictable burden that they have to shoulder.

In a sense, while in certain states the jury may still be out as to the effectiveness of counter-demonstrators in terms of offering something more than brownie points to beleaguered governments, it seems clear that on the majority of occasions, they may actually further turn the tide against the people in power. Dabbling with counter-protests does not appear to generally be the most effective strategy for a government whose right to rule has been called into question by its constituents.

Four Empires on the Rise, Part One 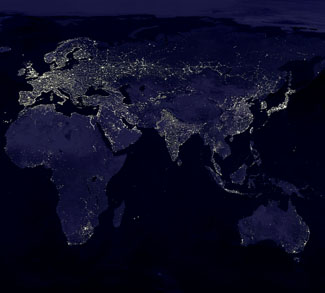