Batteries Not Included: Will Armed Drones Soon Have Perpetual-Flight Capacity? 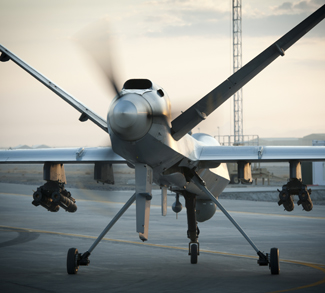 Premier remotely piloted aerial vehicles (RPAVs or simply “drones”) flight times have been drastically improving over time, granting operators the ability to stay up in their air alongside their machines for more than 40 hours. This technology isn’t new. In 2012, operators could keep their machines aloft for more than two days – at the time it was a big deal. Wired wrote that just when you thought your killer drone couldn’t get more dangerous, technologists managed to kick-up its flight time from just over a day to more than was even expected before.

Getting it Up, Keeping it Up

California’s General Atomics was behind the advancement in ways to double the flight-time of the MQ-9 Reaper, and other versions that carried all the necessary equipment for maintaining “eyes in the sky” and for keeping peace, or waging war – depending on your need or interest. Tweaks to the Reaper comprised of, among other things, additional fuel pods and these sort of changes have been warmly welcomed, especially when the United States Air Force (USAF) faces potential scale-back on the production of its military equipment, and has been forced to reassess its spending habits across the board.

For a country unlike the US, those in the fast-growing drone club that already have budgetary constraints all around them, the prospect of building or purchasing fewer drones capable of fulfilling a greater number of and longer missions is very positive, to say the least.

Such changes mean militaries could skirt around the many factors currently restricting air operations, and reducing the military and security capabilities of already-existing technologies and military instruments. One of those components was the pilot herself. It is well known that incidence-increase is fed through heightened operations or performance times. In principle, a jet fighter can remain in flight for an infinite amount of time if we’ eliminate the human component, among others. It’s a stretch to say, however, considering that one has to factor in maintenance and component-wear, oil, O2, and so on.

So far we’ve jumped from several hours of flight time in an F-16 to a machine (i.e., the MQ-9 Reaper) that can fly until it literally falls to the ground due to a lack of fuel. Now, the task is to move beyond “bot” fuel load, keeping the machine in the air forever – only coming down periodically for maintenance and fitting it with more weapons if it’s spending its armament load regularly.

Let’s keep in mind that the US and the United Kingdom (UK) (whether talking about their military or customs divisions), Italy, Israel, and other states represent a growing array of customer needs prompting innovation driven further by practical concerns.

By replacing the “bot” fuel pods, flights times can move well beyond the existing two-day mark. Inductive coupling technology can lead to in-flight recharging or “refueling.” The application is one of electromagnetic energy from one coil to another. The system therefore consists of two coils: a transmitter and a receiver. Both coils create part of a system of inductors that are magnetically coupled. A magnetic field is produced by an alternating current through the transmitter coil. The result is a current induced in the receiver coil. Batteries can then make use of the current for recharging purposes.

The technology is old, initially demonstrated by Nikola Tesla more than a century ago, but like we’ve seen repeatedly over time, innovation comes about through application and not solely invention. We’re moving toward the same technology and application in the drone field as we see in the use of electronics like mobile phones.

Researchers, including Dr. Samer Aldhaher at the Department of Electrical and Electronic Engineering, Imperial College London (ICL), have demonstrated an efficient method for wirelessly transferring power to an RPAV during flight. “The breakthrough could in theory allow flying drones to stay airborne indefinitely by simply hovering over a ground support vehicle to recharge opening up new potential industrial applications. The drone’s electronics are tuned or calibrated at the frequency of the magnetic field. When it flies into the magnetic field an alternating current (AC) voltage is induced in the receiving antenna and the drone’s electronics convert it efficiently into a direct current (DC) voltage to power it.”

The New “Wild West” of Aviation

ICL researchers noted the potential for recharging scientific equipment as far away as Mars so as to lengthen the life-expectancy of massively expensive equipment and missions, which range in the billions of dollars USD.

Wireless power transmission can fuel many types of drone tasks like those within the security realm. If drones were able to charge themselves (in reality this in some cases would still require human operators to initiate the recharge process) then we’d be taking one step close to aptly referring to these machines as drones – truly autonomous robots/systems. Even more so if the machines were to be outfitted with a brain-like system that prompts the system to charge itself – it then becomes self-maintaining.

The technology is relatively embryonic and requires an exceptionally short distance between the machine and half-a-foot of the transmission device. Exploring possibilities to expand this space are already taking place. Further prospects could lead to drones flying around the Earth and absorbing energy from the sun. Boeing and the National Aeronautics and Space Administration (NASA) are working on a prototype called SolarEagle, noting that it is an “unmanned plane… similar to Predator drones used by the US military. But unlike drones, the SolarEagle would operate on solar power, enabling it to fly continuously above Earth at 60,000 feet or higher.

Inspiration can be drawn from NASA’s challenges and the agency’s vision to circumvent them, invariably making the environment cooperate or work with you. Since equipment operating at some 65,000+ feet is impossible to get to, it has to be able to stay in flight for a really long time. The same logic can be applied to Predator drones, which could eventually increase in size due to fewer restrictions placed on them through excessive fuel pods, for instance. For MQ-9 Reapers and similar systems, wingspans can be expanded, operational ceilings would be heightened, and payloads could be increased while the possibility for shooting them down would be reduced.

Growth in these areas are almost a given, since security is inexorably connected to knowing and commanding one’s surroundings. America’s tilt to other regions of the world, will require intensified (joint) intelligence, surveillance, and reconnaissance ([J]IRS) proficiencies. The same can be said for organizations like the North Atlantic Treaty Organization (NATO) and its allies like the US in the Sahel, the Middle East and North Africa (MENA) regions, Central Asia, as well as the increasingly volatile South China Sea (SCS) and East China Sea (ECS) locales where “eyes in the sky” are not enough – they have to be accompanied by weaponry.

However, the biggest potential of possible eternal unmanned systems – not only in the air, but also ocean-going remotely operated vehicles (ROVs) as well – is that the absence of fuel pods and the longer endurances period allows for two major improvements. First, a new generation of unmanned systems could be developed: One a generation which would depart form the initial “simplicity” of the Reaper models, and combined with the current ongoing advances in autonomous and automation development would allow for much more sophisticated, advanced/newer models, which could incorporate stealth technology, high plus-mach1-cruising speeds, as the absence of fuel pods and longer wings allows for the weight of other systems to be increased. Such could and should go foremost into engine development.

Furthermore, and foremost, any batteries included, near-eternal unmanned systems would solve one of the US military’s most pressing problems: namely how to protect their fuel tankers, which are the backbone of the air force in times of conflict. These, large, bulky, slow flying aircraft are essential for sustaining air operations, yet at the same time are amongst the easiest targets. It thus comes as no surprise that within strategic and tactical air combat thinking, both the People’s Liberation Army Air Force (PLAAF) and the Russian Air Force have made these tankers priority targets.

For a long time the US dominated the skies and no feasible threat could arise against these tankers, however recent innovations and developments of surface-to-air-missiles (SAMs) and advanced air-to-air-missiles (AAMs), China and Russia have put these tankers gradually in reach of such systems. Accordingly, the US will need to either protect these tankers, which is rather difficult, or simply operate tankers beyond the range of such missiles, which in turn would mean that other jets would have limited operational time. The emergence of batteries included, near eternal unmanned systems would remove such vulnerabilities and would relieve the US air force from one of its biggest headaches.

As such, long endurance drones should not only be viewed in a singular vision of only the systems itself, but rather in the larger framework of joint operations. Long endurance drones, with increased wingspan, could in essence function as tankers for other, possibly piloted aircraft.

It becomes apparent that increases in operating time could do more than provide a new generation of systems for operations beyond existing borders, both within the atmosphere and in outer space, while at the same time creating a mini-revolution in military affairs (RMA) that helps to extract the risk and uncertainty from military and security-related scenarios, at least to some extent. Every military conflict has been limited by logistics, and indeed the importance of logistics in military conflict is well documented. The use of endurance-less drones would remove a larger part of this logistical difficulty, and could in theory allow for a near-constant presence on the battlefield, and possibly even a near-constant, or even constant conflict.