A war of words is simmering between the governments of Iran and Russia, potentially placing the latter more squarely in the Western camp on any future attempts to turn the screw on Iran’s nuclear program.

On Monday, the Russian Foreign Ministry accused Iran of “fruitless and irresponsible rhetoric”– a not-so-subtle response to earlier Iranian criticism over Russian support for a new round of UN sanctions last month. The Iranian government has also made it clear that it is disappointed over President Medvedev’s public admission that Russia sees an evolving military component to Iran’s nuclear program.

So, is this merely a superficial war of words or is Iran truly at risk of losing its important and long-term ally in Moscow? In other words, would Russia be willing to sacrifice a substantial economic stake in Iran on the altar of a US-Russian ‘reset.’

The answer is: probably not. Russia has been a long-term supporter of Iran and the economic stake in Russian-Iranian relations is substantial.  Gazprom is part of a $2 billion consortium that is developing Iran’s vast South Pars gas field and other Russian oil companies like Lukoil have operated in Iran for a long time (though Lukoil recently exited the Iranian market due to pressure from sanctions.) In short, Russia has somewhat of a charmed position in the Iranian energy market and it will be hesitant to jeopardize it.

That said, the security fallout of a nuclear-armed Iran is very real to the Russians and the longer that Tehran plays the part of international pariah, the longer Moscow can play the part of major gas supplier for Europe. The only ex-factor in the situation is China; particularly whether or not Beijing could step in, weather the international isolation, and by doing so not only throw Tehran a life preserver but establish itself as top dog in the Iranian energy market.

Around the internet, the rhetorical battle being played out between Russia and Iran has received very little attention, though this is possibly due to the gravity of secret documents on the war on Afghanistan being released. The Jerusalem Post not only gave the story a high-profile spot, but also used language that amplified the importance of Russia’s response, saying that Moscow had “turned” on Iran.

The story of Russia’s rebuke was notably absent from Press TV, which instead chose to run a piece entitled “Iran deplores new EU sanctions.”

In other news concerning Iran’s nuclear program, the EU instituted unilateral sanctions aimed at Iran’s oil & gas industry, a move following close in the footsteps of the United States. 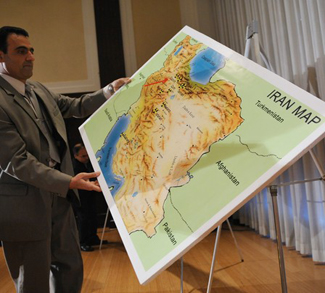