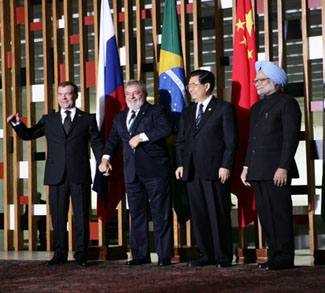 BRIC countries are set to propose a resolution in support of Iran at the UN General Assembly; a further sign that the forum could evolve a more political dimension in the future.

The resolution comes down against countries that impose unilateral sanctions without approval from the UN Security Council. Since it is a General Assembly resolution, it doesn’t carry much legal authority. However, it is important for two reasons: First, it seeks to bolster the authority of the UN Security Council and the decision-by-consensus process that it entails. Routing major international decisions through the Security Council obviously benefits China and Russia, as it gives them a final say on the matter. Secondly, the BRIC resolution is another example of political coordination by BRIC countries on the international stage.

It’s doubtful that BRIC countries will be forming any coherent international strategy any time soon, given the substantial internal differences that exist among members, but instances like this prove that such a development is possible.

In other news pertinent to Iran, Russia has formally banned the sale of S-300 air defense missiles to Tehran. The sale would have substantially boosted Iran’s air defenses and made a hypothetical Israeli air strike a far more risky affair. The BRIC resolution and Russia’s halting of the S-300 sale serve as examples of Moscow sitting on the fence and playing both sides off on the issue of Iran. It should be noted however that the axing of the S-300 sale is far more tangible than a non-binding UN General Assembly Resolution.

The Business Standard points out that BRIC countries could be a force on the UN Security Council this year:

“All the BRIC nations – Brazil, Russia, India and China – would be member of the UN Security Council in the coming year and could present a united front on several contentious issues”

“BRIC members would be four out of the 15 members on the Security Council and South Africa could also win a seat, this year, as it was an endorsed candidate for Africa.”

And Press TV, Iran’s state-owned media outlet, is trumpeting the BRIC move to counter sanctions on their website:

“Following the imposition of US-engineered UN Security Council sanctions against the Islamic Republic in June, the United States and the European Union imposed further unilateral sanctions on Tehran over its nuclear program…

Fearing those tensions could escalate into war, Brazil had earlier tried to evade the additional sanctions, intermediating a nuclear fuel swap deal between Iran and Turkey. That agreement was largely ignored by the United States.”