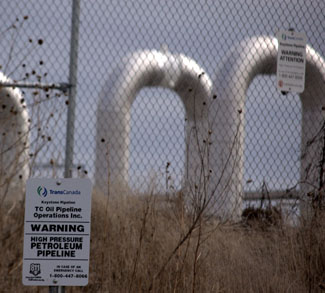 With so much media attention surrounding US airstrikes against ISIS and increased concerns about the spread of the Ebola virus, it’s understandable that many Americans aren’t focused on the upcoming midterm elections. These elections don’t generally tend to elicit much excitement but interest is particularly bleak this year, with nearly 40% of people reportedly not paying any attention at all according to a recent poll from the Pew Research Center.

But the outcome of the November 4 elections could have a host of important implications for the final two years of Barack Obama’s presidency. The Republicans are widely expected to retain control of the House of Representatives, and many in the GOP are bullish about the prospect of regaining control of the Senate. This would result in more control over prominent congressional committees, thus putting pressure on the president to take action on certain issues.

The most important of these issues for US-Canada relations is the potential for a forced Senate vote on the increasingly costly Keystone XL Pipeline project – a name that has become synonymous with Washington logjams. Up until now, the president has refused to make a final decision on whether the project will go forward.

The 1,179 mile pipeline was initially proposed by Calgary-based TransCanada Corporation more than six years ago. The project will have the capability to transport upwards of 830,000 barrels of oil per day from the Canadian oil sands to a network of existing U.S. refineries.

Supporters of the plan point to its potential to create thousands of construction jobs and grow the refining industry. For that reason, it has garnered the support of some major American labor unions. In addition, Keystone XL will purportedly allow the United States to lessen its dependence on foreign oil and shift imports of crude away from unstable and unsavory governments. The pipeline also has broad support among the American people, with 65% in favor of it according to a September 2013 survey.

But the TransCanada pipeline has united environmental groups across America and has been a tremendous grassroots organizing success. At least part of the opposition seems to be about the symbolic battle to stop climate change no matter what, which has continued to gain strength with each passing year of indecision. Specifically however, opponents contend that increasing production of oil sands crude will exacerbate climate change and that a major spill or leak would bring about tremendous environmental consequences, jeopardizing water supplies, polluting air, and harming wildlife.

President Obama has said that he will not approve a proposal that substantially increases climate change. In part, he’s been able to avoid decisiveness due to the lengthy review processes that are required when a proposed pipeline will cross international boundaries. Most recently, the president delayed a decision in April after the US State Department produced 17,000 pages of research, citing a legal case that is currently sitting with the Nebraska Supreme Court.

This dispute goes back to 2012 when the Nebraska legislature gave the governor the authority to approve a revised route in the state. These issues are normally decided by the state’s Public Services Commission, and a lower court held earlier this year that the governor should not have interrupted the process. The Supreme Court’s ruling is expected to come later this year or in early 2015, thus giving President Obama grounds to further delay making a decision.

There have been a number of efforts by lawmakers in Washington over the years to push a bill through Congress that would put an end to the regulatory delays and presidential hesitancy that has blocked the project. The Republican-controlled House of Representatives has voted to approve the pipeline on seven occasions, including as part of a wide-ranging bill in September that included changes to the president’s health care law. But Democratic Senate Majority Leader Harry Reid has consistently blocked any Keystone proposal from being voted on, in an effort to ensure that the normal process of State Department review and White House approval are not circumvented, and to prevent the GOP from being able to claim victory on the issue.

The closest that the pipeline has come to attaining senatorial approval was a 62-37 vote in favor of a non-binding motion that was appended to a budget resolution. This outcome underpins Republican hopes that they have enough bipartisan support to pass the pipeline should they net the six seats needed to regain control of the Senate. Such an election result would displace Reid as majority leader, presumably to be replaced by current minority leader Mitch McConnell provided that he wins his tightly-contested Kentucky race against Democrat Alison Lundgren Grimes.

Republicans have said they will make energy a priority if they regain control of the Senate, which could pave the way for fast-tracked legislation seeking approval of Keystone XL in early 2015. It could take the form of a stand-alone bill or as part of a ‘must-pass’ piece of legislation that is tied to government spending. Either way, it has the potential to put President Obama in a difficult position.

Increasingly, more Democrats are joining Republicans in supporting the pipeline as an overarching sense of ‘enough is enough’ seems to be sweeping through Washington. However, any Senate vote that fails to garner a two-thirds majority cannot override a presidential veto, which means that without 66 votes the president can prevent the pipeline from being approved.

President Obama would still be faced with a serious dilemma if a binding Senate vote received more than 60 votes, but less than 66; either approve the pipeline, something that he has consistently avoided, or veto a project that not only has some degree of bipartisan support, but a majority of the American public behind it as well.

The best-case scenario for Obama is to avoid this quandary by ensuring that the Democrats maintain control of the Senate, in which case he will face less pressure to make a decision. This favorable outcome also includes if there is a tie of 50 seats for each party, in which case vice president Biden would cast the tie-breaking vote.

While it should still be a tight race, most indicators are predicting a Republican Senate, including Nate Silver’s FiveThirtyEight, which is currently forecasting a 60% chance of GOP victory. Hampering the Democrat’s road to victory is that a number of long-time Democratic senators in typically conservative states like South Dakota, West Virginia, and Montana have announced their retirement. Also problematic is that congressional elections in the midst of a president’s term traditionally favor the opposition – a trend accentuated by Obama’s spiking unpopularity, which has caused many Democratic candidates to distance themselves from him on the campaign trial.

For its part, the Conservative Party of Canada would welcome any political change in Washington that brings Keystone XL to fruition. The drawn-out approval process has been a source of irritation in Ottawa, where Prime Minister Harper views pipelines as being essential to Canada’s national interest. The Canadian prime minister believes that political considerations will inevitably be overrun by economic realities and widespread public support for the project. In his words: “it takes a lot of energy to repress and to block a decision that is clearly and overwhelmingly in the national interest of the country.”

The potential economic impact of Keystone XL for Canada is substantial given that the country ships over 98% of its oil exports to the United States. The Canadian Energy Research Institute estimated that if the pipeline is not built and no alternate pipeline takes its place, the Canadian economy would miss out on $632 billion in additional GDP over the next 25 years. The lion’s share of this loss of revenue would be shouldered by Alberta.

But in actuality, regardless of the outcome on November 4 and whether the pipeline is approved or not, crude from the Canadian oil sands will still find its way to US refineries via by tankers and rail. This would seemingly mitigate the substantial financial loss to the Canadian economy if the pipeline is not improved, but transporting by rail and tanker would reportedly result in considerably more greenhouse gas emissions and carbon increases.

While Keystone XL remains a project of significant importance, the parties have, in many ways, moved on. Gaining Washington’s approval for the pipeline remains a major priority for the Canadian government, but with or without the Americans, Canada will continue to develop the oil sands and diversify its exports. This is demonstrated by the legislative approval of the Enbridge Northern Gateway Pipeline, a project that will transport more than 500,000 barrels of oil per day from Alberta to Asia.

The industry itself has certainly not slowed down due to the drawn-out approval process; according to TransCanada, since the application was filed more than six years ago, American production has increased two million barrels per day, and Canadian production has improved by half that.

Keystone XL is no longer even the continent’s largest pipeline project, having been supplanted by Energy East Pipeline. This TransCanada project is a 2,858 mile pipeline that will move 1.1 million barrels of crude oil daily from Alberta to facilities in eastern Canada where it can be used in North America, or shipped to Europe or Asia. One of the advantages of this pipeline is that because it runs within Canada, it does not require US approval.

In many respects, it seems that both supporters and opponents of the Keystone XL can claim some semblance of victory. The pressure applied by environmental groups has been instrumental in the lack of resolution that we have today. On the other side, the oil continues to flow and countless miles of pipeline have been built in the past six years without a fraction of the attention or opposition that Keystone XL has generated. While it is difficult to say with any certainty whether or not the TransCanada project will ever be built, we should have a great deal more insight into its likelihood after November 4.

Nigeria’s Gas: Relief or Redux for the Resource Sector?