The Sinai Insurgency in Egypt 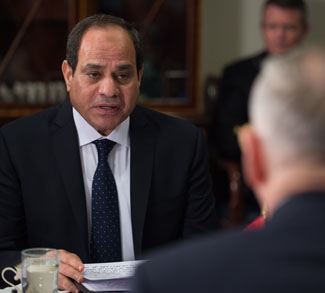 Three years of warfare have failed to crush Islamic State’s Egyptian affiliate, the so-called Islamic State in Sinai Province (IS-SP), or ‘Wilayat Sinai’ in Arabic, and the group continues to expand the targets of its activities. The mountainous terrain of the Sinai Peninsula provides the group with many strongholds, particularly in the north, while the peninsula itself has been underdeveloped for decades as the central government focused its efforts on the mainland. Local grievances mean that although IS-SP’s organizational predecessors were originally formed to fight Israel, its goals have since expanded to include driving the Egyptian authorities out of the Sinai and imposing its austere fundamentalist version of a ‘true’ Islamic lifestyle over the civilian population living there. Aping IS in Iraq and Syria, the group has formed its own religious police unit and has begun to target the Coptic Christian minority in the peninsula and on the mainland. While still no match for the Egyptian military, IS-SP has shown increasing sophistication in its terrorist attacks and a growing ability to carry them out beyond the Sinai.

The roots of IS-SP. The present terrorist group originally formed in 2011 from indigenous Salafi jihadi groups, some of whom had ties to Palestinian terrorist networks and/or Al Qaeda veterans based abroad. Then calling itself Ansar Beit al-Maqdis (Supporters of Jerusalem), the group dedicated itself to attacking Israelis and Israeli interests. However, during the chaotic aftermath of the fall of Egypt’s dictator Hosni Mubarak, the Sinai Peninsula’s marginalized Bedouin tribal communities drove the authorities out of much of the area. The resulting power vacuum strengthened the hand of local militants, despite later efforts by Cairo to counter them in 2011-13.