Indonesia became the first Southeast Asian country to operate submarines with two Whiskey submarines purchased from the Soviet Union via Poland in 1959: the RI Tjakra (S-01) and RI Nanggala (S-02). The decade saw a modernization of the Indonesian Navy, along with the purchase of ten other Whiskey-class submarines in 1962.

Later, KRI Cakra-401 and KRI Nanggala-402 were ordered to replace the Whiskey-class submarines made in the Soviet Union, namely RI Tjakra SS-01 and RI Nanggala SS-02, which had been retired. The two new submarines were West German Cakra-class, Type U-209/1300 models. The vessels were ordered in 1977 via the Ship Procurement Project Team (Yekdakap), which was led by First Admiral TNI Mochtar.

The KRI Nanggala-402, recent subject of a tragic accident at sea, was originally completed and delivered to the Indonesian government on July 6, 1981. Minister of defense/security commander of the armed forces, General TNI Andi Mohammad Jusuf Armin (M Jusuf), inaugurated the vessel with the name KRI Nanggala-402 at Dermaga Ujung, Surabaya, East Java, on October 21, 1981. Meanwhile, KRI Cakra-401 had been inaugurated one year earlier.

The KRI Nanggala-402 had a weight of 1,395 tons; its dimensions were 59.5 meters x 6.3 meters x 5.5 meters. The vessel was powered by an electric diesel engine, 4 MTU diesel super charger, one shaft which produces 4,600 horsepower. The engine was capable of propelling the ship to a speed of 21.5 knots. It was manned by 34 sailors, and was equipped with a sonar of the CSU-3-2 suite. The power from the low-speed type Siemens electric motor was channeled directly (without speed reducing gears) through a shaft to the propeller of the ship. Its weapon loadout consisted of 14 21-inch torpedoes in eight AEG-made tubes, with targeting via Zeiss-made periscopes positioned next to a Maschinenbau Gabler snorkel.

The KRI Nanggala-402 received several repairs over the course of its service. The first was carried out at the Howaldt Deutsche Werke shipyard in Kiel, Germany, in 1989. Two decades later, the KRI Nanggala-402 underwent a full two-year overhaul at Daewoo Shipbuilding & Marine Engineering (DSME), South Korea, from 2004-2006. In 2009, repairs were made once again in the same shipyard, and were completed in 2012.

During this last round of repairs, the sonar system was modernized, with the preexisting STN Atlas Elektronik CSU 3-2 system swapped out in favor of a L-3 Elac Nautik’s LOPAS 8300 passive sonar, along with a Kongsberg MSI-90U MK2 CMS. The radar and combat controls were also updated. Once repaired, the Nanggala was able to fire four torpedoes simultaneously at four different targets, and launch anti-ship missiles such as the Sub-Exocet and Sub-Harpoon. In addition, the dive depth was increased to 257 meters (843 feet) and the maximum speed was increased from 21.5 knots (39.8 km/h) to 25 knots (46 km/h).

Lessons learned from the sinking of Nanggala-402

Tragically, the Nanggala-402 was declared subsumed or sunk on April 24 in waters north of Bali. The submarine had been missing since April 21. Confirmation was obtained after the search team found debris believed to belong to the vessel in nearby waters, and the crew members were subsequently confirmed to be deceased.

The working assumption from the search team was that the Nanggala developed a crack, based on recovered debris.

In reference to the maintenance schedule for the Nanggala-402, which last saw repairs in 2012 in Korea, we can conclude two things. First, it is possible that the vessel was deemed to be in good working condition, thus rendering another round of repairs in Korea unnecessary, even though the vessel had not been worked on for over eight years. Second, parties might not have paid close enough attention to said maintenance schedule. Thus, it is possible that this kind of information is not well integrated and analyzed in such a way as to influence top-level strategic decision-making.

The Nanggala-402 incident exposes some hard realities in Indonesia’s armed forces, and its maritime defenses in particular. Before the Naggala-402 was sunk, Indonesia only had five submarines with which to ensure maritime security over a vast area of ​​3.2 million km. Now there are only four left. In fact, given the extent of Indonesia’s maritime territory, Indonesia should have 12 submarines at the very least. Yet unfortunately, in a 2019 audit of all of Indonesia’s defense equipment, only 50% of it was deemed suitable for use. This is an alarming figure considering the vast area of ​​territory that Indonesia must assert sovereignty over.

In addition, there is a threat from China. China, with its modern and vast military, has begun to maneuver deeper into the South China Sea conflict zone. On April 6, 2021 the Philippine military detected 200 ships from China entering their EEZ territory. Indonesia itself has experienced similar incursions, where Chinese ships enter freely into Indonesian waters, sparking tensions between the two countries.

This conflict will not be resolved in the next 4-5 years. Therefore, Indonesia must begin to improve its defense posture. The government must produce short-, medium-, and long-term plans to respond to Indonesia’s defense challenges. The short term begins with building new alliances. In the medium term, by increasing economic cooperation with other countries, and lastly in the long term by carrying out a military modernization program.

Domestic players such as Pindad, a state-owned company in the field of military equipment, have indeed become suppliers of weapons and equipment to the Indonesian military. But the numbers are still limited to sectors such as tactical vehicles and ammunition. If the government is serious about modernizing the military, it needs to produce large-scale financial support to encourage companies like Pindad to conduct research and innovation, allowing them to produce weapons and defense equipment that are on par with foreign producers. Indeed, modernizing the military is a costly and time-consuming effort. And, so long as the defense budget remains at 1-1.5% of GDP and planning is limited to the replacement of defense equipment, it will proceed slowly. But the Nanggala-402 incident underscores just how essential the initiative is for Indonesian security. 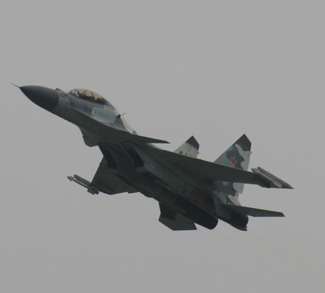