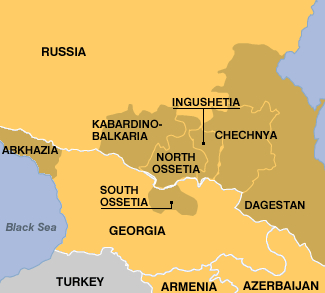 Eastern Europe is still tattooed by the Soviet Union.  Breakaway regions in Georgia and Moldova—Abkhazia, South Ossetia and Transnistria respectively—are autonomous territories in everything but name. The three act as autonomous states but are not recognized internationally.  They are linked by their mutual recognition of each other’s independence and, more importantly, by their dependence on Russian political and economic policy.  These common ties become increasingly apparent when examining the recent presidential elections and Russian political appointments in the respective regions, says Elena Mizrokhi of Geopoliticalmonitor.com.

Aside from Russia, only Venezuela, Nicaragua, Nauru, and Tuvalu have recognized Abkhazian and South Ossetian independence.  No countries have officially recognized Transnistria.  The three breakaway territories are therefore cut off from the international community—both economically and politically.

Separatist movements in Abkhazia, South Ossetia, and Transnistria, are a legacy of Stalinist Russia.  In the 1920’s, Stalin introduced the “nation-building” policy of korenizatsiya (which roughly translates to indigenization or nativization) designed, in theory, to foster ethnic and lingual integration.  In practice, Stalin’s policy dispersed pockets of ethnically concentrated people as a means of diffusing potential opposition to the communist regime.  This strategy sowed the seeds of conflict that sparked nationalist movements during the final years of Perestroika (1988-91). The result was violent confrontations in Tbilisi and Chisinau and protracted guerilla warfare in Abkhazia lasting until 1994.