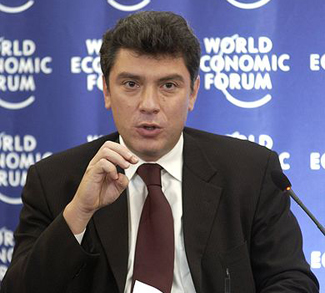 Boris Nemtsov, 55 years of age, former vice-premier under President Boris Yeltsin’s Russia of the 1990s, and lately co-chairman of the People’s Freedom Party. He was one of President Vladimir Puton’s fiercest critics, and was assassinated on the evening of February 27. He was hit in the back by gunfire just 200 meters away from the Kremlin in the company of his 23-year old girlfriend, Ukrainian model Anna Duritskaya, who was unhurt. Hours before his death, Nemtsov had spoken on Radio Ekho Moscow to encourage citizens to participate in an opposition rally to be held on March 1. Nemtsov was one of the event’s organizers along with the anti-corruption activist Alexei Navalny (a more influential political figure) who was sentenced to 15 days in jail on February 15.

With no evidence, Western leaders and media have insinuated that the Kremlin was involved in Nemtsov’s assassination, stressing his condemnation of Russia’s involvement in Ukraine and Putin’s authoritarian politics. However, Nemtsov’s killing and its motives are likely far more complex and nobody should rush to conclusions.

Former Soviet leader Mikhail Gorbachev said the assassination of Boris Nemtsov “is an attempt to complicate the situation in the country, even to destabilize it by ratcheting up tensions between the government and the opposition. The former deputy prime minister and once Kremlin frontrunner was doubtlessly unpopular in Russian power circles, but he was far more influential back in the 1990s. The Kremlin even goes so far as to describe Nemtsov as a political “marginal.”

Nemtsov rose to prominence as plenipotentiary representative of the president of the Russian Federation in the Nizhny Novgorod region. He oversaw liberal reforms that received praise from former British Prime Minister Margaret Thatcher, and in 1997 he was appointed first deputy of the Russian Federation with the specific task of reforming the energy sector. Yeltsin’s enthusiasm over his protege Nemtsov waned in 1999, when Yeltsin chose Vladimir Putin to succeed him as president. In 2003, Yeltsin confided to Moscow News: “I studied Nemtsov, and I realized he was not ready to be president.” Nemtsov had initially supported Putin only to criticize the latter’s ever more nationalist turn.

Over the past few years, Nemtsov was certainly a leading opposition figure, but still not as popular as he had been in the past. His party failed to get the minimum 5% needed for a seat in the Duma (the Russian Parliament). In 2013, he became a legislator in the parliament of the Russian city of Yaroslavl. Nemtsov remained, nevertheless, a recognizable figure, both inside Russia and – probably most importantly – in the West. He encouraged a policy of rapprochement with the West, rejecting Putin’s push for a Eurasian union with the goal of challenging US global dominance. Nemtsov gave several interviews over the past few days, presenting sharply pro-Western views, going as far as proposing to unveil evidence that – in his opinion – proved Russia’s direct interference in Ukraine’s civil conflict. He blamed Putin’s policies for the deterioration of the Russian economy by attracting Western sanctions. Moreover, he expressed a fear of “being killed by Putin.” For his part, Putin condemned Nemtsov’s passing as “a cruel murder and a provocation,” insinuating a “false flag” operation, that is, an act performed in order to attribute responsibility to anyone other than the perpetrator. Putin also remarked that Nemtsov “has left a mark on history, politics, and public life, and the Russian who always defended his point of view, honestly.”

The ongoing investigation suggests that the operation was very ‘professional’ and carefully planned; but, as tempting as it might be for many Western leaders to insinuate the Kremlin was responsible, the fact is that this hypotheses should be carefully evaluated because there are some important considerations challenging the ‘Putin did it’ logic.

It is ‘standard practice’ for anyone in Russia with a modicum of power, in politics and in business, to never leave the house without an armed escort. Even Hollywood has used this reality as a frequent plot mechanism in many of its movies featuring contemporary Russian themes. How, then, was it possible for Nemtsov, who had clearly expressed fear for his life (as did his mother) to be walking at 11:30 pm near the Kremlin with Ukrainian model Anna Duritskaya? In addition, Putin’s official spokesman, Dmitry Peskov, pointed out in a note that Nemtsov was hardly a political threat: “If we take into account Putin’s popularity, then Nemtsov was rather an ordinary citizen.” Moreover, in 1998, Nemtsov was part of the then-powerful and much-hated Anatoli Chubais’s economic team; he was forced to resign as deputy prime minister over the collapse of the economy and for having prescribed neo-liberal economic policies that brought the collapse of the ruble.

In other words, the political threat to Putin was minimal.

Some western leaders, acting prudently, have shown greater wisdom than the media in carefully avoiding to direct their blame toward the Kremlin. Germany’s Chanchellor Angela Merkel was “horrified”, The UK’s Prime Minister David Cameron was “shocked and disgusted.” Eduard Limonov, Russian writer and political dissident, founder and former leader of the banned National Bolshevik Party and strong opponent of Vladimir Putin challenged any allusion of Putin’s involvement in Nemtsov’ murder, noting that “had they killed the true leader of the Liberals, Aleksej Navalnyj, I could understand. But Nemtsov, for the Russians was just a political retiree. One which, moreover, was a protagonist of the Yeltsin era, who left memories of injustice, thievery, and corruption here.”

In the anti-Russia rhetoric that has characterized coverage of the former ‘superpower,’ the media and Western leaders have often failed to recognize that after the humiliation of the immediate post-Soviet era, Putin has raised Russia from the abyss and has instilled in Russians dignity and self-worth, which is why he is so popular and why the ‘oligarchs’ seen as pariahs.  President Putin has the support of a vast majority of the Russian people; has allies in China and among the BRICS (Brazil, Russia, India, China, South Africa) and has the will and the power to “do the right thing.” It remains to be seen if he can fulfill this historic challenge. Of course, in its campaign to consider their responsibilities towards the country, the Kremlin will have aroused the oligarchs’ anger, generating what is, for the time being, an unspoken fear of a coup sponsored by the new wealthy elites – as Gorbachev has implied.

The circumstances of the assassination and the presence of Ukrainian model Anna Duritskaya suggest that this may well be a matter that extends beyond Russia’s borders involving a more ‘passion’ or ‘jealousy’ related crime, entirely devoid of political undertones. Perhaps it was a criminal act by ultra-nationalists, who wanted to punish Nemstov for his seemingly anti-Russian positions on Ukraine. Nemtsov’s assassination is then politically insignificant even if symbolically important and the careful former KGB station chief Vladimir Putin would know the difference and its value well enough that his complicity should, if not excluded outright, at least be only a secondary rather than primary consideration.

Mr. Putin is more concerned with the fact that Russia has formally entered a recession for the first time after 2009; this time, though, the prospects of recovery are bleaker. Putin is worried, while the average Russian is feeling anguished by Deputy Economy Minister Alexei Vedev’s unpleasant announcement that GDP growth for 2015 might be -0.8%, worse still than 2014, which is predicted to close at 0.5%. Sanctions, the collapse of oil and the depreciation of the ruble have combined to give Russia and Putin the biggest blow since the start of the Ukrainian pro-Western ‘Euromaidan’ revolt in December 2013. The government’s admission of recession has come at a very difficult time, when the collapse of the ruble seems unstoppable and consumer prices are growing by the day. The causes of the disaster are obviously attributable mainly to the Western sanctions and Russia’s predictable annexation of the Crimea region. The drop in oil prices has merely served to highlight Russia’s worsening international relations. For years, Putin had urged experts and oligarchs to diversify the economy; manufacturing and agriculture in particular. Russia, thanks to policies that many Russians have attributed to Yeltisn-era liberals such as Boris Nemtsov, has become dependent on imported goods, which now cost much more. Yet Putin’s government shows no signs of gasping, nor has it indicated any halting of its ongoing involvement in neighboring Ukraine, largely because such policies have proven wildly popular with the Russian public (Putin enjoys more than 80% popularity). Until that changes, the Russian government will likely maintain its course despite growing economic pressures. Nevertheless, the rhetoric of not bowing to foreign pressure contrasts with requests for negotiations to end the conflict, which means that at some level Putin is worried.

Russia has appealed to the Western powers to abandon the sanctions policy in the interests of the global economy – requests that have resonated with many European citizens and officials who worry that more sanctions would only add to their own economic woes. That said, Putin will not budge to abide by Western demands; this is not in Putin’s personal leadership ‘vocabulary.’ The 80% plus approval ratings are a reflection of his ‘defiance’ against those who have ‘ganged up’ against Russia. To ensure popularity remains high, Putin will likely continue to shore up support for Ukrainian rebels rather than abandon his ambitions.

Putin will encourage Russian businesses to diversify, resume industrialization while continuing to develop its resource sector even as it invests in replacing imports from the West with local goods. In shifting the import focus away from Europe to China, Russia must avoid the temptation to base the relationship on the familiar pattern of ‘oil and gas in exchange for finished products’ that has been a signature of the recent past. Moreover, Putin has challenged the rentier capitalists that have dubiously earned billions of dollars in the past two decades. The so-called, ‘oligarchs,’ will be targeted such that their assets, privatized at ridiculously low prices in the roaring 1990s of the Boris Yeltsin era, will be re-nationalized. This will include banks, and the foreign trade and strategic industries. President Putin has urged his government to adopt new legislation to prevent the use of offshore tax havens making Russian citizens subject to taxes at home no matter where their income comes from. The measures are targeted towards the very wealthy Russians who systematically try to move their goods and families abroad, fueling capital flight, one of the problems that Putin is no longer willing to tolerate, especially when, for factors both cyclical and structural, the Russian economy has started to slow down for the first time since he became president 14 years ago. Estimates suggest that capital flight from Russia reached over $123.8 billion in 2014. It is indeed a measure that meets the favor of the popular classes, as well as the middle class Russians whose welfare, unlike the oligarchs, is the fruit of labor and the economic growth of the past few years.