Around 200 Islamic State fighters have pushed the remaining Libya Dawn-aligned Misrata militiamen out of Sirte, consolidating their hold on the hometown of former dictator General Gaddafi. They also took control of the Sirte Gulf Power station in the process, a power plant that helps supply electricity to central and western regions of the country.

The power plant is located on the western coastal road that leads to Misrata. Ordinarily one would assume that there are no more gains to be made there, as the powerful Misrata militias are one of the main pillars holding up the Tripoli-based Libya Dawn government. Yet the militia that pulled out ahead of today’s ISIS advance, Brigade 166, has complained of a lack of reinforcements from Tripoli and that men who were supposed to guard the power plant abandoned their posts, which led to their original withdrawal from Sirte in late May.

It’s possible that bottomed out oil exports are finally being felt in the form of unpaid salaries in the rank-and-file. This could create renewed willingness for compromise and a shared sense of ownership of Libya’s resource wealth (the kind of spirit that prevailed through 2013). On the other hand it could fuel the chaos by further Balkanizing an already fluid set of paramilitary alliances such that instead of two competing governments we see four or five. 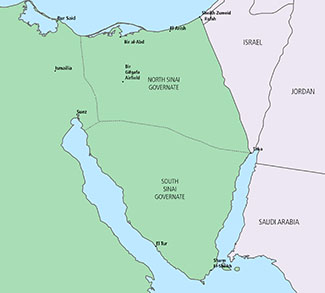 China in Talks for a Military Base in Vanuatu