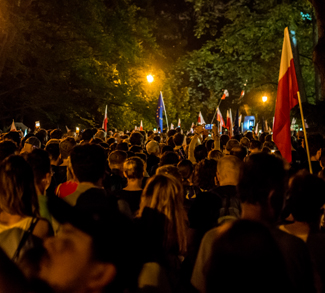 There was an unexpected turn of events earlier this week in Poland’s ongoing political drama. President Andrejez Duda decided to veto two controversial bills targeting the country’s judicial independence. The proposed changes would have given parliament the authority to appoint and dismiss members of the National Council of the Judiciary; in effect, placing the Supreme Court under the control of the ruling party. It took all but eight days of nationwide street protests and threats of EU sanctions to thwart the Law and Justice Party’s plans to centralize power.

Attempts to bring the judiciary under executive control fit into the overall pattern of Law and Justice Party (PiS) rule since taking power in 2015. Over this time, the government has often sought to undermine the constitutional court, politicize the civil service, and turn public media into its own propaganda tool. More recently, its agenda has met with popular pushback in the form of protests. Poles took to the streets en masse over the past two weeks in support of the structural checks and balances meant to guard against a return to authoritarianism. Their efforts have borne fruit with Duda’s veto, but the fight is far from over.

In terms of support, with a little over a third of the popular vote, the ruling right-wing Law and Justice Party has the mandate to rule. But it still lacks the constitutional majority required to change the political system. Although GDP is rising steadily, socioeconomic inequalities have also widened since Poland joined the European Union. Moreover, the majority of Poles have lost trust in the judiciary and are unhappy with the state of social services. Nevertheless, the PiS’ desire to consolidate authority and expand its mandate to address these problems has been met by a wave of anti-government protests.