Honduran President Juan Orlando Hernández was sworn in on 27 January to start his controversial second term. Over 30 people have been killed in post-election violence since a disputed vote count gave the conservative Hernández an unexpected victory over his left-wing opponent. This controversial re-election, which was not backed by the Organization of American States (OAS) due to irregularities with the electoral process, is not the only difficulty facing the Honduran leader. Despite running on a law and order program, the Hernández administration has been dogged by accusations of corruption and links to drug traffickers. The president, an authoritarian conservative nationalist, had claimed a zero-tolerance policy towards drug traffickers and their influence during his first term. But serious allegations by the Associated Press have now been made against his new chief of police, José David Aguilar Morán, who ironically had just been promoted to the post as part of the administration’s efforts to clean up the force and crack down on crime.

Part of the reason the political battle over the election has been so bitter is that many of the opposition feel that any second term for Hernández is unconstitutional. Hernández first came to power in January 27, 2014, after winning the 2013 Honduran presidential election. A member of the right-wing National Party of Honduras, he took over from the previous National Party administration of President Porfirio Lobo, which came to power following a military coup in 2009 against the elected presidency of Manuel Zelaya. At the time, the coup was justified by many Honduran lawmakers, including Hernández, because the left-wing Zelaya had organized a non-binding poll on holding a referendum on convening a constituent assembly to rewrite the Honduran constitution so as to allow presidents to serve longer than one term.

Part-way through his own first term in 2015 however, Hernández persuaded the Honduran Supreme Court to void single term limits on the presidency.

Mexico: Assassins on the ‘Cheap’ 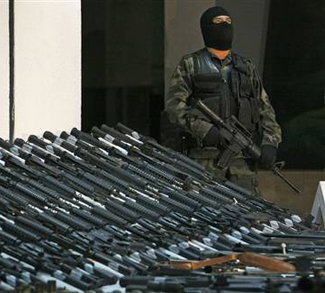