Mexico: Assassins on the ‘Cheap’

Hired assassins in Mexico are willing to work for suppressed wages not so much out of economic desperation but because murder-for-hire has proven to be a gateway to more lucrative criminal activity. Factor in the uncontrollable flow of arms and the unlikelihood of criminal prosecution, and the assassination business is booming.

How much does a hit man costs? “It depends on the type of hit man,” Alfredo Quijano, the editor of El Norte, a local newspaper from Juarez, México, said. “The good ones are expensive, but you can always find someone who would do the work for 75 or 150 euros.” For 150 euros, an inexpert gang member can get a low profile target killed; for 15,000, an expert can kill the chief of police in Mexico City, or at least that is what the hit man who killed Mr Robles Liceaga, the chief of police in Mexico City until 2002, said he was paid.

The cost of an assassination in Mexico is unusually low. Indeed, hired assassins in other regions of the world get much more.  A study by the National Institute of Criminology in South Australia showed that the median salary of a hit man in Australia is 9,800 euros  – although it can reach 60,000 per task.  Hit men’s salaries in Spain are also high.  According to government statistics, there are about 40 assassinations done by hit men a year, each one at a price of between 20 and 50,000 euros.

Indeed, developed countries tend to offer better salaries in all professions – not just to hit men. Yet, even when accounting for income differences, Mexican hit men are underpaid.  In other Latin American countries such as Argentina, where the GDP per capita and income inequality levels are similar to those in Mexico, hit men are paid between 2,700 and 4,000 euros per event.  Under any standard, assassination in Mexico is a bargain.

A prime candidate for explaining this phenomenon is the labor market.  Unemployment rates and low wages have been blamed as the principal facilitators of crime.  Economists have shown that labor instability has been substantially associated with crime, especially violent crime.  When interviewed, hit men themselves blame the economy for their actions: “What good is a minimum wage?  A few pesos are not enough for anything […] If they ask me for a death and give me good money, I pay it.  For money I kill whomever.”

It is easy to attribute the attractiveness of crime to a combination of lack of labor qualification, low salaries and high unemployment rates. Indeed, for a young man without formal education and facing difficulties finding a job, criminality may seem attractive. No qualifications are required to become a hired assassin, only boldness, and even such requirement becomes less important over time: The first time, you “see the dead even in the soup”, but afterwards “killing (becomes) a normal thing.”

Becoming a hit man in Mexico is easy.  It takes three months to go from street drug dealer to hired assassin.  According to the Federal Secretariat of Public Safety in Mexico, hit men start their careers normally as informants for drug trafficking organizations, with monthly wages of 150 and 370 euros. Once their loyalty is proven, they are promoted to recruiters.  Afterward, they begin to help with the hits until they become hit men themselves.

However, as bad as the labor market in Mexico may be, a further analysis of the labor conditions of hit men shows that money cannot be what is attracting young Mexicans.  Considering the expected productive time span, being a hit man is actually a very badly paid profession, even when compared with blue collar jobs.  The average professional tenure of a hit man in Mexico is three years. Thus, even if hit men would get to kill on a regular basis, their accumulation of income over time would be very low. Hit men get killed too often.

Furthermore, the relationship between income and crime is not as strong as is commonly thought. There are social groups with relatively low incomes that are rarely incorporated as hired assassins, young men from remote rural areas, for example.  Being a killer requires a particular character that is not generated solely by income conditions. Consider Peru, a country 44 percent poorer than Mexico. Peruvian hit men charge from 7,700 to 20,000 euros depending on the profile of the victim.  Despite the adverse economic conditions in Peru, killing is more expensive than in Mexico.

Then, if poverty and inequality are not the causes behind low Mexican salaries, what is?  The answer is relatively simple: being a hit man includes a series of alternative economic sources, not just the killer’s salary.  Mexican hit men obtain their principal source of income from participating in other illegal businesses like extortion, human trafficking, kidnapping and handling prostitution, not from killing itself.  None of these businesses can be entered without having at least the firearm power that comes with being a hit man.

Kidnapping is particularly profitable.  In 2006 alone, $1.7 million were paid in ransom throughout the national territory. There are several well documented cases of hit men who switch from assassination to kidnapping, and vice versa to make a living.  Arturo Quiñónes, who served as a hired assassin for the Tijuana drug cartel, one of the main criminal organizations in Mexico, became one of the most successful kidnappers after he left the organization.  The well-known kidnapper referred to as the “Ear cutter,” famous for cutting the ears and fingers off his victims to push for higher ransoms, became a hit man for the Gulf Cartel, another important Mexican drug association.

Extortion also creates huge economic gains.  Like El Universal documented: “In Tijuana, hit men charge merchants and businessmen between 380 and 17,800 euros a month in exchange for not burning their businesses, not killing them or their families.”

Other illegal businesses that create high returns for hit men are the stealing of gasoline from the PEMEX pipelines, child pornography, control of prostitution rings and smuggling.  Mexican hit men have proven to be excellent entrepreneurs in crime.  The Zetas – a Mexican drug trafficking organization, originally a group of hired assassins working under the lead of another Mexican cartel – have established agreements with smugglers from whom they demand the rights to the ground for crossing undocumented immigrants in the territory they control.  They charge between 30 and 45 euros per migrant. Recently, Zetas have become even more imposing. They kidnap illegal immigrants, mostly ones coming from Central America that are already disadvantaged from the long trip to the US-Mexican border, and ask them for a small ransom. If they do not have the money to pay, Zetas help them call their family in their home countries to set up a wire transfer. If the money does not come in a reasonable period of time, Zetas kill the immigrants.

From assassin to kingpin

Independently of alternative sources of income via other criminal activities, Mexican hit men are in the business also because they hope to climb the criminal ladder and eventually become kingpins themselves.  Being a paid assassin has proven to be the best criminal profession from which to attract the attention of drug bosses and start a trafficker career. The best assassins end up forming part of the formal structure of the drug trafficking industry, which is a monetary windfall.  ‘El Chapo’ Guzmán, leader of the Sinaloa Cartel, was recognized as the seventh richest Mexican in the world in 2009 by Forbes magazine.  His fortune is estimated to be on par with that of Emilio Azcarraga Jean, owner of the main broadcasting company in Mexico.

Other more structural reasons exist for why salaries of hit men in Mexico are low.  Like Mexican journalist Fernández Menéndez and Ana María Salazar have argued, killing in Mexico is inexpensive because of the uncontrollable flow of illegal arms.  In 2008 alone, 200,000 high power arms, including bazookas, Tommy guns, grenades and hand guns—and three million cartridges — entered Mexico illegally from the US.  A high number of these weapons flow into the hands of drug traffickers as a form of payment for drug sales in the US.  Actually, it is precisely in the Mexican states where the drug trafficking industry is more present that arms are used the most to commit illicit acts.  In Guerrero  — a southern state know for its involvement in marijuana cultivation — almost all crime, including small robberies and other acts, are normally committed with weapons; petty crimes are perpetrated with high caliber arms.

Killing in Mexico is also inexpensive because the possibility of being caught is very low.  Assassinations that are perpetrated by drug trafficking organizations are normally not investigated. Mexican officials dismiss them as cases of gang confrontations, not deserving of the prosecutor’s resources. Yet, even in cases that are investigated, the perpetrators are rarely found.  Of the total reported homicides, only 27.6 percent end up being sentenced, (ICESI 2003) and in states that are highly immune, like Tlaxcala, the sentencing rate is only seven percent.

Thus, once we consider the earnings of the peripheral criminality, the large availability of arms in Mexico and the low probability of being sentenced, the salaries of Mexican hit men are actually high.  Despite appearances, the Mexican hit man is not badly paid.  If the hired assassin is clever enough to enter other criminal spheres and trick the authorities, he can become quite wealthy.

The implications for Mexican public policy are clear.  To just persecute hit men will not reduce their numbers.  The earnings inside the criminal industry are too high and, thus, attractive for young individuals without formal education. If homicides are to be stopped, it will be by increasing sentencing rates and tackling other crimes such as human trafficking, kidnapping and extortion. 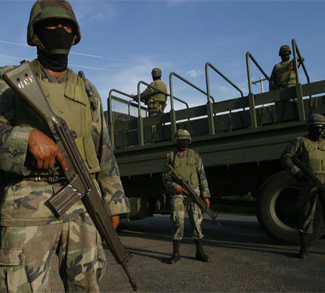