Colombia Looks to NATO and Beyond in Regional Defense 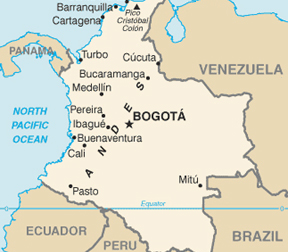 Over the last two years, the Colombian government has given high priority to diplomatic efforts meant to shore up its immediate security situation, actively pursuing bilateral, trilateral and multilateral agreements with various governments in the region and beyond.

Colombia occupies a strategic position in the western hemisphere: it has a large territory connecting North America with the South, and it has enormous shores on both the Atlantic and Pacific coasts. This geostrategic advantage allows Colombia to act as a gate of entry for South America, and its network of sea ports processes a large volume of commodities and other shipments coming in and out of the United States and Europe on a daily basis.

Bogota is also trying to position itself as an important hub in terms of regional defense, boosting its domestic military training and capacity building for fighting drug trafficking networks, terrorism, and other sources of transnational crime. These capacity building programs include military training, and intelligence and technology sharing agreements with various countries such as Costa Rica, Ecuador, Chile, Canada, Israel, the United Kingdom, Spain, France, and Korea. Official working relationships have also been established with the European Union and the North Atlantic Treaty Organization (NATO).

Cooperation with the United States plays a large role in Columbia’s overall security outlook. In addition to a local DEA presence in Bogota, the United States has also supported Colombia in its risk management efforts, the transformation of its armed forces, and the war against drug traffickers and organized crime. Under Washington’s guidance, the Santos government has taken a leading role in the region as a country with a vast experience in matters of security.

Colombia and the United States have also signed an agreement to establish an overall assistance and cooperation plan covering four countries: Guatemala, El Salvador, Honduras and Panamá. In 2013 alone, there have been over 25 training activities that have trained 43 members of the security forces of these Central American countries.

In early 2013, Colombian President Juan Manuel Santos proposed to establish closer military relations between his government and NATO. His public statement, made in early 2013, raised many eyebrows in the upper ranks of the Bolivarian anti- imperialist cluster of Latin American countries, many of whom are also are very vocal in UNASUR. Evo Morales, Bolivia’s president and one of the most outspoken proponents of Bolivarianism, expressed a high level of concern and called Santos’ action a “provocation and a threat” to Bolivarian countries like Bolivia, Ecuador, Venezuela and Nicaragua.

According to Colombian Defense Minister Juan Carlos Pinzón, Bogota “was not looking at an actual membership in NATO, but was merely planning to sign a deal with NATO boosting cooperation in human rights, military justice, and the training of troops.”

For Dr. Odeen Ishmael, Guyana’s Ambassador to Kuwait, “Colombia’s proposed association with NATO has raised genuine concerns. During her June 6 press conference in Quito, Ecuadorian Defense Minister María Fernanda Espinosa, joined by her Brazilian counterpart Celso Amorim, stated that both nations want more information, since they belong to a cooperative area in South America, and it is very important that regional countries discuss these things.”

Despite some regional concerns, the Colombian vice minister of defense was the first ever Colombian high-ranking official to attend NATO’s meeting in Monterrey and the only Latin American official in attendance.

According to Vice Minister Diana Quintero, “[Colombia] has approached NATO in order to be one of its global allies and this invitation is in response to NATO’s goal of sharing good practices and experiences with other countries.” Quintero stated that “NATO is not only a military organization, but it is a community with the best practices in defense budgeting, military doctrine and training.”

On the other hand, Colombian pragmatism is evident in its participation in UNASUR and the South American Defense Council. The Ministry of Defense has participated in the tenth conference of defense ministers of the Americas (CDMA) and has led discussion in relation to information exchange, citizen security training, and it has also held conferences with Interpol and MERCOSUR.

Together with Colombia, Canada has also been an important partner for Central American countries. An integrated security cooperation agreement was signed between both countries, with the objective of strengthening defense capacity for the governments of Guatemala and Honduras in order to combat trans-border and organized crime. Thanks to this program, in 2013 there have been 24 training activities from which 536 members of the armed forces were trained. Additionally, Colombia’s Defense Ministry has signed cooperation agreements with Italy, United States, Germany, Ecuador and Panama.