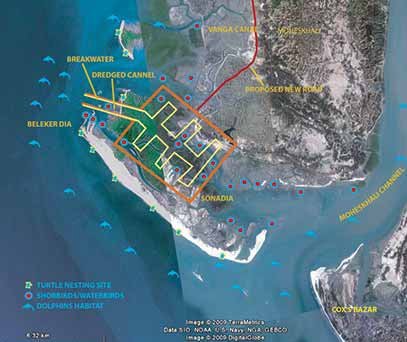 Bangladesh faces a tough challenge in going ahead with plans to set up a deep seaport at Sonadia due to various implications for both national security and regional stability. The naval strategies of China, India, and the United States are on a collision course, as all three naval powers are vying for a strategic presence in the Bay of Bengal. A presence in the Bay is aimed at furthering the strategic objectives of these external powers in the Indian Ocean and the Pacific, including the positioning and counter-positioning of naval fleets, establishing naval bases and surveillance stations, and ensuring accessibility to key ports via joint naval exercises.

The government of Bangladesh recently put off deciding on signing a Memorandum of Understanding (MOU) with the Chinese for the construction of the Sonadia port. This delay in signing off on the contract reflects heightened perceptions of strategic and security risks of late, mainly stemming from the potential strategic use of the Sonadia port by an external power, which could cause serious ripples in Bangladesh’s national security outlook. The awarding of a deep seaport would have serious consequences in terms of Bangladesh’s role in the region, and maybe even globally. Any rash and uncalculated decision on the Sonadia port by the government could undermine national security and regional stability. Ongoing bilateral economic and security cooperation between Bangladesh and China, India, and the United States also risks being adversely affected unless the port is awarded to a neutral third party.

China has evidently gained the confidence of the leadership in Dhaka with prospects of closer economic and defense cooperation, culminating in the announcement of a strategic partnership. However, the momentum of this growing relationship between Dhaka and Beijing suddenly ‘stalled’ due to this recent decision to defer the signing of the MOU on the port, which was supposed to be signed during the recent visit of the prime minister to Beijing but was dropped from the agenda at the very last moment, putting the two countries’ bilateral relations in serious jeopardy.

Chinese delegates have offered a total of $5B for the construction of the Sonadia port. They have expressed an interest in financing, designing, and building the facility, along with being involved in the ongoing operations and maintenance of the port once construction is complete. The main point of disagreement that arose during negotiations with the Bangladesh government revolved around Chinese insistence on retaining the right to ‘design the facility.’  Design of the facility by the Chinese would allow them to control the scope, which could mean future upgrades for strategic use of the Sonadia port via the installation of surveillance equipment and berths for navy warships. A Chinese naval presence at Sonadia would counterpoise the Indian Naval Headquarters of the Eastern Command at Vishakapatnam and pose a threat to regional stability. The China threat is thought to be one of the top priorities of the Modi Government. On his first foreign excursion to Bhutan, Prime Minister Modi entered into an agreement with the Himalayan Kingdom that neither of the neighbors will allow their territories to be used for any purposes inimical to the other – a means of preventing any inroads from the Chinese into the South Asia region. Therefore it is extremely unlikely that India would react favorably to any request from Bangladesh to allow the Chinese entry into the Bay of Bengal.

A Chinese naval presence in the Bay would also go against the national interests of Bangladesh. External trade through the port of Chittagong and the exploration and production of oil and gas from the deep sea blocks in the Bay of Bengal will be halted in the event of an outbreak of hostilities between rival powers. Allowing the PLA Navy access to the Bay of Bengal would also go against the principle of ‘friendship to all, malice to none’ by allowing the use of Bangladeshi territory in a way that is ‘inimical to India.’

The decision not to sign the MOU has disappointed the Chinese side, and it risks producing resentment that could result in the withdrawal of China’s pledges of economic and security assistance. This would effectively deprive Bangladesh of the option of playing the ‘China card,’ which would force it back under the Indian umbrella. Since Bangladesh has desperately tried to keep out of complete surrender to the whims of its neighboring power, perhaps a partnership with the United States may be the only viable alternative. At present, the Pacific Command of the US Navy and the Bangladesh navy are holding joint naval exercises in the Bay of Bengal. Under President Obama’s Asia ‘pivot’ policy, the US Navy plans to relocate about 60 percent of its naval assets to the region. This would allow the United States to use the Bay of Bengal as a second theater in containing Chinese expansion beyond Myanmar. To this end, access to the Chittagong port and the Bay of Bengal would provide an excellent strategic fit for the US Navy.

A convergence of interests between a global superpower and a smaller emergent economy in South Asia could make for a mutually beneficial security partnership. US naval ships operating in the Pacific and the Indian Ocean would find it convenient to use the port facilities in Chittagong for repair and refurbishment, in addition to the possible policing of the Bay of Bengal. Assurances from the United States with respect to Bangladesh’s security dilemma could come after the Hasina regime demonstrates its willingness to reconcile with the opposition and bolster the country’s democratic credentials.

The US Navy would be perfect for the role of a balancer in the Bay of Bengal, fending off the dangers of Chinese expansionism and Indian dominance.  Bangladesh can accept any one of a range of other offers for financing a deep seaport on the Bay of Bengal, whether from the Norwegians, the United Arab Emirates (UAE), Japan, and/or a consortium from Europe. And any option for the strategic use of a commercial hub at Sonadia should be off the table on the grounds of national security.