The Syrian civil war has been completely lost in the quagmire that is ISIS and the wider problems stemming from Iraq and the war waged upon it by President Bush and the neoconservative establishment. The dangers of meddling in Iraq were clear to anyone who had read even a few pages of modern Middle Eastern history, but few in Western power circles were honest enough to question the policy and call on their governments to think twice before meddling in Middle Eastern affairs.

Iraq’s straggling reconciliation and seemingly permanent state of crisis failed to discourage the West – and other governments that should have known better (Turkey, Saudi Arabia, and Qatar to name three) – from interfering in the wave of protests that broke out in Syria shortly after the revolts of Tunisia, Libya, and Egypt had reached a mature point coined as the ‘Arab Spring’ of 2011. The media interpreted the coincidence of the timing of the Syrian protests as an expression of the desire for democracy. Regional and world powers, meanwhile, saw an opportunity to change the Baathist government that had ruled in Damascus for almost 50 years, skillfully navigating through many traps to maintain a degree of independence, and bring Syria into their ‘sphere of influence.’

Little attention was given to the more expert analyses that the Syrian ‘awakening’ never actually happened; democratic ambitions were dormant then and remain ever more lethargic today. Much like Tunisia, the original impetus for the protest came from farmers looking for compensation and improved water supply, especially in the southern regions – and the town of Dara’a in particular – that had suffered intense periods of drought for at least three seasons. The Syrian leadership made a significant mistake: it used hardline methods against the protesters rather than suffocating the issue with some good old fashioned largesse (which could have been limited to infrastructure improvements in Dara’a or inviting a few protesters to the presidential palace to meet the president in an atmosphere of reconciliation).

In Tunisia, the protests also started in an area affected by drought. However, close ties between the European Union and the Ben Ali dictatorship, cemented through intense economic cooperation, tourism, and migration, kept the EU at bay. The United States had relatively few ambitions in the Maghreb; and Tunisia does not border Israel – in fact, bilateral relations were relatively good. The Tunisian protest grew organically, following its own tempo rather than one tuned by foreign interference. President Ben Ali himself, moreover, never received due credit for realizing that his time was up such that on January 14, 2011, he left Tunisia to seek exile (surely encouraged by the secret police and the armed forces), sparing his people from a prolonged conflict. Tunisia, unlike Syria, has a rather uniform ethnic makeup in the context of Arab states. It is 99% Sunni Muslim, featuring a well-integrated Berber population, and held together, unlike many Islamic states, by a well-rooted tradition of secularism and strong institutions. Ben Ali could leave knowing that there were few chances of a civil war mutating into an ethnic or religious conflict while Tunisia’s main and best organized Islamist expression, al-Nahda, is dominated by the most liberal wing of the Muslim Brotherhood under the leadership of Rashid Ghannouchi. Syria, meanwhile, has endured ethnic and religious sectarianism and the al-Assads, like many other dictators in the Arab world, have proven to be adept at balancing divisions (if by force) in order to establish the kind of stability that allows a country to grow and even develop.

The Syrian civil war, with its causes and eventual outcome, is being largely ignored. World attention is now concentrating on the Frankenstein like side-effects of the Iraq war – Islamic State (IS or ISIS) – and its spillover into the fertile anarchy of Syria. The Assad presidency, whose dire predictions of chaos to foreign meddlers have become too embarrassing for the latter to concede, is now but a footnote on the issue of regional terrorism. The West wonders how it could have come to this; how many of its youth have become drawn to the struggle in Syria (and Iraq), ignoring the causes and their tremendous responsibility for the current state of affairs.

For this reason alone, Bashar al-Assad and the Baathist party in Damascus are worthy of consideration. Indeed, it is time for al-Assad to be rehabilitated and included in the process of resolving – if such a verb is even legitimate given the extent of the anarchy – the problem of ISIS and the Syrian civil war itself. That fight has been stolen from him – Western, Saudi, and Qatari-funded foreigners rather than native Syrians have taken over and they have made the very kind of progress in Syria that the West claims to have been fighting since the 9/11 attacks in the United States. The rebels (at least those that have any power and influence) are motivated not by democracy but by the ultimate installation of an Islamic state.

Many media pundits should consider Hillary Clinton’s statement when she visited Jordan two years ago and, looking over at Syria from Mt. Nebo, proclaimed like a reincarnation of Col. T.E. Lawrence and General Allenby that “Assad must go.” King Abdallah of Jordan, who has found his sense of leadership and royal legitimacy through his country’s new war against ISIS, is likely very grateful that President al-Assad ignored Ms. Clinton’s vacation suggestions, staying on to contain the Islamist tide from spilling over to Amman. Syria is not Tunisia, and al-Assad is not Ben Ali.

It is not a stretch to suggest that had al-Assad gone into exile, by now the Caliphate would be based in Damascus rather than the middle of nowhere. 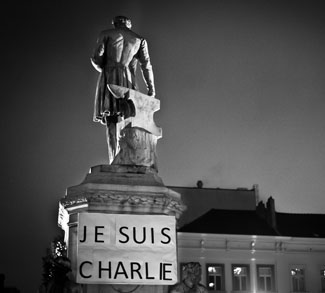