News that the Syrian Democratic Forces (SDF) have driven Islamic State (IS) fighters to the country’s eastern reaches shows that the tide is finally turning against the extremists. While it’s estimated that IS still has thousands of fighters at large, the Kurdish-led SDF has, with US support, gradually eroded the last urban pocket of IS-held territory in the region, close to the border with neighboring Iraq.

But although the American-led coalition has hailed the recent capture of the town of Hajin as evidence that the conflict is entering its ‘end days,’ it’s important to remember that the real fight – that of rebuilding a land and a people torn apart by years of warfare – is only just beginning.

Iraq is still counting the costs

Indeed, one year after the defeat of Islamic State in Iraq, the country continues to grapple with the poisonous legacy left by the terrorist group. This month, Iraq is marking the first anniversary of its victory over IS, following a bitter three-year campaign that saw the death of tens of thousands of its people and the displacement of hundreds of thousands more.

In a bid to re-establish a sense of normality, as well as to fend off protests over alleged corruption and the failure to deliver adequate public services, the government declared a national holiday, with Prime Minister Adel Abdul-Mahdi encouraging citizens to celebrate the country’s triumph over the ‘enemies of life, dignity, freedom and peace.’ It has also begun reopening sections of its heavily guarded ‘Green Zone’ – home to key government offices and foreign embassies – an area that had previously been shrouded in blast walls and barbed wire.

Government efforts notwithstanding, Iraq remains badly affected by the violent rule of Islamic State. According to the Norwegian Refugee Council, more than 1.8 million Iraqis are still displaced, with most unable to return to homes that are damaged or destroyed, while 8 million more need humanitarian aid, and thousands of children fathered by IS militants have been left in limbo without a national identity. Meanwhile, IS forces and sympathizers continue to carry out attacks on Iraqi targets – as well as further afield, as evidenced by the recent shootings in Strasbourg, France.

Those communities recovering from the devastation of war are struggling to rebuild the infrastructure that will allow them to look to the future. Raqqa, the former de facto capital of the Islamic State ‘caliphate’ in Syria, had around 80 percent of its infrastructure destroyed during the liberation battle in 2017, including the majority of bridges that provide essential links to other cities.

Major projects are ongoing to re-establish water and sewage supplies, as well as to replace schools and hospitals. Yet it’s a massive task and it’s hard to see how more ambitious projects, including tackling the power sector, can be addressed in the short term. Away from the cities, farmers and people living in rural communities also need help to rebuild their lives but assistance is in short supply: the US recently announced a $230 million cut in so-called ‘stabilization’ funding to northeast Syria, instead focusing its resources on the recovery of Raqqa.

A living legacy of forced occupation

Infrastructure problems aside, the trauma in the bodies and minds of the people who were forced to live in territory occupied by Islamic State is still very real. Many others are grappling with the effects of rape and abuse by IS militants. It was a legacy evoked by Nobel Peace Prize winner, Nadia Murad, in remarks last weekend at the Doha Forum, a global platform for dialogue hosted by the Gulf state of Qatar. Speaking before conference attendees, Murad called for the protection of women from her Yazidi minority group until IS leaders are “brought to the international courts.”

Her remarks came only days after she had returned to her village in the Sinjar region, where she promised to use her prize money to build a hospital. In August 2014, this village had turned into a horror scene following two weeks’ siege by IS forces. Throughout 2014, the extremist group had attacked towns throughout Sinjar, with the intention of ethnically cleansing the country of its minority Yazidi population. Thousands of Yazidi men were killed, while the Yazidi women – including Murad – were abducted and held as sex slaves by the terror group. Murad managed to escape her captors and was later able to tell her story from a refugee camp, but it’s thought that around 3,200 women are still in IS hands. Five years later, most of the 500,000 Yazidi people remain displaced, with some living rough at the top of Mount Sinjar, apparently forgotten by the rest of the world.

The co-recipient of the 2018 Nobel Peace Prize, Murad is a leading advocate for survivors of genocide and sexual violence. Her work involves raising awareness about Islamic State’s genocidal campaign against her people in the international community, to secure support for its victims and to help rebuild the Yazidi homeland. She was instrumental in persuading the UN to open an investigation into the war crimes committed by IS in Iraq.

Speaking at the Doha Forum, Murad expressed a simple, yet heartfelt, wish: ‘I hope, as a matter of fact, the international community will help the Yazidis come back to their villages and get back their dignity… I dream about returning to Sinjar and living a noble life.’

Planning for the long term

It’s a wish echoed by communities across the region. While news of SDF gains in Hajin is broadly welcomed as evidence of the waning influence of extremist forces in Syria, the destruction wrought by years of conflict in the region means there’s a long way to go before its people can regain and sense of lasting security, address ethnological tensions, and begin to plan for a peaceful future.

Long-term stabilization must now be the goal, with the emphasis not only on tackling a broken infrastructure but on establishing support programs that will enable ordinary people to rebuild their lives and families. 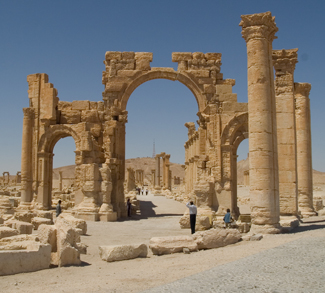