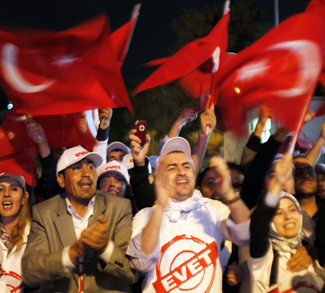 If one thing is to be taken from the newly-passed package of Turkish constitutional reforms, it’s that the country is transitioning away from the military coups of the past and striving to join the EU; not that newly gained powers over the judiciary will eventually spell the demise of Turkish secularism.

The reform package, which passed with a comfortable 58% voter approval, contains several items that bode well for Turkey’s case for EU membership. They include stronger gender equality, recognition of a right to privacy, limits on travel bans, and new labor rights. Despite support from Western governments over these amendments, the international media has largely focused on the executive branch’s new powers over the judiciary. The argument goes that Prime Minister Erdogan’s AK Parti will now be able to appoint activist judges and slowly chip away at the secular nature of Turkish society.

Such an argument overlooks the fact that Ataturk still enjoys a cult-like status in Turkey and support for secular government institutions is extremely strong.  Furthermore, a move away from a secular society would jeopardize Turkey’s ascension into the EU; a goal of Prime Minister Erdogan.  For now and the foreseeable future, Turkey will go on being a secular country.

An editorial in the Guardian highlights the democratic strides being made by Turkey:

“A small revolution is taking place in a country whose history has been plagued by repression and army-backed coups, and it is happening democratically and bloodlessly. A system in which generals and judges held power, toppling four governments since 1960, is being rolled back with democratic consent. The outcome of the referendum boosted markets, as the result showed that the AKP now has good prospects in winning a third term.”

The Israeli newspaper Haaretz takes the opposite view, arguing that last week’s reforms are the beginning of the end for Turkish secularism:

“The reforms passed yesterday overturn eight decades of government-touted secular ideology, instilling instead a new political creed that could rightfully be termed Erdoganism. And a leader doesn’t have an “ism” attached to his name simply by toeing his predecessors’ line.”