Summary
This report is about American and British involvement in the Afghan drug trade in opium, focusing on the history of such involvement, and the nature of the drug trade since the 2001 occupation of Afghanistan. Today, Afghanistan supplies “more than 90 per cent of the world’s illicit opium, from which heroin is made,”[1] so who’s profiting from the trade?
Analysis
The Anglo-Americans and the Origins of the Taliban

In 1998, Zbigniew Brzezinski, Jimmy Carter’s National Security Adviser, said in an interview with a French publication, Le Nouvel Observateur, that the US intervention in the Afghan-Soviet war did not begin in the 1980s, but that, “it was July 3, 1979 that President Carter signed the first directive for secret aid to the opponents of the pro-Soviet regime in Kabul,” which precipitated the Soviet invasion into Afghanistan.[2] From the Soviet invasion, a bloody ten-year war followed.

Amazingly, “Before 1979 Pakistan and Afghanistan exported very little heroin to the West,”[3] but by 1981, “trucks from the Pakistan army’s National Logistics Cell arriving with CIA arms from Karachi often returned loaded with heroin – protected by ISI [Pakistan’s internal security service] papers freeing them from police search.”[4] This change occurred in 1981 when then CIA Director William Casey, Prince Turki bin Faisal of Saudi intelligence and the ISI worked together to create a foreign legion of jihadi Muslims or so-called Arab Afghans. More than 100,000 Islamic militants were trained in Pakistan between 1986 and 1992 in camps overseen by the CIA and [British] MI6. The SAS [British special forces] trained future Al-Qaida and Taliban fighters in bomb-making and other black arts” while their leaders were trained at a CIA camp in Virginia.[5] Further, “CIA aid was funneled through [Pakistani President] General Zia and the ISI in Pakistan.”[6]

In the mid-1990s, an obscure group of “Pashtun country folk” had become a powerful military and political force in Afghanistan, known as the Taliban.[7] During that same time the Taliban acquired contacts with the ISI,[8] often referred to as Pakistan’s “shadow government.” In 1995, the ISI was actively aiding the Taliban in Afghanistan’s civil war against the warlords that controlled the country.[9] In addition, just as in the Afghan war against the Soviet Union in the previous decade, the ISI looked to Saudi intelligence to provide the funding for the Taliban, and the ties between the ISI and Saudi intelligence grew much closer.[10] The Taliban’s rise to power in Afghanistan was also aided by the CIA, which worked with the Pakistani ISI.[11]

A few years after the Taliban came to power they began a campaign to eradicate Afghanistan’s opium crops, and “The success of Afghanistan’s 2000 drug eradication program under the Taliban government was recognized by the United Nations” as a monumental feat, in that “no other country was able to implement a comparable program.”[12] In October of 2001, the UN acknowledged that the Taliban reduced opium production in Afghanistan from 3300 tons in 2000 to 185 tons in 2001.[13]

In June of 2001, a few months before 9/11, it was reported that a “recent gift of $43 million to the Taliban rulers of Afghanistan” was announced “by Secretary of State Colin Powell, in addition to other recent aid, [which] made the United States the main sponsor of the Taliban.”[14]

Drug trafficking is the largest global commodity in profits after the oil and arms trade, consequently, “immediately following the October 2001 invasion opium markets were restored. Opium prices spiraled. By early 2002, the domestic price of opium in Afghanistan (in dollars/kg) was almost 10 times higher than in 2000.”[15] The Anglo-American invasion of Afghanistan successfully restored the drug trade. The Guardian recently reported that, “In 2007 Afghanistan had more land growing drugs than Colombia, Bolivia and Peru combined.”[16].

In 2005 it was reported by the Independent that Afghanistan’s Interior Minister had resigned, “amid reports he had quit because of the involvement of senior government officials in the illegal drug trade.”  He had “been outspoken over the involvement of officials in the drug trade and is believed to have had differences with President Karzai over the appointment of Provincial officials.”[17] In 2006, the Independent reported that, “British intelligence officers and military commanders accused the US of undermining British policies in Iraq and Afghanistan, after the sacking of a key British ally in the Afghan province of Helmand.” The British “blamed pressure from the CIA for President Hamid Karzai’s decision to dismiss Mohammed Daud as governor of Helmand.” Mr. Daud “had survived several Taliban assassination attempts, was seen as a key player in Britain’s anti-drugs campaign in Helmand,” and was fired after Hamid Karzai, Afghanistan’s President, “listened to advice from ‘other powerful Western players’.”[18]

Former British Ambassador to Uzbekistan, Craig Murray, wrote in a 2007 article in the UK Daily Mail, that what has been achieved in Afghanistan is “the highest harvests of opium the world has ever seen.”[19] Murray elaborated that, “Our economic achievement in Afghanistan goes well beyond the simple production of raw opium. In fact Afghanistan no longer exports much raw opium at all. It has succeeded in what our international aid efforts urge every developing country to do. Afghanistan has gone into manufacturing and ‘value-added’ operations.” This means that Afghanistan “now exports not opium, but heroin. Opium is converted into heroin on an industrial scale, not in kitchens but in factories. Millions of gallons of the chemicals needed for this process are shipped into Afghanistan by tanker. The tankers and bulk opium lorries on the way to the factories share the roads, improved by American aid, with NATO troops.” Murray explains that this was able to happen because “the four largest players in the heroin business are all senior members of the Afghan government.” Murray stated that, “Our only real achievement to date is falling street prices for heroin in London.”[20]

In 2002, former Additional Secretary in the Cabinet Secretariat of the Government of India wrote that, in regard to the failure to combat the rise in opium production, “this marked lack of success in the heroin front is due to the fact that the Central Intelligence Agency (CIA) of the USA, which encouraged these heroin barons during the Afghan war of the 1980s in order to spread heroin-addiction amongst the Soviet troops, is now using them in its search for bin Laden and other surviving leaders of the Al Qaeda.”[21]

The Hindu reported in 2008 that, “90 per cent of the heroin sold in Russia comes from Afghanistan,” and Putin was quoted as saying, “Unfortunately, they (NATO) are doing nothing to reduce the narcotic threat from Afghanistan even a tiny bit,” and that the coalition forces were “sitting back and watching caravans haul drugs across Afghanistan to the former Soviet Union and Europe.” The article then reported that, “according to unconfirmed reports the U.S. military transport aviation is used for the delivery of drugs from Afghanistan to the American airbases, Ganci in Kyrgyzstan and Incirlik in Turkey,” and that, “It has been reported earlier that the CIA is involved in Afghanistan’s opium production, or is at least protecting it.” One Russian journalist quoted anonymous Afghan officials as saying, “85 per cent of all drugs produced in southern and southeastern provinces are shipped abroad by U.S. aviation.”[22]

The British and the Taliban

The Independent reported in 2008 that “Britain planned to build a Taliban training camp for 2,000 fighters in southern Afghanistan, as part of a top-secret deal to make them swap sides. The plans were discovered on a memory stick seized by Afghan secret police in December.” Further, “The camp would provide military training for 1,800 ordinary Taliban fighters and 200 low-level commanders.”[23]

The article explained that, “the Afghans feared the British were training a militia with no loyalty to the central government. Intercepted Taliban communications suggested they thought the British were trying to help them.” The article further reported that, the program was bankrolled by the British,” and that, “the memory stick revealed that $125,000 (£64,000) had been spent on preparing the camp and a further $200,000 was earmarked to run it in 2008,” which “sparked allegations that British agents were paying the Taliban.” Further, “the Afghan government took issue with plans to provide military training to turn the insurgents into a defence force.” On top of that, “the memory stick revealed plans to train the Taliban to use secure satellite phones, so they could communicate directly with UK officials.” “Officially, the British embassy remains tight-lipped, fuelling speculation that the plan may have been part of a wider clandestine operation.”[24]

Who Profits from the Drug Trade?

Michel Chossudovsky describes the heroin trade as a “hierarchy of prices,” with the drug’s street price, (what it is sold for in largely Western cities around the world), is 80 to 100 times the price paid to the farmers who cultivate it in Afghanistan.[25] The IMF reported that in the late 1990s, money laundering accounted for 2-5% of the world’s GDP, and that a large percentage of the 590 billion to 1.5 trillion dollars in annual money laundering is “directly linked to the trade in narcotics.” This lucrative trade in narcotics produces profits which are “laundered in the numerous offshore banking havens in Switzerland, Luxembourg, the British Channel Islands, the Cayman Islands and some 50 other locations around the globe.” These offshore havens “are controlled by major Western banks and financial institutions” which “have a vested interest in maintaining and sustaining the drug trade.”[26]

An example of the interest of Wall Street and London bankers in the international drug trade, we can look to Colombia and the FARC rebel group. In “1999, NYSE [New York Stock Exchange] Chairman Dick Grasso traveled to Colombia and met with the leader of the FARC rebels controlling the southern third of the country.” “Grasso had asked the Colombian rebels to invest their profits in Wall Street.”[27] The Associated Press reported that Grasso told the rebel leader to, “make peace and expect great economic benefits from global investors,” and invited the rebel leader to visit Wall Street.[28] To allow for drug investment in Western financial institutions, “major banks like Citigroup, Bank of America, Morgan Stanley, Deutsche Bank, and JPMorgan Chase all offer private client services for the very wealthy with very few questions asked.”[29]

It not surprising that opioid and opiate medication abuse is on the rise because people can easily get such drugs online without a prescription, not to mention the fact that heroin continues to flow into the country despite the War on Drugs.

[27] Michael C. Ruppert, Crossing the Rubicon: The Decline of the American Empire at the End of the Age of Oil. New Society Publishers: Canada, 2004: Page 57 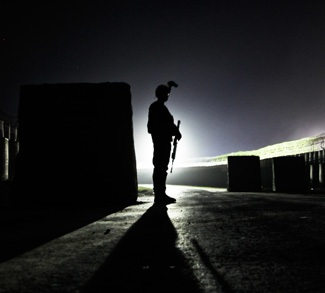