A Lost Decade: The Actors and Geopolitics behind the Libyan Civil War

Following the death of Muammar Qaddafi in 2011, Libya has struggled to rebuild state institutions and maintain order and stability. The transitional government ceded authority to the General National Congress (GNC) in 2012, but it encountered numerous challenges over the next two years, including the spread of Islamist groups, a major attack on the U.S. consulate in Benghazi, and internal fragmentation. As time progressed, the GNC increasingly became incapable of maintaining order in the country. By 2014, support for the GNC was at an all-time low. In May, 2014 former General Khalifa Haftar and his Libyan National Army (LNA) launched ‘Operation Dignity.’ Haftar demanded the dissolution of the GNC and targeted Islamist groups throughout eastern Libya. In response, Islamist militants formed their own coalition – the Libyan Dawn. Fighting between the LNA and Libyan Dawn thus broke out across east and west Libya.

Amidst the violence, new parliamentary elections were held to resolve the crisis. The resulting parliament became known as the House of Representatives (HOR), and was dominated by anti-Islamist forces loosely affiliated with Haftar. The elections failed to resolve the underlying issues and voter turnout was extremely low. Members of the GNC refused to recognize the transition and continued to present themselves as the legitimate government of Libya. In July of 2014, forces loyal to the GNC initiated Operation Dawn to push back on Haftar’s military gains. By the summer of 2015, the conflict had reached a stalemate, and Libya was a country being fought over by two rival governments.

International attempts at mediating the conflict culminated in the political agreement of December 2015. Signed in Skhriat, Morocco, the agreement laid out a roadmap for resolving Libya’s many political and military dilemmas. The idea of a caretaker government that could accommodate both parliaments, restore political order, and organize Libya’s many militias into a central entity was stipulated in the text. It also created a presidency council, led by Fayez- al Sarraj, which was tasked with creating a new unity government and advisory council of ex-GNC members. Under the agreement, the HOR would continue as the sole legislative body under the aegis of the Government of National Accord (GNA).

As soon as 2016, the provisions of the peace agreement began to fail. Members of the HOR refused to acknowledge GNA ministerial positions and continued to consider themselves as the sole governing body of Libya. Sarraj’s reliance on Islamist militias stoked fears in the east of another western-backed Tripoli government supporting radical militants. The agreement failed to adequately address the role of extremist militias supported by GNA members, and certain military commanders such as Haftar within the unity government. Divisions between tribes, businessmen, and commanders also led to the failure of the accord. The GNA, under the stipulations of the agreement, would be recognized internationally as the legitimate government of Libya, in spite of the refusal on the part of the HOR to dissolve itself.

Libya once again became geographically divided between two rival governments located in the east and west.

Libya’s National Oil Corporation (NOC), the principal body for facilitating Libya’s oil production and exportation, remained aligned with the GNA in Tripoli. The Central Bank, Libya’s foremost financial institution, additionally aligned with the GNA. To deprive the Government of National Accord of its critical funding, Haftar initiated a series of assaults beginning in September of 2016 aimed at capturing oil fields and ports. Haftar’s seizure of Libya’s gulf crescent and southern oil fields constricted the GNA monetarily, and he attempted to open his own eastern branches of the NOC and Central Bank. Continued control of critical oil infrastructure presented the LNA with a major political bargaining chip. Galvanized by his recent military success, Haftar felt he could retake Tripoli from the GNA. This dynamic brings us to the present, but to fully understand what is currently happening in Libya, knowledge of all the actors involved – and their foreign patrons – is necessary.

The Libyan National Army (LNA), which is backed by the HOR, is led by Field Marshall Khalifa Haftar, a former Qaddafist and Libyan Military commander who defected and fled to the United States after his capture by Chaldean forces in the 1980s. Haftar’s Operation Dignity, launched in 2014, was successful in reducing Islamist influence and garnered him considerable support from former Qaddafists, secularists, and several regional and international actors. Haftar’s anti-Islamist and secular stance has garnered him support from the United Arab Emirates, Egypt, France, Jordan, Sudan, Russia, and Saudi Arabia. However, among these, Haftar’s most notable patrons are Egypt, the UAE, Russia, and France. Egypt and the UAE share an anti-Islamist foreign policy and Haftar’s aversion to the Muslim Brotherhood and its affiliated groups make him a natural ally.

However, last May US Africa Command (AFRICOM) tweeted imagery confirming the deployment of up to 14 MIG-29s and Su-24s from the Hmenienm Air base in Syria, indicating Russia may be exploring a more direct form of intervention. Moscow has vehemently denied any deployment of the Russian air force (Vozdushno-Kosmicheskiye Sily—VKS) to Libya and Russian officials claim that if any Mig-29s or SU-24s are in Libya, they are not VKS assets and could have originated anywhere as they are exported worldwide. Although the deployment of Russian military aircraft may serve as an indicator for future military deployments or construction of military bases, the use of these aircraft has done little to change the situation on the ground.

The last of Haftar’s major patrons is France. France ostensibly supports the internationally-recognized GNA government and the peace process. However, since 2015, it has quietly assisted in building Haftar into a strongman to bring order to a volatile Libya. While never fully admitting to supplying the LNA with logistical support, the death of three French soldiers in a helicopter crash in 2016, represents a reminder of the French presence in Libya. After the 2011 Arab Uprisings, the dominant perception among French policymakers was that only military strongman can control Islamist insurgencies and mass migration. Policymakers in Paris believe that Haftar is the only actor capable of imposing order on the myriad of Islamist groups operating in Libya’s ungoverned spaces.

France connects this regional struggle to a larger fight against the Islamist insurgency in the Sahel, which threatens the fragile governments of Mali, Chad, and Niger, all of which are participants in the French Operation Burkhane. Arms deals with Egypt and the UAE continue to proliferate and have generated billions of dollars for the European nation, which should remove any doubts over who France truly supports in the conflict. The calibrated support from these patrons has enabled Haftar to push westward and initiate operations to seize southern Libya, where key gas installations are located.

While the international community generally backs the GNA as the internationally-recognized government, Tripoli has few heavily-invested supporters. Turkey and Qatar are the GNA’s primary proponents. The presence of Muslim Brotherhood elements and Turco-Libyans within the GNA is primarily responsible for Turkish and Qatari receptivity to the Tripoli government. Qatar plays a less aggressive regional role since the 2013 Egyptian coup, but it still financially supports political Islamists throughout the Middle East. Turkey views Libya as a critical component to its regional grand strategy. The GNA is a Turkish ally neighboring its foremost competitor – Egypt. Additionally, Libya possesses offshore natural gas deposits that Turkey seeks to exploit amid ongoing maritime disputes with Greece. Turkey has signed a bi-lateral economic agreement with the GNA that stipulates access to offshore drilling, in return for military assistance. Turkey’s growing support for the government in Tripoli is driven by Ankara’s desire to secure its energy supplies and extend its access to Mediterranean gas fields.

On April 4, 2019, Haftar and the LNA began their Western Libya Operation, with the goal of seizing Tripoli and expelling the GNA. The LNA, with the support of its various patrons, swept decisively through western Libya and reached the outskirts of Tripoli. Any quick capture of the capital was abruptly halted in April 2020, when Turkey intensified its support for the GNA. Beginning in late April, Turkey decided to deploy naval, air, and ground expeditionary assets to Libya.

Turkish Bayraktar TB2 drones, Hisar air defense systems, armored vehicles, mercenaries, and naval bombardments have been crucial in preventing Haftar from capturing Tripoli and regaining the strategic initiative.  The seizure of the strategic al-Watiya Air Base on May 18, and the loss of UAE- supplied, Russian-made Panstir S-1 defense systems, was a major blow to Haftar’s strategic presence in the west. The al-Watiya Air base, under Haftar’s control since 2014, had been essential for conducting airstrikes against GNA positions surrounding Tripoli.

Shortly after the fall of al-Waitya air base, GNA forces took the remaining LNA strongholds in Tripolitania, including Zintan, Bani Walid, Zwara, and Mitiga Airport. On June 5, the GNA captured the city of Tarhuna, Haftar’s final stronghold in western Libya, officially ending his 14-month offensive.  Forced to withdraw, the LNA has been pushed back to the Mediterranean city of Sirte as galvanized GNA forces move east with Turkish support. Eager to capitalize on their momentum, GNA forces began conducting attacks on Sirte, which is considered the gateway to Libya’s oil export terminals. The initial assault was unsuccessful due to the use of LNA unmanned aerial vehicles (UAVS), airstrikes, and minefields to the west of the city. Currently, the battle lines have solidified around Sirte as GNA forces are positioned approximately 25 km to the west of the city center. Several days after Haftar’s withdrawal, the field marshal flew to Cairo to accept an Egyptian sponsored ceasefire alongside Egypt’s President Fateh el Sisi and HOR Parliament Speaker Aguila Saleh. However, neither party could come to an agreement and the conflict rages on.

On July 9th, the Egyptian Armed Forces began their Resolve 2020 exercises involving land, air, and naval forces deployed near the Libyan border. Egypt’s exercises coincide with Turkey’s announcement of naval exercises off the Libyan coast, codenamed Naftex. The Turkish exercise will occur in international waters, utilizing 17 aircraft and eight naval vessels, and it’s intended to demonstrate Turkey’s ability to control the region’s air and sea zones. Turkish and Egyptian military exercises near the Libyan border diminish the likelihood of a ceasefire, as both parties seem ready to intervene should escalations continue. Since the collapse of the LNA offensive on Tripoli, Turkey has continued to supply the GNA with advanced weapons and equipment with the aim of taking the city of Sirte, and Libya’s oil crescent along with it. Both actors and their proxies have issued red-line declarations, which state that neither party will accept a ceasefire unless they control Sirte.  The military exercises are intended to deter competitors from further intervening in the conflict, while publicly displaying their ongoing commitment to their proxies.

Of course, such military commitments will only serve to prolong instability in this failed state.

On July 15, the Tobruk-based HOR approved a motion authorizing Egypt to intervene militarily to counter Turkey and its support for the GNA. On Tuesday, the United Arab Emirates, one of Haftar’s primary supporters, called for an immediate ceasefire and inter-Libyan dialogue. The UAE’s statement follows the Turkish Foreign Defense Minister’s proclamation dismissing any prospects for a ceasefire while Sirte remains under LNA control.  On July 20, the Egyptian parliament granted Egyptian President Sisi the power to intervene in Libya should he deem it necessary.

The world watches as the Libyan civil war reaches a potential turning point. Maintaining an advantage in the conflict is predicated on the possession of Sirte. Regional tensions between Egypt and Turkey have never been higher. Direct conflict between two regional powers would generate a humanitarian crisis and end all possibility for a political solution to the conflict. 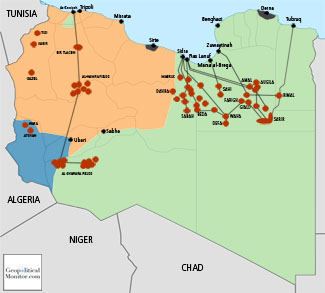