China President Xi Jinping is imposing upon China an imperial rule with a rigid Maoist ideology that extends beyond China’s borders.

What Xi Jinping learned from the days of the Cultural Revolution was to be more Communist than Marx and more Communist Party than Mao. It is that ruthless pragmatist who has risen to become the Chairman of the Communist Party of China. Far more, he has been anointed with the honorific of “The Revered Fatherly Leader.”  Only Mao had been given such a standing. It means that Xi’s words are never to be questioned.

The anti-corruption purge that started as soon as Xi acquired his offices in 2012 is sweeping away any opposition.  Xi is appointing to important positions men who survived the Cultural Revolution, where they learned the art of submission to authority.

He is known as the “chairman of everything,” because he has been gathering into his hands the important levers of power.  He is the General Secretary of the Chinese Communist Party, Chairman of the Central Military Commission, a Member of the Politburo Standing Committee, Chairman of the National Security Committee, Head of the Central Leading Group for Foreign Affairs and National Security, Head of the Central Leading Group for Taiwan Affairs, Commander in Chief of the Joint Operations Command Center of the People’s Liberation Army, and more.

During the National People’s Congress in October of 2017, it was made plain by his by failing to mention his successor in five years that Xi Jinping will remain the chairman of the Communist Party for as long as he chooses; and the NPC has granted him a limitless reign. The lesson learned from the collapse of the Soviet Union was the need to have the party retain absolute control.  It is extending that control beyond the borders of China to university campuses around the world where Chinese students are being forced into party cells to assure their continued loyalty.  If they waver from their dedication to the Party, they will answer for it upon their return.  They are expected to report any of their colleagues who deviate from the Party doctrine.

Wherever Chinese people go in the world, they cannot forget that Xi is the leader of the party, the party is the ruler of China, and China will dominate the world with the ancient civilization returning to its former prominence as the Middle Kingdom. When he delivers his lengthy speeches, they are decorated by references drawn straight out of the glorious sixteenth century.  He pledges to accomplish the building of national prosperity and global domination by the one hundredth anniversary of the Communist Revolution in 1949. As China goes through the third phase of its transformation from the chaos of a century of humiliation by the foreigners, through the rigid Communist rule under Mao, to the reforms of Deng Xiaoping that raised China from isolation and poverty to the second-largest economy in the world, and finally to the merging of Maoist orthodoxy with Xi Jinping’s market socialism, China must remain Chinese. The restoration of the Silk Road and the development of a modern military with global reach is a part of the greater plan to propagate the spread of Chinese technology and credit control over the country’s weaker neighbors.

China will need a strong leader without the distraction of changing leadership. The governing circles need continuity. This will require a modern emperor to have an appropriate ideology.  The new emperor will issue the guidelines and the people will follow. They will be prosperous so long as they obey. There will be no compromise. Absolute rulers must rule absolutely.

Donald Trump has confronted the new Chinese emperor on multiple fronts.  By raising the diplomatic standing of Taiwan that Beijing considers to be an internal matter, by challenging Chinese control over islands in the South China Sea that they have rewritten history to support their claims, and by imposing tariffs upon fifty billion dollars of Chinese products, Donald J. Trump has challenged Xi Jinping to respond or submit to his superior strength. Xi must defeat what is taken as a threat, because the newly anointed ruler has no choice. To do otherwise will strengthen his opposition within the party.

The China’s ambassador to the U.S. Cui Tiankai warned that China, which already holds nineteen percent of U.S. Treasury bonds, will reduce purchases at a time of an increasing U.S. budget deficit.  If the higher interest rates that follow do not curb Donald Trump’s challenges, there are other possibilities.

Already, China has nullified any trade agreements decided during recent negotiations and has retaliated by imposing tariffs of a similar level against American products.

During May, the Chinese Navy conducted live fire exercises in the Taiwan Straits and Chinese bombers circumnavigated Taiwan.  It was a warning to the Taiwanese to curb their drift toward independence. It is also a warning to Washington: Are Americans ready to die for some far-off island?

The same question can be asked about the numerous islands in the South China Sea that China has created or seized.  Washington has been sending naval vessels through the disputed waters to defy Beijing. In spite of the American protests, China continues to turn the islands into forward military positions.  Is Donald Trump prepared to drive the Chinese from the islands by military force or will he settle for bluster?

Xi Jinping has nothing to do other than to respond to Donald Trump and Trump has talked his way into a diplomatic trap. If he raises the tariffs higher and provokes a response, he appears to be reckless. If he only flexes his noise about the islands or Taiwan, he looks weak before the new Chinese emperor. One road takes him to humiliation; the other road takes him to conflict with an uncertain outcome. 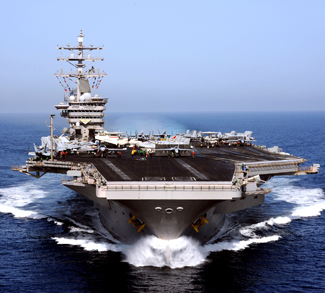