What Can Biden Do about the Uyghur Genocide?

Among the many foreign policy issues that the new Joseph Biden administration has to address, the ongoing violation of the human rights of hundreds of thousands of Uyghurs in Xinjiang (East Turkistan), will have to be a top priority. The US government has a complex and complicated relationship with the People’s Republic of China (PRC), and the situation will not improve as long as the Chinese government continues its repression of Uyghurs, and other minorities.

The adjectives used by US authorities to describe the situation have become particularly grave in the first couple of months of the new year. Case in point, on his last day in office, then-US Secretary of State Mike Pompeo used the term “genocide” to describe what is happening in Xinjiang/East Turkistan. “China is committing genocide and crimes against humanity in Xinjiang, China, targeting Uighur Muslims and members of other ethnic and religious minority groups,” the now former senior official said in a 19 January tweet.

As for President Biden, while he has not used the term “genocide” (yet) he has reportedly already called Chinese President Xi Jinping to discuss human rights in China, including the abuse of Uyghurs. Moreover, in his first press conference, the new Secretary of State Antony Blinken explained “my judgment remains that genocide was committed against the Uighurs and that hasn’t changed.” This is an important development as it demonstrates that the change of leadership in the White House has not affected US concerns over the suffering of the Uyghur population. While it remains to be seen what Washington-Beijing relations will look like under the Biden presidency, it seems that the Uyghurs will be an influential factor.

Other countries are also taking tougher stances towards Beijing. For example, members of parliament of Canada’s Conservative party are reportedly requesting the federal government to “declare that China is committing genocide and crimes against humanity through its use of internment camps and forced sterilization for Muslim Uyghurs.” In late 2020 Canada’s “House of Commons subcommittee concluded that the state’s mistreatment of Uighurs living in Xinjiang province amounts to a policy of genocide.” Some Belgian lawmakers have proposed a similar bill.

The East Turkistan government in exile (ETGE) is working hard to keep international pressure on Beijing. “We urge the international community to support our case against China at the International Criminal Court. Our complaint also highlights the systematic rape and other sexual violence against Uyghur and other Turkic women,” said Salih Hudayar, Prime Minister of the ETGE.

Various entities would like the Biden administration to apply more pressure on Beijing. For example, per a 29 January press release, the ETGE requested that the U.S. and its allies should support ETGE’s ongoing case against China at the International Criminal Court; boycott the Beijing 2022 Olympics; introduce the US declaration of genocide as an agenda for the UN Security Council; prosecute China’s diplomats in the U.S., including its Ambassador Cui Tianki, for genocide under US Code 1091; and acknowledge East Turkistan as an occupied country.

Similarly, in an interview with the author, Mr. Gani Stambekov, a human rights activist and founder of Free Kazakhs, advised Washington to maintain the pressure, otherwise “China will continue its aggressive dominance policy” and may attempt to use the Uyghur-model against other minorities in the country and support repressive activities by Beijing-friendly governments in other countries. Similar to the ETGE’s aforementioned policy proposals, Mr. Stambekov suggested Washington impose personal sanctioning of Chinese officials, and their relatives; and also designate East Turkistan, in addition to other territories in China, like Tibet and Southern Mongolia, as occupied nations.

Mr. Stambekov’s comment about Beijing’s tactics in Southern Mongolia are important to keep in mind. Beijing’s activities in Tibet are well-known, as well as the situation regarding the Uyghurs. However there have also been developments in Southern Mongolia, which is part of China as well. In early February, the Unrepresented Nations and Peoples Organization, including the Southern Mongolia Human Rights Information Center, a member of this organization, have “filed a letter of allegation with the United Nations Special Procedures regarding the People’s Republic of China’s (PRC) moves to remove Mongolian language as a primary language of instruction in schools in the so-called, ‘Inner Mongolia Autonomous Region.’”

Ultimately, these requests are pretty difficult to carry out, given both domestic and geopolitical considerations. For example, any resolution presented at the UN Security Council would likely be vetoed by China, and probably the Russian government as well.

A US boycott of the 2022 Winter Olympics in Beijing is a very provocative option, and there is already the precedent of the US boycott, along with over 60 other countries, of the 1980 Olympics in Moscow to protest the Soviet invasion of Afghanistan. In retaliation, the USSR, Cuba and several nations boycotted the 1984 Olympics in Los Angeles. It is worth noting that there are already calls for a global boycott of the 2022 Olympics, thus, this is an issue that will have to be monitored closely.

What is going on in East Turkistan now?

The situation facing Uyghurs, ethnic Kazakhs and ethnic Kyrgyzs has not improved much in recent months (for my past coverage for Geopolitical Monitor on this topic, see “In Xinjiang, Ethnic Kazakhs Suffer alongside Uyghurs,” 31 March, 2020; “Business as Usual with Beijing as Uyghurs Languish in ‘Education Camps,’” 30 December, 2019). Recent reports explain that many Uyghurs are engaged in forced labor in factories. New compounds have also been built in Xinjiang/East Turkistan, capable of housing thousands of people. Moreover, recent statements from survivors of the camps include allegations of systematic rape of Uyghur women.

One notable development is that the East Turkistan Government in Exile and the East Turkistan National Awakening Movement filed a complaint with the International Criminal Court on July 6, 2020. Nevertheless, in mid-December, the ICC stated that it would not continue with the case for the time being. This is because China is not a party to the Rome Statute, the treaty that created the ICC, hence the Court does not have a territorial jurisdiction over the crimes allegedly perpetrated there

Beijing continues to argue that it is not systematically brainwashing and oppressing the Uyghurs. Rather, the government argues that it is reforming criminals into productive members of society, and the region is socio-economically developing.

Labeling the situation in Xinjiang/East Turkistan as a “genocide” has been controversial. Not only has Beijing actively criticized the term, but even some Western publications such as The Economist challenge the appropriateness of the term. What is clear however is that the oppression of hundreds of thousands of Uyghurs, not to mention ethnic Kazakhs, ethnic Kyrgyz, and Southern Mongolians, continues. 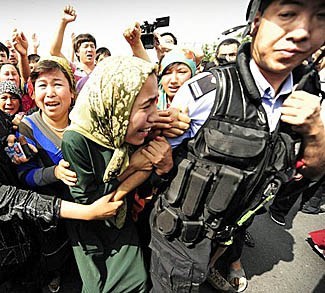