The Eclipsing of Moon Jae-in

Upon assuming the presidency of South Korea in May of 2017, Moon Jae-In had two objectives: to revive the dormant economy that had once been one of the ‘Asian Tigers,’ and to restore a warmer relationship between the North and the South. Within these two apparently separate policies is actually one single objective.

Two years into Moon’s single five-year term, his voter approval has declined from 80 to less than 50 percent. His economic policies have achieved little and his diplomatic efforts to restore warmer relations with the North are only a facade.

He can claim success in raising the per capita annual income to thirty thousand dollars, but that was accomplished by increasing the minimum wage by 30 percent. The sharp rise in the minimum wage has struck the already struggling smaller businesses, which have little capital to invest in job creation. It has also left the economy creeping ahead at 2.7 percent growth, made for a sharply declining currency, and allowed for a persistent 3.8 percent unemployment rate with youth unemployment at double the normal rate.

Moon is confronting structural barriers that are nearly impossible to overcome. The economy is dominated by forty-five family-controlled chaebols that resemble the prewar zaibatsu in Japan. These conglomerates offer the high salaried long-term employment being sought by the seventy percent of the youth who attend universities, but the chaebols are moving their investments offshore. The high labor costs and rising taxes that President Moon has fostered are making it too difficult to compete with the Chinese industry that is pushing the Koreans out of world markets. Over the past three years, the Korean auto industry has declined from the fourth- to the seventh-largest in the world.

Moon Jae-In’s one remaining hope is North Korea. Somehow, President Moon has to open the closed border to gain access to its undeveloped resources, eager twenty-five million consumers, infrastructure construction projects, and low-cost labor. Plans to rebuild the rail and highway links have been completed, but are useless unless US sanctions are lifted. The Democratic Peoples’ Republic of Korea is being held under eleven various U.S. and U.N imposed sanctions that are blocking access to the Northern economy.

At the September 2017 Vladivostok Conference that was hosted by President Putin, a possible solution to the economic problems of the two Koreas, and of Russia, was presented.  Putin proposed a linking of the regional economies through the construction of a railway line, and oil and gas pipelines from Siberia through the North to the vastly wealthier South. South Korea would gain lower cost energy supplies and a land connection to the markets of Europe. North Korea would receive five hundred million dollars in transit fees. Russia would diversify its gas and oil exports away from Europe.

China, Japan, Russia, and South Korea supported the proposal. North Korea took it under consideration which was a major shift from the traditional practice of openly refusing such ideas.

This was President Moon’s opening to act. Kim Jong-Un announced soon after that further nuclear weapon and missile testing would cease. Instead, the Hermit Kingdom would shift the developed weapons to production. Attending the Olympics in South Korea and allowing exchanges of performers added to the favorable atmosphere. It was just what Moon Jae-In needed to hear in order to assure Donald Trump that the winds of change were blowing.

President Moon found that Donald Trump was also eager to alter the relationship with Kim Jong-Un.  At the conclusion of the diplomatic performance in Singapore in June 2018, the U.S. ended joint military exercises with South Korea. The North agreed to return the remains of 55 Americans killed during the war, destroyed a no longer useable nuclear testing facility, and dismantled a rocket motor testing facility that could be rebuilt.

It was an exchange of nothings and it achieved nothing.

The second summit in Hanoi produced even less. The shortened conference ended with both sides blaming the other for the failure. Now, North Korea has tested short-range missiles, which Secretary of State Pompeo and President Trump have dismissed as inconsequential. Donald Trump is tweaking Kim Jong-Un in return by resuming joint military exercises with South Korean forces and by taking possession of the M V Wise Honest, the North Korea cargo vessel that had been held for a year by Indonesia.  These are almost wrist slaps that appear as two boxers feigning attacks, except that Kim Jong-Un has delivered an ultimatum that should not be ignored. He has let Washington know that negotiations must take a more positive course by the end of the year or North Korea will abandon the self-imposed moratorium on weapon testing.

While Donald Trump and Kim Jong-Un engage in an international probing game, Moon Jae-In is being rendered irrelevant and is running out of time to act. If he wants to regain his relevancy and to revitalize the economy, he will need to take some dramatic steps by calling Donald Trump’s bluff. Donald Trump’s and Kim Jong-Un’s theatrical performance at the DMZ at the end of June might have given Moon Jae-In a flicker of hope; but only a flicker. The American president was offering only more talks that in the past produced only more tweets.

If President Moon does take the leap and defies the US-imposed sanctions that have no standing in law, most of the international community won’t care. If he does not violate the U.N. sanctions, the member states of the international organization will not be involved. That will leave it to Donald Trump to act alone. Should he retaliate against South Korea, he could drive it out of the U.S. camp, isolate Japan, and destabilize Eastern Asia to the benefit of Russia, which is ready and willing to assume the role of arbiter between the North and the South. 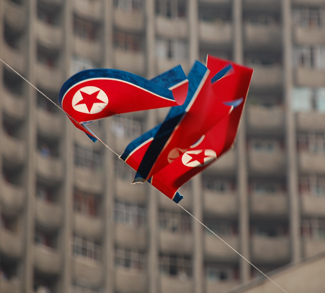