The days of the “Bill and Boris Show,” when it was considered normal (by the U.S.) for Russia to subordinate its national security interests to those of the U.S. after the Cold War’s end, are long gone. While there was no Khrushchev-like shoe-pounding on the podium during Russian President Vladimir Putin’s recent U.N. General Assembly address, rest assured, the gauntlet has in fact been thrown down. In some ways an outgrowth of his infamous 2007 Munich Security Conference speech, Putin laid out the case against costly U.S. interventions in such places as Iraq and Libya, as well as their devastating aftermath.

Due to its intolerance of regional hegemons, the U.S. has described Russia as a regional power without global significance. Only half-true, Russia, as the world’s largest country, borders more countries than even China and, as such, has overlapping spheres of interest with all of today’s great powers: China, Japan, India, and the EU. Not even the U.S. is immune from Russia’s geographic reach due to the Bering Strait between it and Alaska. Sold by the Russians in 1867, Alaska, ironically, is a legacy of past Russian-American friendship during the Crimean War when Russia was pitted against Great Britain, the hegemon of the day and the U.S.’s old enemy.

Described as “The Gendarme of Europe” at the 1815 Vienna Congress due to its security guarantor role in post-Napoleonic Europe and due to its rapid, omnidirectional territorial expansion during the previous century, it was widely acknowledged that Russia had a significant role to play in European security affairs. All the more reason why it’s inconceivable that any circumscription of its power in its near abroad would go unanswered. When this occurs in Ukraine, the country of its origin according to some, which also borders the Black Sea, an area where Western powers also intervened in the last Crimean War, Russia’s countermoves should’ve been predictable. Control of Crimea enables Russian freedom of maneuver in the Black Sea, eventually extending into the Mediterranean Sea, with ramifications for the current Syrian crisis. There appears to have been a lack of long-range strategic thinking on the part of the United States and the EU, which has made this entire situation even more tragic.

It’s analogous to asking the Chinese to not be sensitive to dilution of their rising power in the South China Sea, their near abroad which also was susceptible to concurrent Western invasions, leading eventually to the Opium Wars. They don’t relish the thought of losing at weiqi, the game of the “surrounding stones.” Much like the United States in reference to the Caribbean Sea and the Monroe Doctrine, Russia and China are both prone to project power locally to protect their own self-defined interests. Neither are keen to let their security interests be defined by others using flowery terms such as “freedom of navigation.” The last time a great power tried to project its power into the U.S.’s near abroad was called the Cuban Missile Crisis, a time when my own teenaged Washingtonian mother took part in high school nuclear drills, as if hiding under a school desk would offer protection from a nuclear blast aimed at the nation’s capital.

Their recent financial troubles notwithstanding, both Russia and China’s trillions in foreign exchange dollars give them added resiliency to jumpstart local trade initiatives. These include China’s “One Belt, One Road” initiative (Silk Economic Road and Maritime Silk Route) and Asian Infrastructure Investment Bank (AIIB), as well as Russia’s Eurasian Economic Union (EEU). Merger of the Silk Economic Road and the EEU must have resulted in new pressure to get the United States’ own Trans-Pacific Partnership (TPP) passed. The merger couldn’t really have been a surprise though, given their common origin in the Shanghai Cooperation Organization’s (SCO) formation nearly 15 years ago to deal with the dissolution of the former Soviet Union in Central Asia.

Incidentally, the EEU and Silk Economic Road converge in Kazakhstan, the largest and most resource-endowed state in all of Central Asia. This is not just the case with oil and gas, but also rare-earth metals, materials instrumental in the production of a host of civilian and military electronic items. Combined with China’s virtual monopoly on rare-earth metal production itself, Kazakhstan’s integration with both trade regimes is sure to have untold, but significant ramifications for the entire global economy. Again, chess, not checkers.

Recently, former Russian Foreign Minister and, eventually, Prime Minister, Yevgeny Primakov died. Primakov, among his other achievements, was an advocate of the “great power balancing” school of thought which stated that the U.S. could not be trusted to respect Russia’s legitimate security interests. Therefore, it was necessary for Russia, along with China, India, Iran (and possibly France) to align their interests in order to balance the United States. This was known as the Primakov Doctrine. He was subsequently dismissed from his post by Russian President Boris Yeltsin in order for his administration to appear more pro-Western. In yet another irony, he was eventually replaced by Vladimir Putin as Prime Minister, then an advocate of the “great power pragmatism” school of thought which stated that, despite differing interests, it was still preferable to work with the United States on select issues. We saw this in the aftermath of 9/11, where there were numerous U.S.-Russian initiatives, such as the potential for Russian oil and gas to replace Middle Eastern sources, Central Asian overflight rights being granted by Russia for the U.S.’s Afghanistan campaign, and intelligence-sharing to combat Islamic terrorism.

Fifteen years ago when Vladimir Putin was first appointed Prime Minister, nobody knew who he was. Now everybody does. In summary, those who think the game might be easier to play if anyone except him were the Russian President are mistaken. The alternative could be an adherent to the opposing school of thought outlined above.  Even worse, Putin himself has clearly shifted away from his original thinking on US-Russian relations during his time in power, having borne witness to issues such as Kosovo, Iraq, NATO expansion, “color revolutions” (Georgia, Ukraine, and Kyrgyzstan), and missile defense. Luckily, the shift is not yet complete. The overriding US objective with him now should be to foster a long-term working relationship based on shared strategic interests. The alternative scenario could be much worse and we could arrive there much more quickly than currently imaginable. 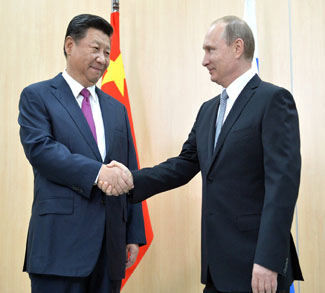