Summary
This report examines the Rwandan genocide in a geopolitical context including the roles of Western powers, multinational corporations, and International Financial Institutions.

Setting Up Base in Central Africa

Uganda was for decades a colony of the British Empire until it achieved independence in 1962. At this time, “Uganda’s was one of the most promising economies in sub-Saharan Africa, with a sound agricultural base, developing industries, and a significant mining sector. Agriculture was an important foreign exchange earner through the export of coffee, cotton and tea while at the same time providing basic self-sufficiency in food. The manufacturing sector produced inputs for the agricultural sector and consumer goods, and was becoming a significant source of foreign exchange through the export of textiles.”[1]

In 1971, Idi Amin came to power in Uganda. Amin, widely considered a brutal dictator, lasted until 1979, when the Tanzanian army and the United National Liberation Front ousted him. In December 1980 Milton Obote assumed power for the second time. The economy was in a deep crisis and infrastructure was severely damaged from the war.[2]

Obote looked to the International Financial Institutions to help reconstruct the economy This “led to the introduction of an economic reform package in mid-1981, a typical IMF/World Bank Structural Adjustment Program with considerable donor support. The centrepiece of the Program was a massive devaluation of the Ugandan shilling, from 7.80 to US$1, to 78.00.”[3] By 1984, the shilling was devalued to be worth USh (Ugandan Shilling) 270 for every US dollar.

Following these actions, Uganda again plunged into financial crisis. “Eighteen months after the collapse of the IMF program and the subsequent military coup, the National Resistance Army (NRA), which had been involved in a civil war, took over control of the Ugandan capital. Its political wing, the National Resistance Movement(NRM), established a government with a platform of national unity and broad-based economic reform.”[4]

Yoweri Museveni, head of the National Resistance Council (NRC), was sworn in as president on January 29, 1986. Museveni’s government “agreed on a new policy package with the IMF and the World Bank in early 1987, formalized in an Economic Recovery Program introduced in May 1987.”[5] In October of 1987 Museveni met with US President Ronald Reagan and then Vice-President George HW Bush at the White House.[6]

Uganda’s economic ‘recovery’ program had the aim of giving the International Financial Institutions a strict hold on the country. The external debt spiraled overnight, increasing almost threefold to 3.7 billion by 1997.”[7] Uganda’s debt to the World Bank was 2 Billion dollars. The loans to the country “had been tagged to support the country’s economic and social reconstruction.”[8]

With World Bank oversight, the money that was supposed to go toward programs promoting social and economic growth was diverted into funding the United People’s Defense Force (UPDF) that was involved in military operations in Rwanda and the Congo. Uganda became a proxy state for US covert actions in East Africa. The IMF and World Bank ensured adequate Ugandan military funding.

The Rwandan genocide occurred in 1994, but rose out of events in the late 80s and early 90s relating directly to Rwanda’s economy. This event was triggered by the assassination of Rwandan President Habyarimana in 1994, who was President during the1990 to 1993 civil war.

Due largely to its colonial past Rwanda’s economy is highly dependent on coffee exports and widespread divisions exist among its people. Most notable is the division fostered between the Hutu and the Tutsis, which began in 1926[9] as part of a Belgian strategy to “fuel inter-ethnic rivalries as a means of achieving political control…”[10] The Belgians favoured the Tutsis over the Hutu.

In 1962 Belgium gave up Rwanda and the Tutsis lost their monopoly of power, giving rise to Hutu control. Many Tutsis were expelled from office.[11] “In 1973 Hutu military leader, Juvénal Habyarimana and a group of his followers, executed a successful coup. Habyarimana and the Hutu elite led Rwanda through almost two decades of economic prosperity.”[11]

Deliberations were undertaken between Habyarimana’s government and the IMF and World Bank. The World Bank sent a group to Rwanda in 1988 to “review Rwanda’s public expenditure program,” and they implemented a Structural Adjustment Program with many conditions.[13]

This coincided with the start of the Rwandan Civil War (1990-1993), which formed as the Hutu aristocracy became divided against each other.”[14] At the same time, a “guerilla group comprised of a majority of Tutsi refuges trained in Ugandan camps, [the] Rwandan Patriotic Front (RPF), invaded Rwanda and attempted to reach the capital Kigali.” The result was a weakening of Habyarimana’s regime and civil war.[15]

The November 1990 Structural Adjustment Program was implemented in this politically unstable context and required a 50 percent devaluation of the Rwandan franc. This was “barely six weeks after the incursion from Uganda of the rebel army of the Rwandan Patriotic Front (RPF).” The economic shock exacerbated the civil war and resulted in massive inflation and significant increases in the price of fuel and food.[16]

“State enterprises were pushed into bankruptcy and public services collapsed,” including health and education.[17] In 1992, during the height of the civil war, the IMF ordered a second devaluation, which led to further price increases. In a single year coffee production tumbled by another 25 percent. Because so much land was dedicated to coffee there was not enough available to produce food.[18]

Widespread famines followed, which in turn led to the implementation of a World Bank and IMF Structural Adjustment Program requiring the liberalization of trade, economic deregulation, and cheap food imports and aid, which destabilized local markets.[19]

Under the Structural Adjustment Program Rwanda signed onto with the donor institutions, large loans were given to the Rwandan Central Bank for importing commodities. Many of the loans were “diverted by the regime (and its various political factions) towards the acquisition of military hardware (from South Africa, Egypt and Eastern Europe).”[20]

The years of the Rwandan Civil War and the genocide itself took place during a time when Madeline Albright was Bill Clinton’s Ambassador to the United Nations and Kofi Annan was the head of the UN’s peacekeeping operations. Investigative journalist Wayne Madsen alleged in his book, Jaded Tasks: Brass Plates, Black Ops, & Big Oil, that Albright and Annan ignored evidence that the US backed Tutsi-led Rwandan Patriotic Front (RPF) was responsible for the April 6, 1994 terrorist missile attack on the aircraft carrying the Hutu president of Rwanda.[21]

Madsen explains that the initial RPF invasion of Rwanda from Uganda in 1990, “had the military backing of the first Bush administration [1989-1993], including Secretary of Defense Dick Cheney,” and that the aim of the RPF was to overthrow Rwanda’s Hutu president.[22] Madsen exposed how the RPF deputy leader, Paul Kagame was trained at US Army installations in the United States and when, during the 1990 invasion of Rwanda, the RPF’s leader was killed, “Kagame became the head of the guerrilla army, and his ties with the Pentagon, CIA, and State Department became closer.” Classified UN documents revealed that Annan and Albright were aware of this information.[23]

It came out in a French National Assembly inquiry that, “the U.S. even supplied the RPF with the Soviet-made surface-to-air missiles that were used to shoot down the Rwandan presidential aircraft,” and that a UN investigation team got a hold of information that, “a company linked to the CIA leased the warehouse used to assemble the missile launchers.”[24] The investigation was closed down once the relationship to the US was realized.

In 2004 a French investigation was completed on the shooting down of the plane, and as Madsen explained, those who were close to the investigation had revealed a disturbing connection to what Madsen describes as a “shadowy organization” composed of powerful political and oil interests, commonly known as the “International Strategic and Tactical Organization.”[25]

Less than a year after the 1994 massacres Rwanda’s creditors approached the Tutsi-led RPF government regarding the debts of the former regime that had been used to finance the bloodshed. “The Tutsi-led RPF government, rather than demanding the cancellation of Rwanda’s odious debts, had welcomed the Bretton Woods institutions with open arms,” because, “They needed the IMF ‘greenlight’ to boost development of the military,” which is exactly where the new loans went.[26]

The genocide was successful in its intentions, as the French-supported Hutu Habyarimana government was replaced with a US-supported Tutsi Paul Kagame government, with the aid of US special forces and CIA. The situation should in fact be viewed as, “an undeclared war between France and America.”[27]

The aim was to “install an Anglo-American protectorate in Rwanda,” which, “enabled the US to establish a neocolonial foothold in Central Africa.” This was successfully achieved, as the language of the private and government sectors switched from French to English.[28] 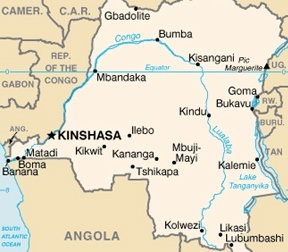