Pakistani President Pervez Musharraf’s decision to resign rather than face impeachment by parliament will have both domestic and international implications: a political power vacuum for a fractious Pakistan, and the loss of a once indispensible ally in the “war on terror” for the US.

On Thursday, government officials and a member of Musharraf’s circle noted that Musharraf would resign instead of facing impeachment, attempt to remain in Pakistan, and evade criminal prosecution at the hands of a parliament dominated by the Pakistan People’s Party (PPP) and the Pakistan Muslim League Nawaz (PML-N).

However, elation over Musharraf’s departure will give way to somberness once the dust settles and the stark reality of a political power vacuum is revealed.  Pakistan’s tenuous ruling coalition, which won elections in February, faces an uphill battle in forming a cohesive government once the only thing uniting them—opposition to Musharraf—is gone.

Rivalry between the corruption-plagued leaders of the PPP (Asif Ali Zardari, widower of Benazir Bhutto) and PML-N (Nawaz Sharif) will no doubt resurface in disagreement over the reappointment of Pakistan’s judiciary, the handling of economic and security woes, and cooperation with the US in the “war on terror”, adding to the fractious nature of an ethnic and religiously plural Pakistan.

Musharraf’s departure and Pakistan’s ensuing domestic developments will also present a setback for the US in its ongoing “war on terror” in the region.  The US has a close ally in Musharraf, who fought against al-Qaeda, the Pakistan Taliban, and other Islamic extremists within Pakistan and along its lawless Afghan border.  But it remains to be seen whether the coalition will continue Musharraf’s cooperation with the US or review its pro-US policies.  Furthermore, the US is concerned whether such a government will remain united long enough to keep the nuclear-armed Muslim state on course to combat militancy or fall victim to a possible military coup led by radical elements of Pakistan’s military.

Washington has also remained silent about Musharraf’s imminent demise and thrown its support behind the coalition in order to ensure a continued working relationship with Pakistan, although reports have surfaced that US and British diplomats are covertly seeking a safe exit for the dictator.  Asylum in Saudi Arabia and Turkey are also on the table.  Nonetheless, having relied too heavily on Musharraf the personality, Washington will have to devise a fresh strategy with a post-Musharraf Pakistan by reigning in its own unilateral activities—CIA renditions, US airstrikes, and “hot pursuit” operations—and allow the coalition to find its footing and chart future initiatives on its own terms.

In 1999, General Pervez Musharraf seized power during a bloodless military coup d’etat, sweeping out a weak, corrupt civilian government headed by then Prime Minister Nawaz Sharif.  Musharraf promised that military rule would be short-lived, paving the way for true democracy in Pakistan, however this promise remained short-lived.

After 9/11, Musharraf severed ties with the Pakistan Taliban and pledged to combat Islamic extremism at the behest of the US.  His work was rewarded by the US with an upgrade in Pakistan’s status from sanctioned pariah to multibillion dollar supported ally.  Meanwhile, Pakistanis condemned his work as that of a pro-Western dictator that enabled the US to curtail Pakistan’s sovereignty and entrench itself in the region, causing increased violence and instability.

Since February 2008, the democratically elected civilian government has reigned in Musharraf. On August 8th, coalition leaders said they would seek to impeach the president for imposing a state of emergency last November, firing senior judges, and other alleged crimes including violation of the constitution and gross misconduct.

America is stubbornly defending its right to pick the next boss of the World Bank, despite mounting pressure from a coalition of 10 developing countries demanding an equal voice for the poor in decision-making, leaked papers reveal.

The West has threatened to revoke Russia’s membership in the G8 as punishment for the country’s ‘military incursion’ into Georgia.

Six members of a government crime-fighting unit have been arrested on suspicion of working for a powerful drug cartel run by the country’s most-wanted man, the attorney general’s office said on Wednesday

President Bush held a press conference Monday denouncing Russia’s escalation of violence in the former Soviet republic of Georgia. He pressed Moscow to accept an immediate cease-fire and to pull back its troops.

Banks’ losses from the U.S. subprime crisis and the ensuing credit crunch crossed the $500 billion mark as writedowns spread to more asset types.

The Federal Reserve has auctioned another $25 billion in loans to the nation’s banks and given them more time to pay the money back in an effort to combat a serious credit squeeze.

The US denied a Russian suggestion Thursday that US military trainers were linked to a Georgian attack on South Ossetia and that some of them may have been killed.

A senior official with the US Defense Department has dismissed reports that Washington is planning a naval blockade of Iran.

Bolivian President Evo Morales and opposition regional governors agreed on Wednesday to meet to try to ease a bitter power struggle that has gripped the South American country all year.

Seven people were killed and nearly 50 wounded in the most serious Colombian guerrilla attack this year when a bomb exploded in a small town as residents celebrated a festival, officials said on Friday.

The European Union could send peacekeepers to the breakaway region of South Ossetia to help enforce a ceasefire between Russia and Georgia.

Britain’s honeybees have suffered catastrophic losses this year, according to a survey of the nation’s beekeepers, contributing to a shortage of honey and putting at risk the pollination of fruits and vegetables.

Investment bank Merrill Lynch may not have to pay UK tax for decades.  The Wall Street giant, which employs 5,500 in the City of London, could be eligible for a tax holiday of more than 50 years after making billions of pounds of losses on ‘exotic investments.’

Several Georgian state computer servers have been under external control since shortly before Russia’s armed intervention into the state commenced on Friday, leaving its online presence in disarray.

Russian armored vehicles rolled deep into western Georgia on Monday, quickly taking control of several towns and a military base and slicing open a damaging second front in Russia’s battle with Georgia. Other Russian forces captured the key central city of Gori.

Russian troops and paramilitaries thrust deep into Georgia on Wednesday, rolling into the strategic city of Gori and violating the truce designed to end the six-day war that has uprooted 100,000 people and scarred the Georgian landscape.

Poland and the United States reached an agreement Thursday that will see a battery of American missiles established inside Poland, the prime minister said, announcing a plan that has infuriated Russia and raised the specter of an escalation of tension with the region’s communist-era master.

A top Russian general on Friday said Poland’s deal with the United States to set up parts of a missile defense shield on Polish territory lays it open to a possible military strike, a Russian news agency reported.

The United States is sending fresh supplies of weapons to Georgia from its base in the Jordanian port of Aqabah, according to Israeli papers.

The US and British diplomats are covertly seeking a graceful exit for the Pakistani President Pervez Musharraf, reports say.

US military planes have been making secretive landings in Kenya in what is feared to be an effort to move terror suspects.

Zimbabwe’s political rivals are expected to resume power-sharing talks on Saturday on the sidelines of a regional summit in South Africa with pressure mounting to find a way to end the country’s political crisis.

US in Hot Pursuit of Pakistan Taliban across the Afghan Border 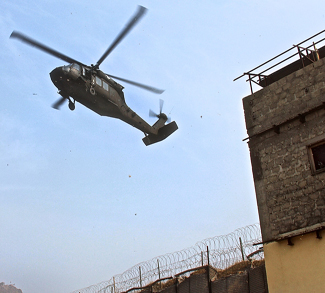 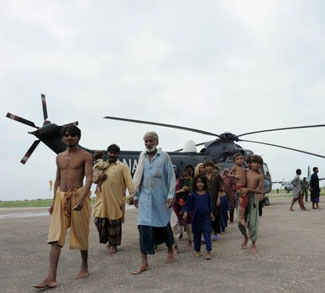