Marxism in the 21st Century: Dead or Alive? 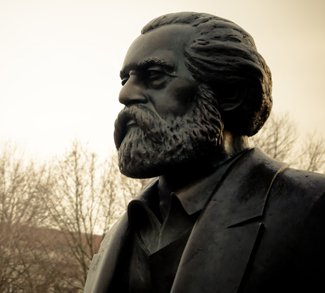 As Karl Marx’s ultimate achievement (or failure) seems to be the Russian Revolution, it is perhaps timely to ponder 100 years later about Marxism’s current relevance.

Understandably, this exercise will be seen by many as a waste of time. The fall of the Soviet Union and the subsequent dismantling of communism as a world political force appear to be events strong enough to have sent Marxism to Trotsky’s proverbial dustbin of history. From this perspective, it is not surprising how quickly the whole amalgam of Marxist theory dealing with doctrine and praxis, that was printed, diffused, taught and discussed in Western academic and political circles, evaporated in the early 1990s.  Marxist theory fundamentally lost appeal because it was intimately associated with a vast political failure.

Yet, there are two current world events, as important as the fall of the Soviet Union, that also need to be considered in this analysis.  First, the growing inability of capitalism, particularly its American distilled version, to answer the social and economic aspirations of extensive sectors of the population in North America and Europe, as demonstrated by the aftermath of the Great Recession of 2008.  More compelling, the economy with the leading edge in the world (China) follows an economic model (socialism) fundamentally different from conventional capitalism and, to add insult to injury, still maintains within its theoretical framework a reverence (albeit discreet) for Marx’s thought.

If the debate on Marxism’s relevance is therefore worth considering, we should briefly examine what Marxism is all about.

Only traditional political opponents to Marxism assign to it a uniformity that it never had.  Marxists, on the other hand, used to collide in distinguishing and dissecting Marxism in abstract and in the context of political tactics and strategy.  For instance, some emphasized the thoughts of the young pre-1848 Marx (particularly on alienation), whereas others would only consider the socio-economic analysis that culminated in Capital.  Others were dazzled primarily by Marx’s philosophical thought and built theoretical schools around dialectic materialism.  More significantly, differing social analysis and political action led to numerous breakdowns around the confrontation between reformist social democracy and revolutionary Marxism.

Beyond its potential interpretation value, it is also worth considering if Marxism still has a role as a functioning political tool.

It can also be argued that classical Marxism was buried in the early days of the Russian Revolution. The Soviet upheaval meant political events that did not coincide at all with Marx’s predictions: a social earthquake in a poor and backward country (not in a wealthy, advanced western industrialized society as he had prophesized) and a revolution that for several decades, contrary to Marx’s predictions, did not become a world event. Additionally, the tactical alliance between workers and peasants, a fundamental scheme of the Russian Revolution, did not enter into Marx’s political or theoretical play the way it was schemed by the Bolshevik leaders or in early Communist China.

Timing explains to a great extent the gap between Marx’s predictions, the political events that he inspired in Russia, and the aftermath of the October Revolution. The Russian Revolution took place 50 years after the first publication of Capital. While the economic environment described by Marx was still predominant at the time of the Revolution, that has not been the case during the last 50 years. Marx’s economic analysis was focused on a world dominated by manufacturing. Marx did not (or could not) see the potential value added from trade related activities. This of course is more evident today as services play a growing economic role through international trade and world finance. As our globe is different from Marx’s, it is difficult to assign predictive power to Marxism as it claimed to have 100 years ago.

As an interpretation instrument, however, Marxism seems to be a different matter. At the root of Marx’s thoughts was the belief that economic conditions play a significant role in social evolution and, therefore, there is a need to understand these conditions not only for analytical purposes but also as a basis of political action.

From this perspective, events such as the ongoing and growing dislocation of the American political system or the increasing political resistance to globalization efforts through projects such as the European Union are easier to understand. Growing world unemployment (in some European countries currently at levels similar to the ones during the Great Recession of 1929), the perceived divorce between power elites and people’s aspirations, and the widening wealth gap can help grasp the roots of these political conflicts.

Beyond its potential interpretation value, it is also worth considering if Marxism still has a role as a functioning political tool. To assess this, we need to consider one of the classical controversies around Marx’s thought, that is his views on human nature. Marxists believed that material conditions explain to a great extent failures on social progress. This belief was criticized for denying or at least minimizing the value of political action, i.e. human will. Although this controversy never subsumed and has being used numerous times by Marx’s detractors, political action was never denied by Marx and he himself was a major political player, for instance at the time of the Paris Commune and as founder of the First International.

To assess the value of Marxism as political praxis, we need to remember that a political device, to be effective, does not need to have a scientifically proven theory behind it. A good example is religion, the most un-scientific belief, as basis for political action. Although Marx dismissed the value of religion, he was well aware of the role it played in social change during the European religious wars. Faith in a better world or in the afterlife not only moves mountains, but also topples governments and changes societies.

Growing awareness of the socio-economic failures of today’s western social architecture gives validity to Marxism as a potential political tool. As long as people believe that there is unfairness and exploitation, right or wrong, Marxism will have a role to play as a theory capable of justifying political action. Even if Marxism is perceived as a failure as a result of the demise of the Soviet Union and its Eastern European satellites, or even if Marxism is dismissed as lacking economic or scientific soundness, its political and interpretative value still seem relevant to many today.