On April 4, Libyan ‘Field Marshal’ Khalifa Haftar ordered his armed forces in Cyrenaica to move closer to Tripoli, where the United Nations-backed government is based. After the announcement, the Libyan National Army (LNA) occupied Gharyan (100 km from Tripoli) peacefully and started to engage local forces near the capital. The United Nations (UN), the European Union (EU), and Italy are deeply concerned about the situation and its progress, especially because it risks further regional instability and the potential failure of the UN road map for peace.

Why did Haftar start this campaign? What are the consequences?

First of all, Haftar announced his new military campaign when the UN Secretary General, Antonio Guterres, was in Tripoli to meet Prime Minister Al-Sarraj and visit some Libyan detention camps for migrants. The reason may be to send a strong message to Guterres because, on March 30, he publicly stated that a political agreement between Al-Sarraj and Haftar was closer.

By initiating a military campaign against Tripoli, Haftar reaffirmed his central strategic role in the country and sent a strong message to Al-Sarraj’s supporters and allied militias westwards. He also compromised Guterres’ visit to Tripoli.

Another reason might be to influence the upcoming national conference. The UN envoy, Ghassam Salamé, has been working on this conference for months and the Italian government emphasized its importance during the Palermo summit last November. The national conference should take place next week in the southwestern city of Ghadames; it’s aimed at reducing local tensions and promoting national political elections.

Haftar’s new military offensive to occupy Tripoli could be focused on undermining Al-Sarraj’s role as prime minister, his credibility, as well as his negotiating leverage during the conference (if it ever actually takes place).

Thanks to his increased influence in the strategic southern region of Fezzan and his occupation of key oil fields (with France and Egypt’s indirect support), Haftar’s intention could be to occupy Tripoli and force the prime minister to resign. Haftar’s influence is already significant in Cyrenaica and it’s increasing in Fezzan. Occupying the western region of Tripolitania could enable him to gain control over the entire Libyan territory.

However, not all the militias and tribes in Tripolitania would accept him as leader or as commander-in-chief of a national army. Though Haftar might be able to occupy Tripoli, it would be hard for him to keep western cities and the surrounding region under effective control, especially Misrata. Much of the population still harbors the old historical rivalries between Tripolitania and Cyrenaica.

It is not clear yet why Haftar has decided to move westwards because just few weeks ago, both Al-Serraj and Haftar met in Abu Dhabi and agreed to promote elections. However, political and diplomatic efforts for stabilization always came with clashes and sub-urban violence (i.e. tensions near south Tripoli between Al-Sarraj’s forces and the Tarhuna 7th Brigade just before the Palermo Summit).

What remains obvious however is Haftar’s intention to reaffirm his strategic role in the country and emphasize Al-Sarraj’s political weakness.

When it comes to Italy’s foreign policy in Libya, Rome risks losing credibility in the Mediterranean region due to Al-Sarraj’s waning influence and support among local elites. He has been unable to unify the country and could even be at risk of being defeated in the new offensive. Even if Haftar’s military campaign should not be successful or be stopped, the UN and Italy’s long-term political project to unify Libya under Al-Sarraj’s government will be hugely affected. After all, Haftar still controls approximately 70% of the country’s territory.

If the national conference does not take place, the Palermo Summit would be a definitive failure with significant political consequences for Italy’s role in the region. When Haftar did not join the summit, it was expected to end in failure because he is the ‘strongman’ of Libya. However, it was not expected to unfold like what we’re currently seeing. If Haftar’s forces occupy Tripoli, the current Libyan government would be toppled and Italy’s policy failure would be laid bare.

At the economic level, Italian oil companies may be forced to renegotiate terms and conditions of contracts, while the Italian government would also have to renegotiate strategies and approaches toward migration flows with an unfriendly partner in Haftar.

France, on the other hand, would benefit strategically from the success of Haftar’s campaign in the Fezzan, along with Russia and Egypt. If the LNA should occupy Tripoli and Haftar gains the support of local actors to govern the country, he would politically and economically favor allies like France rather than the previous supporters of Al-Sarraj (Italy).

So what should the Italian government do?

Since 2016, Al-Serraj has strived unsuccessfully to gain the support of key political actors (the tribes) throughout the country. Only a few decided to support him. The Libyan Prime Minister is politically weak. Haftar, on the other hand, now controls about 70% of Libya, as including key strategic cities and – most importantly – the oil fields. Only by defeating the LNA on the ground could Al-Sarraj regain some of his lost influence and credibility.

The UN road map, which aimed at unifying Libya under a central political authority, now looks nearly impossible to implement. This idea originated from the Italians in 1911, when they tried unsuccessfully to unify all the regions and centralize power. The only figure who currently has any chance to govern the entire territory may be Haftar, but this would have significant political and diplomatic consequences, both regionally and internationally, and Italy risks losing its former influence in Tripoli.

If Haftar fails to unify the country by force, the only possible solution might be a division of the country into three different regions and the promotion of a federation. It would seem that this suits Libya, a country that is historically divided into tribal areas and regions, with municipalities and local councils rather than national institutions.

**This article was written on April 6. The UN conference on political reconciliation in Libya has since been postponed until the fighting is resolved.

Libyan Elections: Are the Abu Dhabi Meetings a Turning Point?

Calderon, Nieto, and One less Zeta: Recent Shifts in the Mexican Drug War 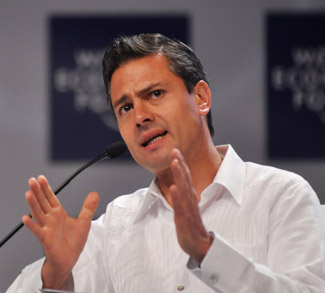