Last week, the President and military chief of Guinea-Bissau were assassinated within hours of each other.  The double-assassination leaves a power vacuum in the impoverished west African nation, which Latin American drug cartels threaten to replace with a narco-state.

President Vieira and General Waie were power ivals in the tiny former Portuguese colony of only 1.6 million in west Africa.

General Waie was assassinated by a bomb blast at army headquarters, resulting in Guinea-Bissau soldiers raiding the President’s home, assaulting him, and then assassinating him by gunfire.  As there had been a previous assassination attempt on General Waie by armed presidential militia in January, army soldiers reacted immediately on the assumption that the current attack on their commander was ordered by his rival, President Vieira.

Yet the assassination attempt in January appeared to be a response to a failed military coup attempt in November 2008, a week after parliamentary elections were won by President Vieira’s party.  Ironically, the November 2008 failed military coup also included an attempt to assassinate Vieira in his home.  Mutinous soldiers breached the President’s personal security, but failed to reach the room in which Vieira was holed up.

Monday’s double-assassination creates a power vacuum in the African nation.  There is some speculation that the bomb blast that killed General Waie may have been the work of drug cartels operating in Guinea-Bissau aligned with Vieira.  The President was accused by his political rivals of being personally involved in the drug trade.

In recent years, exploiting tiny Guinea-Bissau’s weak economy, almost non-existent security apparatus, and a weak or compromised, political infrastructure, Latin American drug cartels began moving into the country, using the west African nation as a major hub for importing drugs into the European Union, according to the United Nations.

The machinations of the drug cartels that increasingly appear to be in de facto control in Guinea-Bissau threatens to collapse the tiny nation as a failed narco-state.  The cocaine trafficking in Guinea-Bissau is estimated to be worth more than a billion dollars, multiple times more than the total GDP.  Because Guinea-Bissau has the world’s fifth-worst economy (measured by GDP) and measures third-worst on the UN Human Development Index with two-thirds of the population living in poverty, the funds produced by the drug trade will be part of Guinea-Bissau’s economy for decades to come.

So, after yet another military coup, ostensibly orchestrated to rout out the drug-cartels, and possibly supported by Western powers, expect a renewed albeit uneasy truce between the drug lords and the Guinea-Bissau political-military power hierarchy. 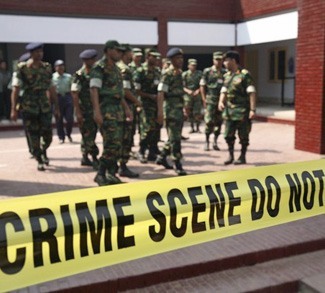 Situation Reports November 25, 2013
Back to Top