With the world’s attention focused squarely on Ukraine, the leaders of the five BRICS nations – Brazil, Russia, India, China, and South Africa – met virtually at the 14th Summit, hosted by Chinese President Xi Jinping. While some of the focus of the meeting was centered on the possibility of expanding the group into Iran, Argentina, and/or Pakistan, India was able to steer clear of the rancor raised by their Chinese and Russian counterparts at Western countries, instead focusing mainly on the humanitarian situation unfolding in Ukraine.

Modi, who met with G7 leaders in southern Germany, managed to avoid the diplomatic pitfalls that would have been injurious to India’s relationship with the United States. Likewise, refraining from joining the Western chorus on Russia while knowing Moscow would be the principal target of criticism at the G7 allowed India to balance two delicate bilateral relationships.

For several weeks, the focus of the Summit was oddly centered on whether the Summit would be held in person, as delicate opportunities for negotiation could have taken place, something China was banking on. India and China remain in a tense standoff in Eastern Ladakh, where China remains on the other side of the Line of Actual Control. Chinese refusal to make a withdrawal in advance of the BRICS Summit may have dissuaded Modi from an in-person visit. Furthermore, India and China have not been able to agree on the next level (16th round) of corps commander-level talks, after the 15th round was held in March this year. The military and diplomatic level talks between the two sides have failed to make any progress as fundamental disagreements continue between the two sides.

These persistent differences are now playing more openly in impacting bilateral and multilateral meetings between India and China. On issues of counterterrorism, maritime rights, sovereignty, and the Belt and Road Initiative (BRI), differences between China and India tend to get starker. Most prominently, the recent step by China to block a joint proposal by India and the US to designate Pakistan-based top LeT militant Abdul Rehman Makki as a global terrorist under the UN sanctions committee loomed large over any effort to further counterterrorism cooperation through the BRICS. With discussion of a possible expansion of BRICS, set to include Iran and Pakistan, the counterterrorism agenda within BRICS is unlikely to come to fruition. Additionally, India’s growing counterterrorism commitments within the Quad will provide New Delhi with stronger rationales to chart a different course on cooperation on fraught issues which have differentiated positions among the BRICS member states.

India had been making a point of reminding Beijing of its commitments to international law, as External Affairs Minister S. Jaishankar pointed out in May that “BRICS has repeatedly affirmed respect for sovereign equality, territorial integrity, and international law. We must live up to these commitments.” China had been keen to downplay events along the border with Western China, with the Chinese Communist Party (CCP) mouthpiece Global Times noting that “China and India should not let the border issue define or affect the overall development of the bilateral relationship.”

The India-China dispute in Eastern Ladakh has in many ways hurt the ability of BRICS countries to coordinate policy routinely or more broadly make disruptions to the Western-led economic and geopolitical status quo. Animosities run beyond Chinese troops along the LAC. India and China compete in other fora; in the United Nations Security Council for example, with China refusing to support India’s Permanent Member status. In turn, India has been less than supportive of China’s expensive Belt and Road Initiative (BRI).

Frustrated with the lack of progress and coordination ahead of the virtual Summit, China had proposed a widening of the bloc, with Pakistan at the top of the list. China invited Pakistan to attend the “High Level Dialogue on Global Development,” but India blocked their attendance, to the dismay of the Chinese. Modi has made delaying China’s effort to expand BRICS a priority, suggesting instead that the group first define the qualifications for new members first. On Monday, Iran applied for membership, a proposition that might intrigue New Delhi, particularly after Iran-India ties warmed after Iranian Foreign Minister Dr. Hossein Amir-Abdollahian paid an official visit to India in early June, meeting with Jaishankar.

Although India is not against BRICS expansion if the idea furthers the true spirit of multilateralism, the possible inclusion of states like Iran and Pakistan to the BRICS may narrow India’s choices and maneuverability within the group. An expanded BRICS then would include four states which either remain opposed to the West or are drawing closer to China: China, Iran, Pakistan and Russia. For India, squaring its participation in the BRICS with its participation in West-led groups like the G7 within a week last month perhaps depicted a subtle challenge that lies ahead for India. As the fault lines in the global political, economic and military order get starker – with the ongoing Russia-Ukraine war possibly precipitating such exigencies – BRICS as well as its expanded form in the future may come to be a much-constricted space for exercising India’s global and regional choices.

Lastly, China’s tendency to drag bilateral issues into multilateral mechanisms like the SCO and BRICS may help it shape larger geopolitics in the future, but it does not augur well for the healthy functioning of the multilateral organization. As such, India’s ability to cooperate with the West-led groups blunts Chinese designs.

Mark S. Cogan is Associate Professor of Peace and Conflict Studies at Kansai Gaidai University in Osaka, Japan. He is a former communications specialist with the United Nations, serving in Southeast Asia, Central Asia, Sub-Saharan Africa, and the Middle East.

Vivek Mishra is a Fellow with Observer Research Foundation’s Strategic Studies Programme. His research interests include America in the Indian Ocean and Indo-Pacific and Asia-Pacific regions, particularly the role of the US in security in South Asia, Indo-US defence relations, and the Indian defence sector. 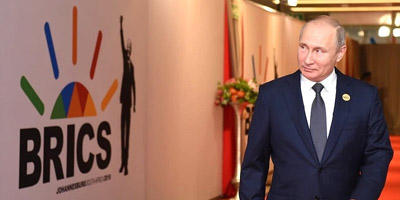