The recent establishment and operation of the United States Africa Command (AFRICOM) signals the militarization of U.S. foreign policy in Africa.

African leaders suspect that AFRICOM’s security initiatives are a pretext for U.S. efforts in extending the war on terror, securing oil, and countering China’s growing influence in Africa.  AFRICOM has responded with PR stints emphasizing the altruism of their security and development initiatives.

Analysis
As AFRICOM prepares to become fully operational in October 2008, it has engaged in a series of public relations exercises aimed at gaining African support for its security initiatives and dispelling concerns that the U.S. military will infringe on African sovereignty and establish large bases on the continent.

Many African countries like South Africa, Libya, and Nigeria have openly opposed the idea of more U.S. troops on African soil and the hosting of AFRICOM’s headquarters since the command’s establishment last October.  Only Liberia has publicly supported AFRICOM, which has resulted in AFRICOM’s headquarters remaining in Stuttgart, Germany for the foreseeable future.

Amid rising criticism and hostility, AFRICOM released a posture statement in March stressing the command’s role in creating good governance via training of African security forces and assisting in development.  And at the U.S.-African Defense Policy Dialogue meeting two weeks ago, AFRICOM Commander Gen. William Ward assured his African peers that AFRICOM “will maintain a light footprint in Africa”.

This point has been underscored by two AFRICOM navy ships currently providing humanitarian assistance and training during a six-month cruise to seven countries in the Gulf of Guinea.

But many African leaders are not convinced of AFRICOM’s altruistic motives.  There are strong suspicions that AFRICOM will help the U.S. expand the global war on terror, secure access to African oil, and counter China’s growing influence.  Political and economic trends and statements made within the U.S. defense community lend credence to such suspicions.

Since 9/11, the U.S. has dramatically increased military activity in Africa, targeting al-Qaida and other transnational terrorist groups in North and East Africa in an attempt to stem its growth.  The Combined Joint Task Force-Horn of Africa has been conducting counter-terrorist activities in East Africa since October 2002 and a Congressional Research Service report released in May 2007 revealed that the U.S. recently established military, counter-terrorism, and intelligence programs in dozens of African countries.

At a February conference on the process of organizing AFRICOM, U.S. defense officials cited the Joint Task Force-Horn of Africa as a model for what AFRICOM could accomplish across the continent.

The increasing importance of African oil to American energy needs is another trend shaping U.S. policy in Africa.  The U.S. gets more than 15 per cent of its oil from Africa, a figure expected to grow to 25 per cent by 2015.  Defense officials have expressed the importance of preventing disruptions in African oil production and exports and cited the task as one of AFRICOM’s chief missions.

Competition for oil has also influenced U.S. policy in Africa, and China has posed the biggest challenge.  As the world’s second-largest importer of oil, China is tapping into African energy sources and engaging in trade.  As a result, China has become Africa’s third largest trading partner and contributed significant foreign direct investment.  This growing Sino-African relationship undermines U.S. political and economic reforms by providing Africans with an alternative.

AFRICOM is a projected response to Chinese interests, and analysts predict that Africa will become the battleground for an economic proxy-war between the U.S and China.

Prior to its creation, three Unified Commands (European, Central, and Pacific) divided responsibility for U.S. military operations in Africa because of the view that Africa was marginal to larger security concerns.  This stemmed from the Cold War, when African countries were merely pawns in proxy-wars with the Soviet Union.  After the Cold War, Africa was largely neglected by the Department of Defense.

In 2006, Defense Secretary Donald Rumsfeld recommended the establishment of a new Unified Command for operations in Africa as a result of decade-long Pentagon analysis noting Africa’s increasing strategic importance.

President Bush authorized AFRICOM and it was established October 1, 2007 as a sub-unified command of EUCOM but will be fully autonomous and operational by October 1, 2008.  AFRICOM will have military relations with 53 African nations, save Egypt, which falls under CENTCOM because of its importance in Middle East affairs.

With a projected budget of $389 million for 2009, AFRICOM will continue to evolve and grow in the face of opposition. 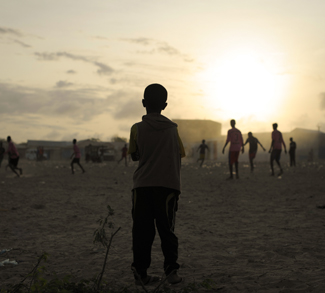 New Delhi and Beijing’s Struggle for Influence over the Maldives

Situation Reports February 19, 2018
Back to Top